As storm rushes in, airlines cancel while salt sellers gain 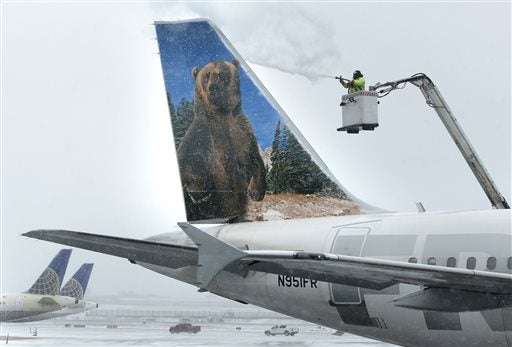 Businesses large and small are feeling the effects of a huge snowstorm sweeping into the Northeast Monday. For some, wintry weather is derailing activity: Airlines canceled thousands of flights. Car dealers expect to lose a couple sales days. Others are enjoying sales bumps, as shoppers stock up on shovels and other winter gear – and snow day snacks.AIRLINES HUNKERING DOWN

Airline travelers are going nowhere fast. More than 6,500 flights in and out of the Northeast were canceled Monday and Tuesday.

Most major U.S. carriers said they would allow passengers ticketed to, from or through the Northeast on Monday or Tuesday to change their plans without getting hit by a reservation-change fee, typically $200.RETAILERS CLEAN UP

Home Depot said it’s seeing high demand for shovels, salt, snow throwers and other suppliers throughout the mid-Atlantic up through New England. Stephen Holmes, a Home Depot spokesman, said the company’s supply chain and merchandising teams are working closely to replenish any stores that run out of items. Around 2:30 p.m., Holmes said it was too early to tell if the storm would have any impact on store hours.

At Fairway supermarket in New York, Geeta Bhegat cut her shopping short “because everybody is fighting,” she said. “But it’s not the end of the world; everybody is going to get their food.”

Jon Hurst, president of the Retailers Association of Massachusetts, said the storm was hitting at a relatively slow time for the retail sector and he did not expect stores to experience huge losses.

“We have certainly had past storms during the holiday season or right around Valentine’s Day which had more lost sales than will be likely seen this week,” Hurst said.

Some retailers, particularly food and hardware stores, will benefit in the run-up to the storm, he added.AUTO SALES FREEZE

The storm is hitting at an inopportune time for car dealers in the Northeast as they try to close out January with strong sales numbers. But Dwight McGuirk, president of Smith Cairns Subaru in Yonkers, New York, says he’s not worried.

He expects to lose a couple of days of sales on Tuesday and maybe Wednesday, but says customers will return as soon as the weather breaks. “If they don’t buy it tomorrow, they’ll buy it next week,” he said Monday.

Because the storm affects such a highly populated area, it’s likely to cut into U.S. sales in January a bit, said Jeff Schuster, senior vice president forecasting for LMC Automotive, an industry consulting firm. But unlike last year, when much of the country was in a prolonged deep freeze, Schuster said the impact should be temporary.

“Assuming that this isn’t just one of many to come, this particular blizzard, the impact should be minimal,” he said.PREPARE TO SHELL OUT FOR A RIDE

Want a ride home from car service Uber during the major snowstorm descending on the Northeast on Monday? Expect to pay more than the usual fare.

Still, after taking heat for raising prices during past storms, Uber has capped how much prices can rise in U.S. cities during disasters or emergencies.

In New York City, surge pricing will be capped at 2.8 times – nearly triple – the normal fare. The San Francisco company is also planning to donate proceeds to the American Red Cross. That’s part of its nationwide policy during disasters and emergencies after criticism when prices surged during Superstorm Sandy in 2012.

Banks in the path of the storm closed early, and many planned to keep doors shut on Tuesday.

Wells Fargo, Citi and J.P.Morgan Chase closed all of their branches in New York and Connecticut at 3 p.m. or 4 p.m, an hour or more earlier than normal. Most in New Jersey were closed, too. The banks have more than 1,500 branches in the three states.

Wells Fargo and Chase plan to keep all branches in the three states closed Tuesday. As of 4:15 p.m., Citi planned to open all its branches in those states on Tuesday, but a spokesman noted that could change.

The banks said ATMs and websites were working.ORDERING IN SNOW DAY SNACKS

FreshDirect, a grocery delivery service in the Northeast, is making “every effort” to ensure customers get their orders on Monday, including trying to reschedule deliveries earlier in the day, said Fresh Direct spokeswoman Amanda Vogel. But all Tuesday orders were canceled. The last time Fresh Direct canceled all orders for a day was during a snowstorm in February of last year, she said.

In the days leading up the storm, Vogel said the company saw in uptick in items indicating people were preparing for “movie day,” such as microwavable popcorn and chocolate chip cookies.

Amazon.com’s Prime Now app, which promises one-hour delivery for members of the loyalty program in New York, has a winter preparedness section that includes batteries, chamomile tea and canned soup. The app warned of delays Monday afternoon and then said all delivery slots for Monday and Tuesday were full.A BOON FOR SALT SELLERS

Bulldog Cleaning Services of Jenkintown, Pennsylvania, is hoping to sell some road salt.

Bulldog does steady year-round business in janitorial work and cleaning offices, carpets and upholstery, so the owner, Zachary Konell, said he considers the winter salt and snow removal business as a bonus.

Konell buys two or three tons of salt at the start of each winter at about $120 per ton so he can avoid paying higher prices during an emergency.

There hasn’t been much snow in his area this winter. That could change in the next couple of days.

“I’m grateful for the snow this time of year and I’m looking forward to getting rid of a lot of this salt,” said Konell. But he isn’t expecting the full force of the storm nearby. And he doesn’t anticipate raising prices this week.SHOW STOPPER

Broadway theaters are shuttering as a blizzard blasts Times Square.

The Broadway League said all 27 plays and musicals will be closed on Monday, a traditionally quiet night with only a few shows available. No firm decision about Tuesday has been made.

The last time Broadway took a big hit from the weather it was Superstorm Sandy in 2012. That storm darkened Broadway for four days and cost more than $8.5 million in lost revenue.POWER PUSH

PowerSecure International Inc. provides large backup power systems to businesses that have a critical need for it, like hospitals, grocery stores or data centers. Big storms can work as a catalyst to push an executive who was thinking about buying a backup system into making the purchase.

“(Storms) are positive for our business, but they tend to be positive 12 to 24 months forward,” said PowerSecure spokesman John Bluth, noting that the company saw a gain from Superstorm Sandy.

PowerSecure has utility crews standing by to help restore power if needed. Its workers also have been checking in with customers to top off fuel in their backup systems and make sure they are ready if needed.STOCK EXCHANGES: OPEN FOR BUSINESS

But the major stock exchanges expect to remain open for trading, with normal hours, Monday and Tuesday.

With most trading handled electronically instead of between barking traders, it’s rare for the exchanges to pause for weather. The New York Stock Exchange suspended trading for two days after Superstorm Sandy hit in October 2012.