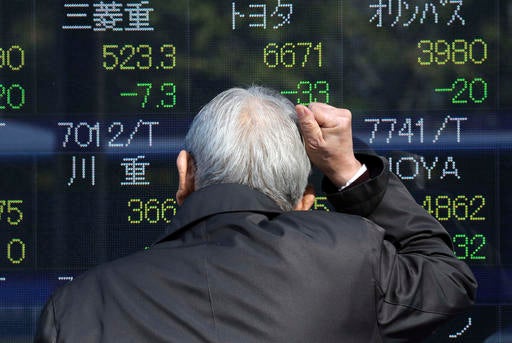 THE QUOTE: “A rude awakening was seen for markets at the start of the week as President Donald Trump’s latest policy on immigration tipped the market into risk-off mode,” said Jingyi Pan, a market strategist at IG in Singapore.

JAPAN: Japan’s central bank left its lax monetary policy unchanged in its first board meeting of the year, but upgraded its growth estimates, citing signs of recovery in manufacturing. The most recent data, for December, paint a mixed picture, with stronger factory output but weaker retail sales and household spending.

ENERGY: U.S. crude oil slid 21 cents to $52.42 a barrel in electronic trading on the New York Mercantile Exchange. It lost 54 cents Monday to $52.63 a barrel. Brent crude, the benchmark for international oil prices, fell 9 cents to $55.23 a barrel in London.

For more headlines from Jane King at the Nasdaq, watch Daybreak Monday through Friday.