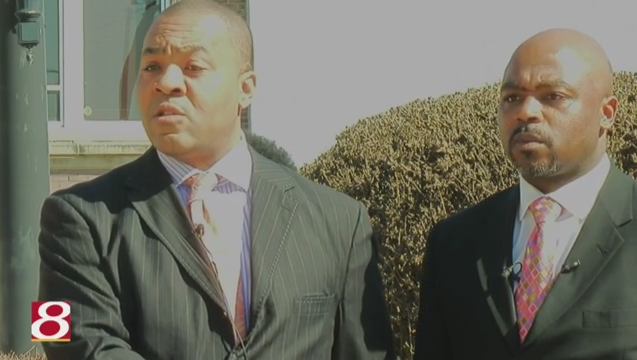 MARION, Ind. (WISH) — The Assistant Fire Chief in Marion has agreed to a demotion after accusations of racist behavior toward a firefighter.

Firefighter Mikel Neal and his attorney held a news conference Wednesday morning to address the incident.

Neal told the media and a crowd of supporters that during a training exercise about ropes and knots, Assistant Chief Rick Backs tied his rope into a noose and tossed it at him.

“I catch it with my right hand. I was instantly upset, disgust, angry. But more, I was stunned,” said Neal.

Neal has worked for the department for 16 years. He’s worked with Backs for more than five.

“It was just a working relationship. We never really hung out or anything. Just work. That’s it,” said Neal.

Fire Chief Paul David says Backs hasn’t had any problems in the more than 20 years he’s served at the department.  When asked if Backs was a racist, Chief David said “No. I don’t believe he is. He has no racial motivation when he had talked with us.”

“I maintain that my actions were not racially motivated, it wasn’t a threat, or a joke, but an honest lapse in judgment, and was not directed at any particular person.”

“If he doesn’t have the brain power to understand a noose in Marion, Indiana could be a joke, this is not a joke,” said Madison.

Marion is the last known place where a public lynching took place back in 1930. Pearl Bassett is a Neal family friend. She was also at the conference and said she had close connections to the lynching.

“I came up with those boys that was lynched. I knew them very well. The families and all. It’s been a shock to Marion. When people bring things like this, it hurts,” said Bassett.

It’s a hurt that Neal and his attorney plan to stop.

“I can’t imagine a place where that is acceptable and tolerable in 2015,” said Madison.

Both Backs and Neal plan to go back to work at the Marion Fire Department. They will be at different stations, however.

As for what’s next for Neal?

He wouldn’t comment on whether or not a lawsuit is in the works, but did say he would like to have a community conversation that involves the fire department.