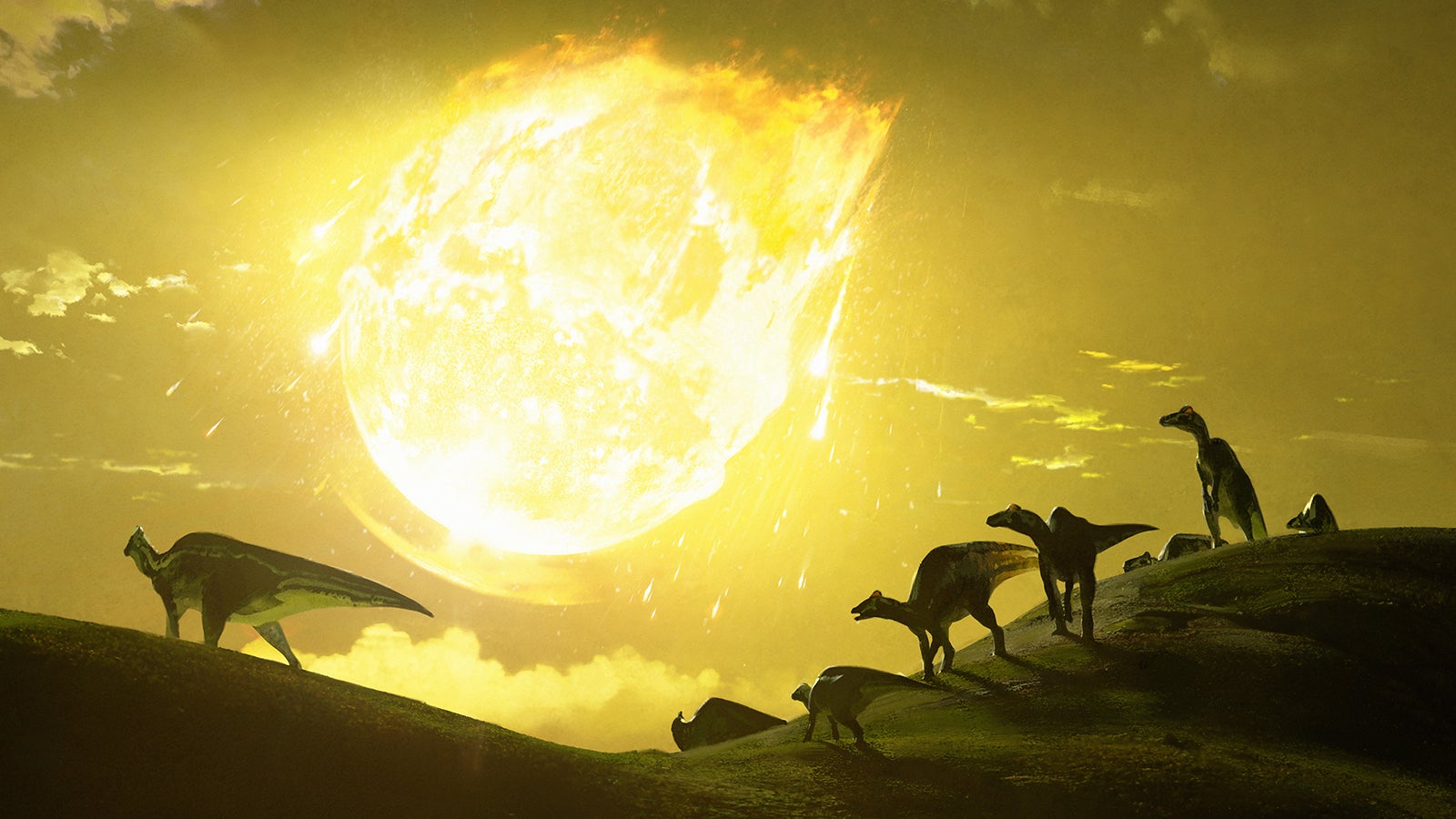 (CNN) — The city-size asteroid that hit Earth 66 million years ago and doomed the dinosaurs to extinction came from the northeast at a steep angle, maximizing the amount of climate-changing gases unleashed into the atmosphere, a new study has found.

That the 200-kilometer-wide Chicxulub crater in present-day Mexico was formed when the asteroid struck, ultimately killing off three-quarters of life on the planet, is a fact most scientists agree on. But the trajectory and direction of that impact is still a topic of debate.

In a new study, an international team of researchers said their 3D simulations showed that the asteroid hit at an angle of 40 to 60 degrees — what Gareth Collins, a professor of planetary science at Imperial College London’s department of earth science and engineering, described as a worst-case scenario for the dinosaurs.

“The asteroid strike unleashed an incredible amount of climate-changing gases into the atmosphere, triggering a chain of events that led to the extinction of the dinosaurs. This was likely worsened by the fact that it struck at one of the deadliest possible angles,” said Collins, the lead author of the study that published Tuesday in the journal Nature Communications, in a statement.

“We know that this was among the worst-case scenarios for the lethality on impact, because it put more hazardous debris into the upper atmosphere and scattered it everywhere — the very thing that led to a nuclear winter,” he added.

Such a strike likely unleashed billions of tons of sulfur and other gases into the atmosphere, blocking the sun and leading to a dramatic cooling of the Earth’s climate.

Older studies had found that the asteroid hit at a shallower angle and came from the southeast, Collins said.

“This was based on a different interpretation of the geophysical data, which our work overturns, and observations at the time that suggested that the ejecta from the crater was asymmetric, with more ejecta in North America (to the northwest) than elsewhere,” he explained via email, referring to the material that was forced out as a result of the impact.

“More recent observations have shown that the ejecta distribution is more-or-less symmetric.”

The team of researchers from Imperial College London, the University of Freiburg in Germany and The University of Texas at Austin examined the shape and structure of the crater and rocks extracted by drilling down into the crater, which contained evidence of the extreme forces generated by the impact.

“Despite being buried beneath nearly a kilometer of sedimentary rocks, it is remarkable that geophysical data reveals so much about the crater structure — enough to describe the direction and angle of the impact,” said Auriol Rae, a postdoctoral researcher at the University of Freiburg and a coauthor of the study.

This information and other data were used to build a model that simulated how the Chicxulub crater was formed, determining the direction the asteroid came from and the angle. The team considered four different angles — 90, 60, 45 and 30 degrees.

The authors said that they regarded 60 degrees as the most likely angle because of the relationship between three points in the crater — its center, a ring of mountain made of heavily fractured rock inside the crater rim and the center of dense, uplifted mantle rocks some 30 kilometers beneath the crater.

At Chicxulub crater, these features are aligned in a southwest-northeast direction, the study said, and the team’s 3D simulations at an angle of 60 degrees reproduced these observations almost exactly.

The authors said that that angle of impact would have produced more climate-changing gases like sulfur and carbon dioxide than either a very shallow or near-vertical impact.