At Belmont and beyond, fans celebrate American Pharoah’s win 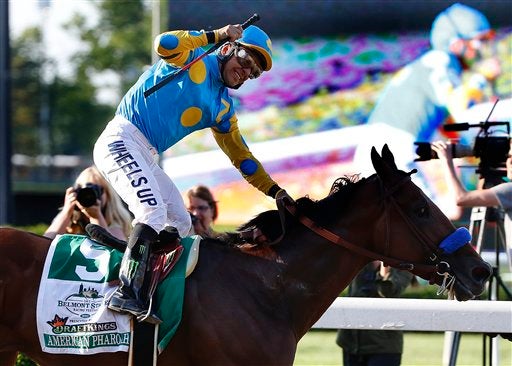 NEW YORK (AP) – From Belmont Park to Fenway Park and far beyond, it was a party that horse racing had been waiting 37 years to throw.PHOTOS |Images from his big win

All over, there were cheers as American Pharoah galloped away Saturday with the Triple Crown fans had waited almost four decades to witness again.

“I feel like I was honestly a part of history today,” said New York City resident Zach Witkoff, 22, who last year left the Belmont Stakes dejected after California Chrome’s failed bid at one of sport’s most elusive feats. “I think all the fans felt that way.”

In Boston, the Red Sox played a highlight of the race on the center-field scoreboard during a pitching change in the eighth inning, accompanied by the Lone Ranger’s theme song – “The William Tell Overture.” The crowd at Fenway roared when the finish was shown.

In Los Angeles, the race was shown on the video board at Dodger Stadium while the St. Louis Cardinals warmed up.

At Yankee Stadium in the Bronx, a short ride from Belmont over the Throgs Neck Bridge, Kool and the Gang’s “Celebration” blared over the sound system when American Pharoah’s romp was shown.

At the track, many of the 90,000 in attendance hugged one another and slapped hands after the bay colt won. Some held up phones in the air, trying to capture the moment.

As American Pharoah rounded the curve into the final stretch, their roar grew and drinks spilled and splashed as he approached the finish line and finally won by 5 ½ lengths.

“I’m overwhelmed right now,” said Kirk Krininger of New Albany, Indiana, after the race. “I’ve been to the Belmont several times, been waiting for this and just can’t even believe it. Just an exhilarating experience.”