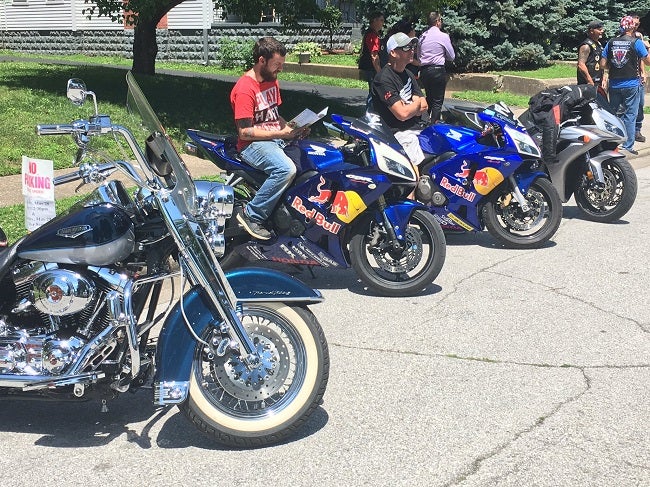 OWENSBORO, Kentucky (WEHT/WTVW) — While Nicky Hayden did not serve in the armed forces, he was an ambassador for his native home.

And bikes filled the streets Sunday in his name.

The Moto-GP champion died in a hospital on May 22, five days after he was hit by a car while training on his bicycle. Hayden was 35.

People came to St. Stephen Cathedral from across the tri-state area, and across the country. Family, friends and fans paid their respects, and took part in one last ride in honor of Nicky Hayden.

From near and far, they lined Locust Street to say goodbye to the “Kentucky Kid.”

“It’s overwhelming. We walked from one end to the other, it’s packed,” said Sheila Kessinger, of Owensboro.

“Anybody you talk to, there’s never a bad word. He was one of those guys who was gracious in victory and defeat, which is rare,” said David Vaughn of Chicago.

Some have known him since he was a kid.

“Just as a kid that I knew that used to ride around Panther, Kentucky on a dirt bike, and my boys rode with him before he graduated in to superstardom,” recalled Tommy Hunt of Lewisport.

Thousands of bikers rode in the funeral procession around the city to Hayden’s final resting place.

“Pretty sure that Earl is really going to enjoy it because the more chaos, I was told, the more he would enjoy it,” said Mike McFadden, who organized the funeral procession. For him, it’s a chance for the Haydens to start the healing process.

“That’s what we’re here for, start the beginning process of helping the Haydens heal, and helping everybody else heal,” McFadden says. “I think it’s a good way to be able to do that.”

As the procession went down streets, and the sounds of motorcycles faded, the memories of Nicky Hayden keep going in those who knew him.

“He was the Owensboro boy, the Kentucky Kid,” says Hunt.

Hayden is survived by his parents, fiancee, brothers and sisters, and numerous other relatives.

Here at Nicky Hayden’s funeral in O’Boro where hundreds of motorcycles are lined up on Locust St. As many as 3,000 could be here for this. pic.twitter.com/I8ikooIcRB– Mike Pickett (@mikepickett257) May 29, 2017

And the bikers are starting to leave Locust St., turning into 4th St., then down to Frederica St. pic.twitter.com/qUGqoLRQVG– Mike Pickett (@mikepickett257) May 29, 2017