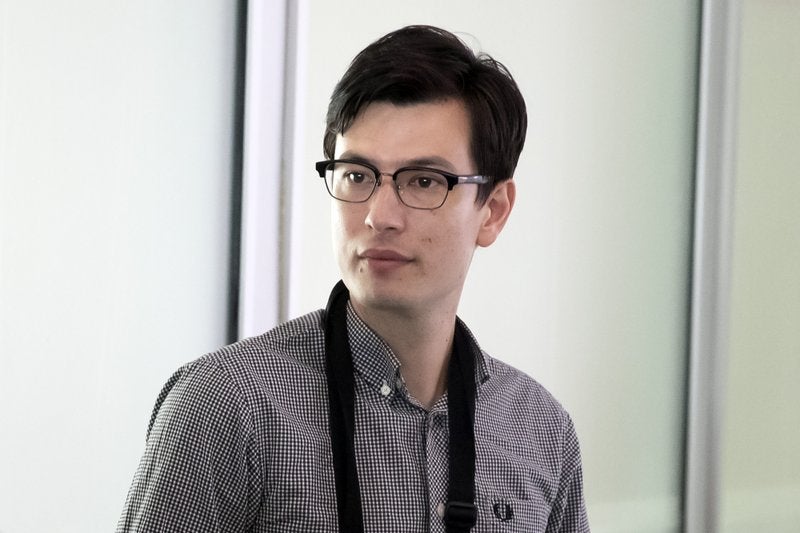 Australian student Alek Sigley arrives at Beijing Capital International Airport in Beijing, Thursday, July 4, 2019. Sigley was released after a week in detention in North Korea described his condition to reporters in Beijing on Thursday as "very good," without saying what happened. (AP Photo/Mark Schiefelbein)
by:
Posted: Jul 4, 2019 / 10:31 AM EST / Updated: Jul 4, 2019 / 10:49 AM EST

BEIJING (AP) — An Australian student released after a week in detention in North Korea described his condition to reporters in Beijing on Thursday as “very good,” without saying what happened.

Australian Prime Minister Scott Morrison announced to Parliament that Alek Sigley, 29, had been released hours earlier following intervention from Swedish diplomats on Wednesday, and had been taken to the Australian Embassy in Beijing.

Sigley looked relaxed and gave a peace sign when he arrived at Beijing’s airport. He did not respond to reporters’ questions about what had happened in Pyongyang.

His father, Gary Sigley, a professor of Asian studies at the University of Western Australia, said his son would soon be reunited with his Japanese wife Yuka Morinaga in Tokyo.

Later Thursday, Sigley entered the departure area at Beijing airport, apparently on his way to Tokyo.

“He’s fine. He’s in very good spirits. He’s been treated well,” his father told reporters in his hometown of Perth.

Sigley’s friend and fellow student of North Korea, University of Technology Sydney academic Bronwen Dalton, said she had spoken to Sigley’s wife, who was thrilled by the news.

“We were jumping up and down and we love Sweden,” Dalton said.

“He’s a fine, young, emerging Asian scholar, he is very applied to his studies. I really doubted whether he did actually anything wrong by the regime,” Dalton added.

Swedish diplomats had raised concerns about Sigley with North Korean authorities in Pyongyang, where Australia does not have an embassy.

“Alek is safe and well. Swedish authorities advised the Australian government that they met with senior officials from the DPRK yesterday and raised the issue of Alek’s disappearance on Australia’s behalf,” Morrison said, using the official acronym for North Korea.

“This outcome demonstrates the value of discrete behind-the-scenes work of officials in resolving complex and sensitive consular cases in close partnership with other governments,” Morrison said.

In an interview with Swedish public radio Thursday, Swedish Foreign Minister Margot Wallstrom said she had been in contact with Australia and Sweden’s special envoy to North Korea, Kent Harstedt. She said Sweden had “raised the issue of this case at highest level” in North Korea and the release happened during Harstedt’s visit to Pyongyang.

“Happy for the release of Australian citizen Alek Sigley today! Sweden has done its utmost to work for Mr Sigley under our bilateral agreement with Australia. Relieved that the situation was resolved,” Wallstrom tweeted. She also welcomed “Korean authorities’ rapid action in connection with the visit of Sweden’s special envoy for the Korean Peninsula,” according to the Swedish Foreign Ministry.

North Korea’s official Korean Central News Agency said the Swedish delegation led by Harstedt headed back home on Thursday after a four-day visit. It said the Swedes visited a stamp museum and shoe factory during their stay in North Korea, but made no mention of Sigley.

The Pyongyang university student and tour guide had been out of contact with family and friends in Japan and Australia since Tuesday last week. He had been active on social media about his experiences in North Korea and had boasted about the extraordinary freedom he had been allowed as one of the few foreign students living in Pyongyang.

Morrison’s announcement was the first confirmation that he had been detained.

North Korea has been accused in the past of detaining Westerners and using them as political pawns to gain concessions. Australia advises people to reconsider their need to travel to North Korea and warns that foreigners have been subject to arbitrary arrests and long detentions.

Leonid Petrov, an Australian National University expert on North Korea and a friend of Sigley, last week speculated that Sigley had been “deliberately cut off from means of communications” temporarily because Trump was in the region.

Petrov said on Thursday that he had not been able to contact Sigley since he had been freed, but still suspected his disappearance was linked to Trump’s meeting with North Korean leader Kim Jong Un on Sunday.

“It was a time of sensitivity in North Korea after the visit of (Chinese President Xi Jinping) and before the visit by Donald Trump,” Petrov said.

“I expected this to happen a couple of days earlier, but it was a good thing to see the Swedish government delegation arrive on Monday just after the summit. It was the right time to be there,” Petrov added.