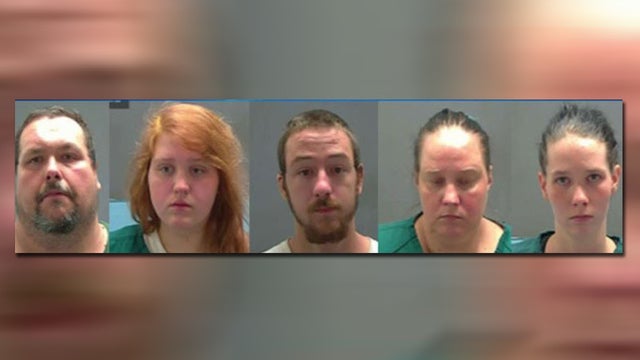 NEW ORLEANS (AP) — Five Louisiana residents now face federal charges for allegedly imprisoning and abusing an autistic woman, two years after they were arrested on state charges in the case.

Prosecutors allege a litany of horrors against the 22-year-old victim in an indictment made public Thursday evening. They say the woman was kept in a cage outside the Tangipahoa Parish home where the suspects lived. Prosecutors said she was coerced into manual labor such as bathroom and kitchen cleaning and subjected to psychological and physical abuses: threats of harm or death if she didn’t obey, beatings, being burned with a cigarette lighter and having human waste from a septic tank dumped on her.

One of the suspects is charged with shooting her with a BB gun. At one point, according to charging documents, she vomited after being forced to eat the cremation ashes of her late mother as the defendants laughed.

Terry Knope also faces a hate crime count, in which prosecutors say the injuries he caused the victim were motivated by her disability. He also is charged with theft of government funds — more than $8,700 in Social Security benefits meant for the victim.

Another of Raylaine Knope’s daughters, Bridget Lambert, was charged separately in a bill of information with forced labor conspiracy. Prosecutors say the charge carries a maximum five-year sentence.

All five are in custody, according to court documents. Defense attorneys declined to comment or didn’t immediately respond Friday.

Tangipahoa Parish Sheriff’s Office deputies made the initial arrests in 2016 after the woman was found wandering around the back yard of the residence. At the time, Sheriff Daniel Edward said the woman appeared malnourished and was covered with insect bites.

Prosecutors said the victim was a relative of Raylaine Knope. The indictment said the victim and her mother had lived with the defendants until the mother’s death in 2015.

When the arrests were made, the victim, identified in documents only by her initials, was placed in the custody of the state Department of Health and Hospitals protective services.