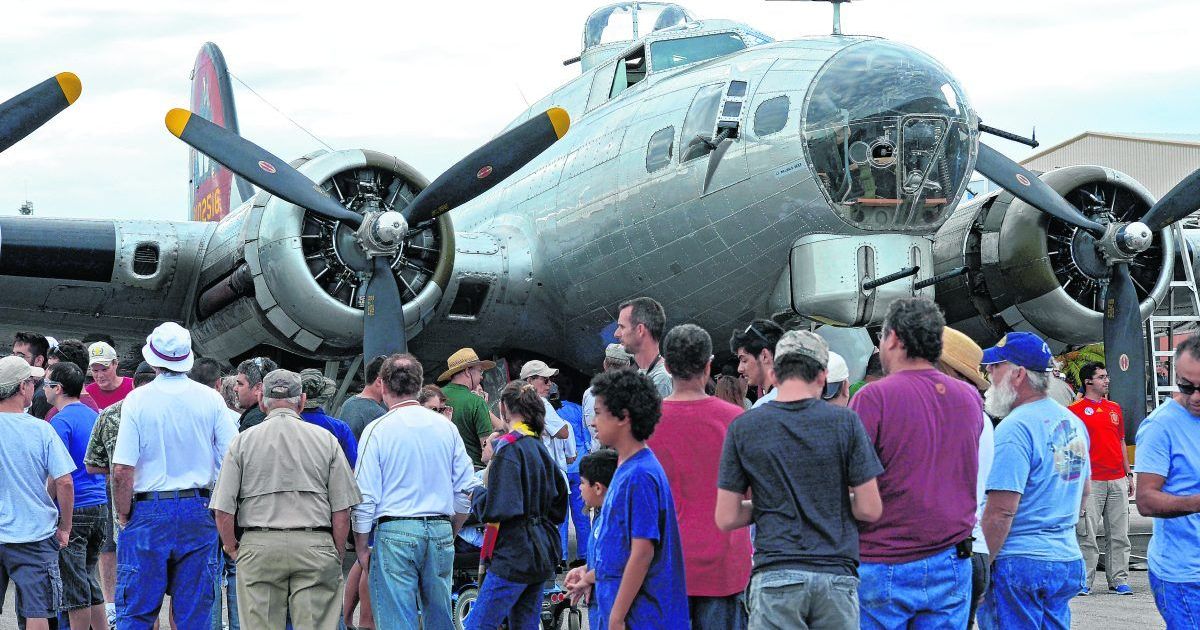 GREENWOOD, Ind. (DAILY JOURNAL/WISH) – A fully restored B-17 bomber will come to the skies of Johnson County over the weekend.

The Aluminum Overcast, built at the end of World War II, will take up residence at the Indy South Greenwood Airport, where people can take photos, meet the pilots who fly the historic airplane and even take a ride in the spacious bomber.

The event takes place Friday through Sunday and runs from 10 a.m. to 5 p.m. each day.

Organizers of the event relish the opportunity to teach generations of flight fans about the importance of the B-17. More impactful is to take World War II veterans who served on the planes up for another ride.

“It’s a thrill to ride on it,” Roger Tomey, president of the local chapter of the Experimental Aricraft Association said. “There’s a lot of history here in this aircraft.”

Individuals can purchase a ticket to ride in the bomber. Flights cost $435 for EAA members and $475 for non-members. The flights will run from 10 a.m. to 1 p.m., weather permitting.

Tours will be given showing off the unique aspects of the plane such as the different gun turrets and bomber sights. Tours will be held from 2 to 5 p.m each day. Tickets are $10 for individuals and $20 for families. Veterans and active military are free.

Organizers will also be on hand to give more information about the programs the Experimental Aircraft Association does locally, Tomey said.

The B-17 tour is organized by the Experimental Aircraft Association, an organization focused on growing participation in all kinds of aviation, from antiques to warbirds to unique aircraft such as aerobatic airplanes and ultralights.

But some of the most popular events are its aircraft tours, said Sean Elliott, director of flight operations for the Experimental Aircraft Association.

“The B-17 program has been in existence since 1994, and it’s our No. 1 outreach for the organization. We take this airplane from coast to coast, and have tour stop hosts, which are often our chapters, that are very excited about seeing the airplane,” Elliott said. “Then we bring a whole lot of people out to the airport to get a very positive view of what general aviation is all about and why flight is so magical.”

Partnering with airports around the country, the association brings B-17s as well as a B-25 and the Ford Tri-Motor out for public events and rides.

Greenwood’s airport has hosted both tours in the past. The events are always popular with local aviation fans, Tomey said.

“Each year, we call and see if we can’t get on the schedule for Greenwood. We work that into our educational programs with the local schools,” Tomey said. “They had a record number of people come out of Greenwood last time.”

The B-17 bomber has a unique place in American history. Known as the Flying Fortress, it was used heavily in missions deep behind enemy territory in Europe during World War II.

Between 1935 and May 1945, 12,732 B-17s were manufactured. Today, fewer than 100 of the original airframes still exist. Only 15 are able to fly, according to the Experimental Aircraft Association.

One of the most moving aspects of the tours are when veterans who flew in a B-17 come out to see it.

Tomey recalled last year, when a man in his 90s came up with his walker to simply look at the airplane. Tomey started talking to him, and asked if he wanted a ride on the plane.

The veteran responded that he had been a ball turret gunner, hanging underneath the airplane in a cramped space.

“He said he’d had enough of these. He didn’t want to get on; he just wanted to look at it one last time,” Tomey said.