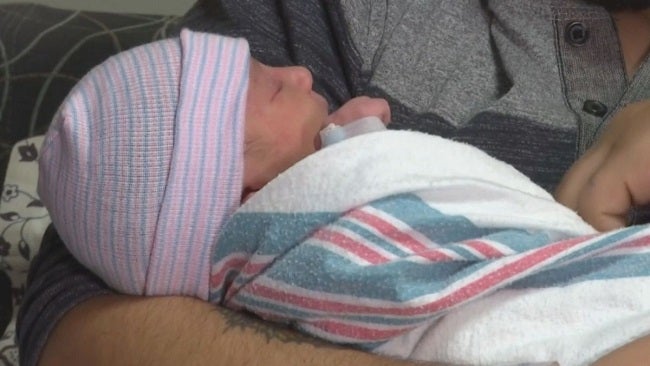 CHARLESTON, S.C. (WCBD) — Multiple babies were born across the Lowcountry Monday, some of the first babies of 2018. One little girl has a birthday for the books.

Her parents said the whole experience seemed like a scene out of a movie.

Little Anastasia came into the world in a whirlwind. Her parents live in St. George, but planned to deliver the baby at MUSC in downtown Charleston. The baby decided to come about three weeks early, so her parents hit the gas on the interstate to speed up the hour long drive to the hospital.

The baby’s mother, Tiffani Von Glahn, says, “He was going about 90-95 and a police officer came up behind us to pull us over. And he was like, ‘Do you want me to stop?’ And I was like, ‘No don’t you stop’, because I felt her coming.”

Baby Anastasia’s parents were worried about not making it to the hospital in time because there was a chance of complications with the delivery.

Von Glahn says, “I was told she was a high risk pregnancy and the way she was sitting at the time, she would’ve gotten stuck and I would’ve had to have a C-section. So I was thinking there was no way I could have her naturally.”

Because the car was not pulling over for law enforcement, they switched gears thinking it was a car chase.

Von Glahn says, “I look back and there’s like 20 police cars, and they had the exits blocked off and everything. Eventually it got to where they had to box us in to stop us.”

They stopped the car in the middle of the interstate, at the Cosgrove Avenue exit. The cops sprang into action.

Von Glahn says, “They ended up putting him in handcuffs, just for safety reasons, because they were saying there are people out there that will fake having a pregnant wife.”

But baby Anastasia couldn’t wait any longer. With the help of police, she was born right there in the center of the interstate.

The baby’s father, Carl Alewine, says, “I’m sitting there, watching her born on the hood of the car, fireworks going off in the background because it’s New Year’s, and then they let me out of handcuffs, and the cops started clapping and congratulating us.”

The parents say once law enforcement realized what was happening, they handled it flawlessly.

Alewine says, “It happened so fast and the guy that delivered her was just there.”

It’s still hard to believe how Anastasia was born into the world. Her parents say the first hour of 2018 had enough excitement to last the rest of the year.

Alewine says, “When you’re going to the hospital to have a kid, you imagine high speed, cops around you, but yeah that happened”.

Even though there were concerns about complications with this pregnancy, both mom and baby are doing great. The infant was born at a healthy 6 pounds 2 ounces.