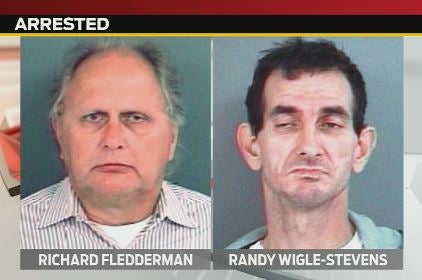 BATESVILLE, Ind. (WISH) – The mayor of Batesville is in hiding after being arrested for hiring a prostitute.

Mayor Richard Fledderman was arrested yesterday for hiring a male prostitute. He notified the police after he said the man threatened to go public with their encounter.

State police arrested Randy Wigle-Stevens of Indianapolis for prostitution, and for failing to disclose that he is HIV-positive.

“Its a tough day for Batesville,” said Batesvill Councilman Gene Lambert. “Its a shock.”

“I really don’t know what leads people to jeopardize everything they have in their life,” said Gary Steinmetz while walking through the city of less than 7,000 people.

Court documents show that back in June, Fledderman hired Wigle-Stevens to perform sex acts. He paid him $170. Wigle-Stevens then threatened to go public after learning he was mayor.

“As many problems as there are in this town right now and you’re supposed to be the person that’s in charge of solving those issues,” said Josh Gutzwiller of Batesville. “Its just ridiculous, ridiculous.”

No one answered the door Wednesday at Fledderman’s home.

But just as the people on the streets are talking, Fledderman’s colleagues in city hall are discussing their next steps.

“City leaders and employees will continue to work hard to make our community the wonderful place that it is,” said Councilman Lambert.

Republicans and Democrats on the council are looking at Fledderman’s record. He’s been mayor for 12 years, and before then was a councilman for eight years.

“I hope that everyone in the town realizes what the mayor’s done over his last 20 years as opposed to this possible indiscretion that happened in his private life,” said Councilman Fritsch.

“What people want to do on their own time? That’s their business, but prostitution in any form is disgusting,” said Gutzwiller.

“My question is why? I can’t understand that,” said Steinmetz.

An initial court appearance hasn’t been set yet for Mayor Fledderman. Wigle-Stevens was released Wednesday. His trial is set for February

The city council is handling the city’s business in the mayor’s absence.

Fledderman lost reelection in the primaries. His term is set to end in January.