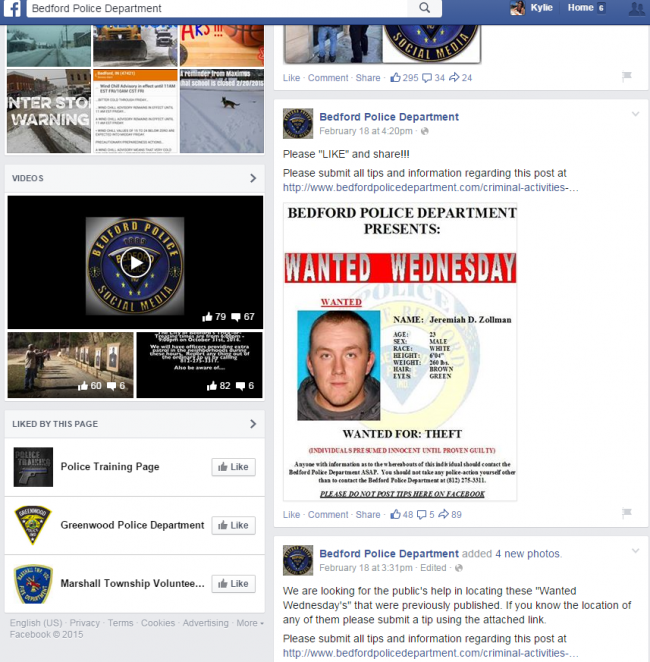 BEDFORD, Ind. (WISH) – Bedford police have launched a new social media campaign that could make people famous for all the wrong reasons.  It’s called “Wanted Wednesday.”  It’s a way for the department to use Facebook to catch bad guys.

Each Wednesday, BPD posts a mugshot of someone with an active warrant to its Facebook page.

Chief Dennis Parsley said he wanted to get the community involved in hopes of blurring that line between police and neighbors.  Because he says everyone wants the same thing, a safe place to call home.

The people who end up on the site are usually people who police need to find due to a failed court appearance or parole violation.

So far, Parsley says, it’s been a huge success.  Since September he says the community has helped them find 19 of 23 “Wanted Wednesday” fugitives.

“And we’ve gotten information on a couple.  We know one is in Florida, one is in Kentucky.  We’re not going to extradite, but at least we know where they’re at. We’ve received comments from friends and family, ‘if they come back to Bedford we’ll let you know.’  So, it’s involving the community in a very positive way,” said Parsley.

Parsley says the ball started rolling after a few young officers wanted to make some sort of social media push for policing.  He said he was hesitant, but still sent an officer down to Texas for a social media police academy of sorts.

After the officer returned the department started looking at active warrants and counted about 2,300.  That’s when he said some detectives thought of the slogan “Wanted Wednesday.”

Parsley said there’s been a little bit of push-back, but overall, his biggest surprise is how quickly this was accepted by his community.

Back in October they actually posted where sex offenders lived in local neighborhoods during Halloween festivities.  They’ve also posted surveillance photos to catch hit and run drivers and thieves.  Those methods are similar to what many departments across the country have been doing in recent years.