Behind the scenes look at TSA security operations 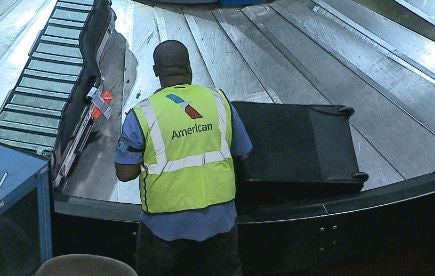 INDIANAPOLIS (WISH) – Learning from the past, security at Indianapolis International Airport has in place a multi-million dollar bag screening process.

“Prior to 9/11 they weren’t screening checked luggage,” said Aaron Batt, the state’s Federal Security Director. “After 9/11 there was an immediate need to screen checked luggage to ensure explosives weren’t being placed in those.”

The TSA doesn’t normally allow the public to screen its security, but for the first time Monday, cameras were allowed in.

An average of 20,000 people go through the airport every day. Most people hand their bags over at the ticket counter, and never see them again until they land.

“I have absolutely no idea (what happens to the luggage),” said traveler Donna Simerly, as she went through security.

Many of the bags go through miles of conveyor belts underneath the airport.

“A typical day here is about 8,500 bags that are going through the system,” said Batt. “We’re able to track luggage from the time it’s at the ticket counter to the time it gets passed off to the airline at the baggage carousel.”

From when someone hands their bag over, the majority of the bags are screened and then carted to the appropriate flight. The TSA says many of them make it to the gate before the passengers do.

But if a bag sets off an alarm, it ends up in the airport’s Alarm Resolution Room.

“If it alarms it will then provide an image to our employee, who will then try to do some on-screen resolution and if they’re unsuccessful in that, they’ll bring it in here,” said Batt.

Firearms, hazardous materials, illegal items like drugs, and many over-sized packaged are often further screened by an agent.

“Sometimes if its too big, we have to check it, normally,” said Anisah McCurty, who works for the TSA.

Most airports have similar security measures. But IND was one of the few to open in the post-9/11 world, so everything on the main level is built around the security below.

“We were able to look at it from a ground-floor and take security in mind,” said Batt.

Officials say the benefit to travelers is a safer flight.

“I’m glad they are checked out like they are going through the security points here,” said JT Foley as he went through security.

IND has nine advanced screening machines, each of them costing $1 million.

If a piece of luggage is flagged, and there’s a security concern, Batt says most times TSA will contact the airline, who will then get in contact with the passenger while he or she is in the departure city.

But if its an illegal item, often times the passenger is met by law enforcement at the gate.

Inside INdiana Business / 11 seconds ago