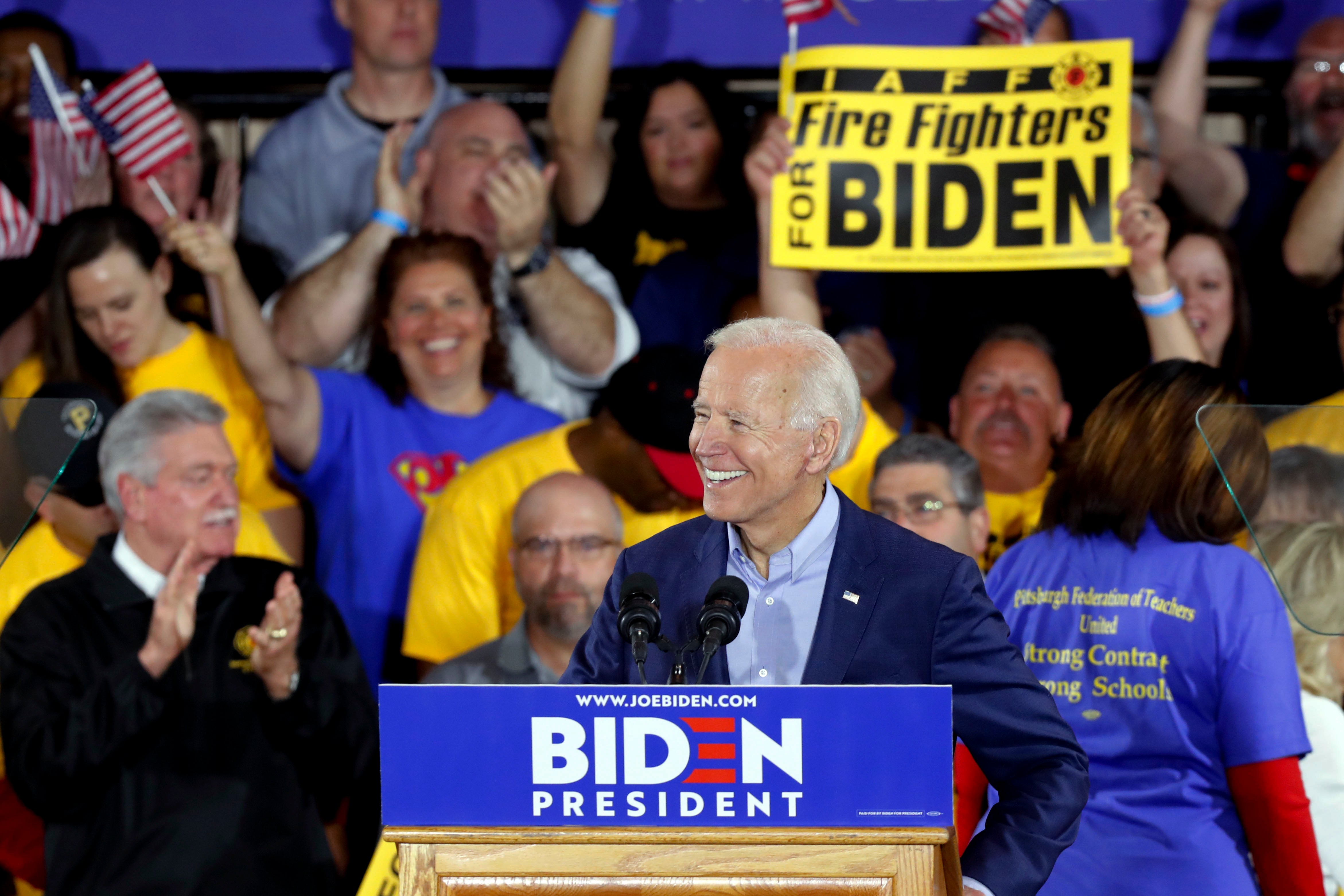 PITTSBURGH (AP) — Joe Biden accused President Donald Trump of abusing the powers of his office and ignoring everyone but his political base Monday in his first public rally as presidential candidate, arguing in the crucial battleground state of Pennsylvania that strengthening unions and promoting social and economic unity can restore Democrats to the White House.

The former vice president told hundreds of supporters and labor activists that Saturday’s deadly shooting at a California synagogue proves anew that the country is “in a fight for its soul.” But he spent more time criticizing Trump for his political behavior than for the president’s past comments concerning white supremacists, unlike Biden’s video formally kicking off his presidential campaign last week.

“There’s only one thing that stands in our way. It’s our broken political system that’s deliberately being undermined by our president to continue to abuse the power of the office,” Biden said.

He called Trump “the only president who has decided not to represent the whole country. He has his base. We need a president who works for all Americans.”

Earlier in the day, Biden received the endorsement of the International Association of Fire Fighters, and many in the crowd wore union T-shirts and carried signs supporting him. They repeatedly interrupted him with cries of “We want Joe!” and the candidate declared: “I make no apologies. I am a union man” to sustained applause.

Biden’s 40-minute speech swung from vows of union solidarity to broadsides against Trump, but lacked the sharp focus on the president that marked his campaign announcement video last week.

Instead, Biden on Monday returned to his familiar, folksy pitch to working class voters and avoided the sweeping, liberal policy proposals embraced by much of the rest of the crowded 2020 Democratic field.

Biden promoted incremental steps to shrink college costs and expand health care access, unlike some rivals who have called for free or debt-free college and universal, government-run health care, paid for with significant tax increases.

“We can do all this without punishing anybody,” Biden said,

Biden is scheduled to continue his introductory campaign steps in the premier caucus state of Iowa on Tuesday and Wednesday.

Trump, meanwhile, stepped up his criticism of Biden and boasted on Twitter about his own strong support among union members before Biden offered his pro-union message in Pittsburgh. Trump won Pennsylvania in surprising fashion in 2016, but Biden promised that his party would improve its standing by bringing the country together, not further dividing it.

The Teamsters Union ballroom in Pittsburgh is in a gritty Pittsburgh warehouse neighborhood that is undergoing an economic revival. The ballroom was full well before the event started, and the line to get in stretched down the sidewalk.

Biden now leads national polls of Democratic preference for the party’s 2020 primary, and in Iowa, which votes first in the contest. He also raised more than any of his roughly 20 rivals in the first 24 hours of their official candidacies. However, his age — 76 — could work against him as the party looks for new blood.

Biden’s event Monday had an economic theme and featured a different line of attack on Trump than he offered in the video kicking off his White House bid last week. The video began with the words, “Charlottesville, Virginia,” a fresh condemnation of what many feel is a stain on Trump’s presidency — his defense of white nationalists by suggesting “both sides” were to blame for the violence that claimed the life of an anti-racist demonstrator there in August 2017.

Trump on Friday defended his original answer, insisting that he wasn’t sticking up for white supremacists but those who were protesting the removal of a statue of Confederate General Robert E. Lee. Those protesters who descended on Charlottesville two summers ago did so chanting white nationalist slogans and carrying Confederate flags, however, and were joined by former Ku Klux Klan grand wizard David Duke.

Trump has often been slow to condemn violence perpetrated by white nationalists, and has long insisted that his words were misinterpreted and the media were twisting their meaning in unfavorable ways.

Privately, he has defended his initial response in the hours after the Charlottesville attack and was angry that aides persuaded him to do a more formal cleanup statement days later at the White House. After stewing about the media coverage of his comments, he spoke on the incident a third time, saying there were “very fine people” on both sides of the clash — which Biden referenced in his campaign kickoff video.

There was more bloodshed this weekend as a shooter killed one woman and injured the rabbi and two other people at the Chabad of Poway synagogue near San Diego. And Pittsburgh was the site of worse earlier shooting, in which 11 people were killed at the Tree of Life Synagogue October.

Trump has condemned both shooting incidents and has repeatedly griped that he is unfairly blamed for violence by white supremacists.