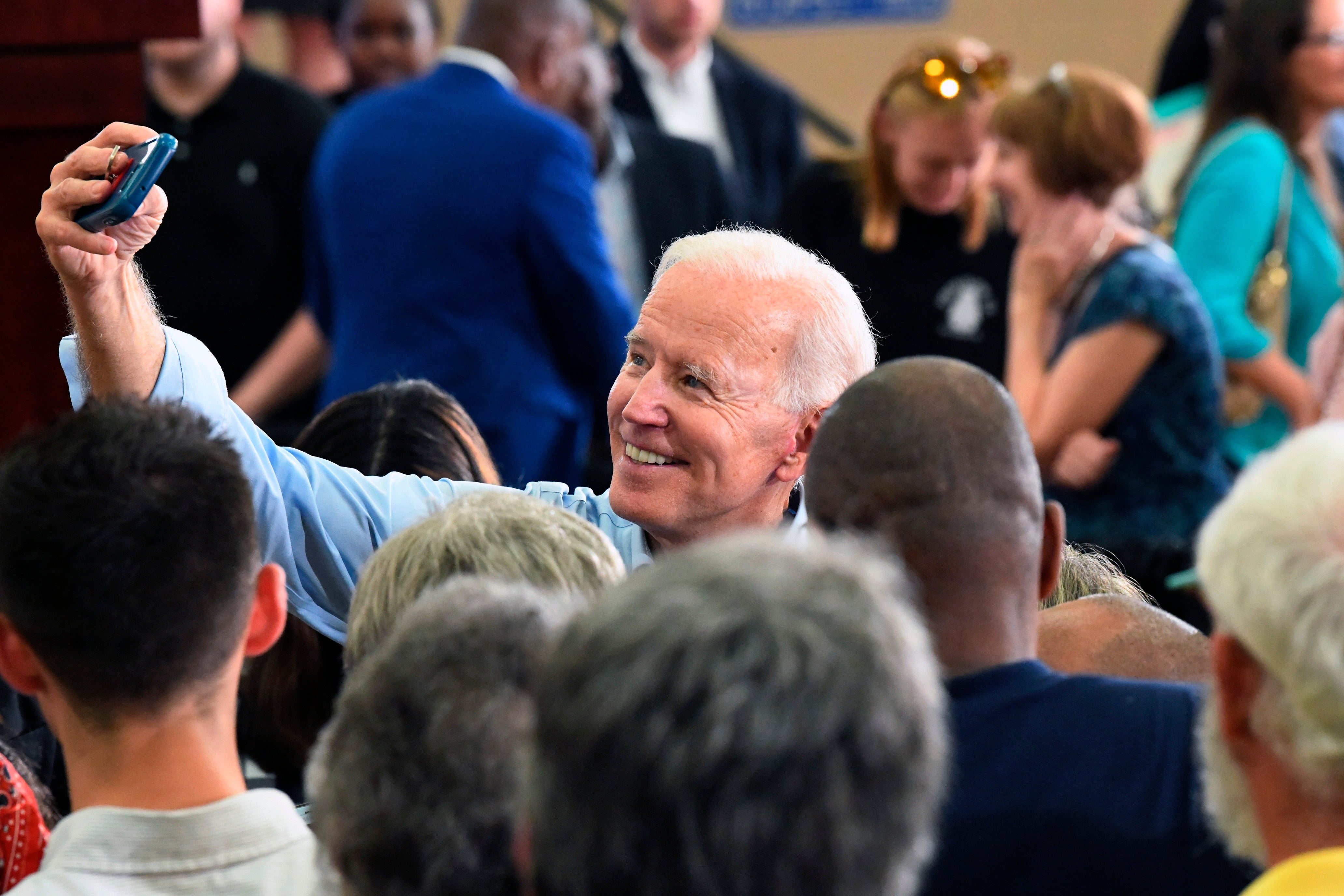 “You’ve got Jim Crow sneaking back in,” he said, referring to the era before the civil rights movement. “You know what happens when you have an equal right to vote? They lose.”

Biden centered much of his trip around the need to restore decency to the White House. “Your state motto is, ‘While I breathe, I hope,'” he said at the rally after continuing his full-throated denunciation of President Donald Trump. “It’s not a joke. We’re breathing, but God, we have got to have hope.”

He kept up that theme at a private evening fundraiser, telling several dozen donors that he expects a nasty race from President Donald Trump.

“This guy is going to go after me and family,” Biden said, recalling his grandchildren telling him before his announcement that they expect Trump and others to bring up family details including his son Hunter Biden’s divorce.

Biden said there “are so many nicknames I want to give this guy,” and he drew laughter when he joked that he’d “start with clown.” But he added that he doesn’t want to respond in kind.

“The only place he has any confidence is in the mud,” Biden said, because the president “doesn’t understand how to respond to issues.”

Biden said he will answer Trump “directly” in the future without name-calling. He recalled saying in 2016 that in high school he’d have “taken him behind the barn and beat the hell out of” Trump. “Guess what? I probably shouldn’t have done that,” Biden said. “The presidency is an office that requires dignity and reestablishing respect and standing.”

Biden will continue his trip Sunday by worshipping at a black church in Columbia.

He opened his latest run for president with explicit appeals to white, working-class voters across the Midwest, pledging his support for unions and promising to rebuild the middle class. Now, Biden is trying to gauge whether his message will resonate among more diverse electorates. Black voters accounted for a solid majority of Democratic presidential primary ballots in 2016.

Ahead of her husband’s afternoon remarks, Jill Biden emphasized the couple’s long ties to South Carolina, saying they came to the state to grieve after their son Beau died of cancer in 2015.

“Joe and I love South Carolina,” she said.

The former vice president credited the late South Carolina Sen. Fritz Hollings with persuading him not to abandon public office after Biden’s first wife and daughter were killed in an auto accident weeks after his election to the Senate in 1972. Last month, Biden traveled to Charleston to eulogize his longtime desk mate and friend .

He also noted his long friendship with Rep. Jim Clyburn, one of the top-ranking House Democrats. Clyburn, who typically doesn’t endorse a candidate before the South Carolina presidential primary, didn’t attend Biden’s events.

Sen. Bernie Sanders said one area in which he doesn’t fault President Donald Trump is his handling of North Korea, telling ABC’s “This Week” that Trump’s face-to-face meeting with North Korea’s Kim Jong Un “is the right thing to do.”

Sanders called North Korea “a threat to the planet” and said the U.S. has to do everything possible to have China and others in the region put pressure on the North and “make it clear that they cannot continue to act this way.”

South Korean officials said North Korea fired several unidentified short-range projectiles into the sea off its eastern coast on Saturday. The launch came amid a diplomatic breakdown between the U.S. and the North.

“This Week” released quotes from the interview in Iowa ahead of its broadcast Sunday.

Sanders told reporters in Iowa that if he were in the House, he would hold Attorney General William Barr in contempt for his refusal to appear at a congressional hearing on the special counsel’s Russia investigation and its report.

“We have a separation of powers, we don’t have an authoritarian government,” Sanders said.

Sen. Amy Klobuchar is knocking Trump as being too soft on Russian President Vladimir Putin during their recent phone call.

Trump and Putin on Friday had their first known call since the release of the special counsel’s report on Russian election meddling, and Trump said he didn’t warn the Russian president against interfering in future elections.

Klobuchar told reporters after an event in Des Moines, Iowa, that her message would be very different.

Klobuchar also said she was frustrated that congressional investigators haven’t been able to question special counsel Robert Mueller, whom she described as “the witness we need to go after Russia so that they don’t attack our elections again.”

Rep. Seth Moulton of Massachusetts is calling for more funding for the State Department.

Moulton said his own experience serving as a Marine in the Middle East showed the importance of diplomacy.

Former Texas Rep. Beto O’Rourke said in a commencement address that the legacies of “slavery, of segregation, of Jim Crow, of suppression” are “alive and well” today.

In remarks at historically black Paul Quinn College in Dallas, O’Rourke said “the work is far from over.” He has previously expressed support for creating a commission to study economic reparations for black Americans.

Sen. Elizabeth Warren warned the nation remains “at risk” for further foreign interference in its elections and that Trump “puts us squarely in trouble” with his public warmth toward Putin.

The Massachusetts Democrat told reporters in Iowa that the special counsel’s report “demonstrated conclusively that Russia attacked our electoral system with the purpose of helping Donald Trump.”

Trump tweeted on Saturday that his call with Putin the previous day was a sign of “tremendous potential for a good/great relationship with Russia.”