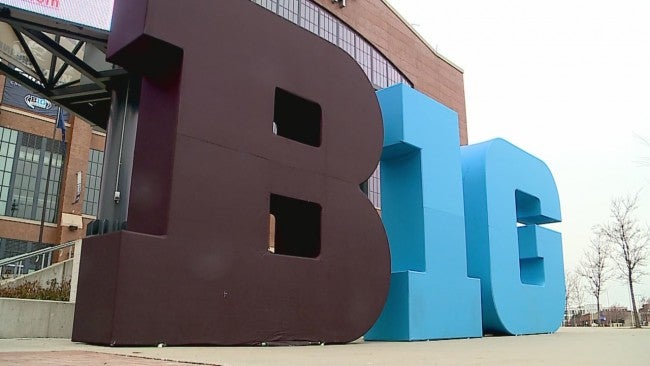 INDIANAPOLIS (WISH) – Crowds excited for the Big Ten Championship are being encouraged to be more vigilant this weekend.

Authorities don’t want people living in fear, but they want to make sure everyone is prepared for possible emergencies.

As visitors stroll through downtown ahead of the big game, there’s plenty happening on to keep them busy.

“Just the scenery, everything that’s going on I want to take it all in,” said Reta Schwartz, who was visiting from Cedar Rapids, Iowa.

Georgia Street will turn into a party and the convention center into a playground, but Schwartz isn’t going to let it all distract her.

“I am going to be aware of my surroundings, people, just watch and have fun,” she said.

Her plan is exactly what police are asking people to do in the wake of the shooting in San Bernardino, California.

It was echoed earlier this week by Troy Riggs, Indy’s former public safety director. “Don’t be paranoid, but realize that’s the world we live in today,” he said. “There’s major international threats that we have to be aware of as Americans, and [we should] have a plan. Be prepared but don’t be paranoid.”

Prepared for Big Ten fans means keeping an eye out for yourself and others. Families should also plan spots to meet if they get separated.

“We’re going to stay with each other throughout walking through the city and make sure we don’t get separated and just be with each other at all times,” said Matthew McGavin who was in town from Grand Rapids, Michigan.

Businesses aren’t taking any chances, either. Kilroy’s Bar and Grill has two entrances, but only the front entrance will be open during peak hours. The manager said it’ll allow them to better monitor who’s walking in and out since the crowds will be so large.

The restaurant also added more security for Saturday, and it’s a similar move happening at Ike and Jonesy’s.

“That’s just how we’ve done it for 32 years with large crowds,” said Ike and Jonesy’s owner Eric Eichholtz. He isn’t letting the recent shooting phase him nor his staff, and it’s the same mindset we found walking up and down Georgia Street.

“I’m not going to let any of the things, the violence and stuff that has happened in the United States or anywhere, stop me from having the things I want to do,” said Schwartz.

The Indiana Department of Homeland Security released a statement Friday emphasizing how perceived threats need to be taken more seriously in light of the San Bernardino shooting.

That means they want people to have a heightened awareness, not just when surrounded by big crowds such as the Big Ten Championship, but also in their neighborhoods and community.