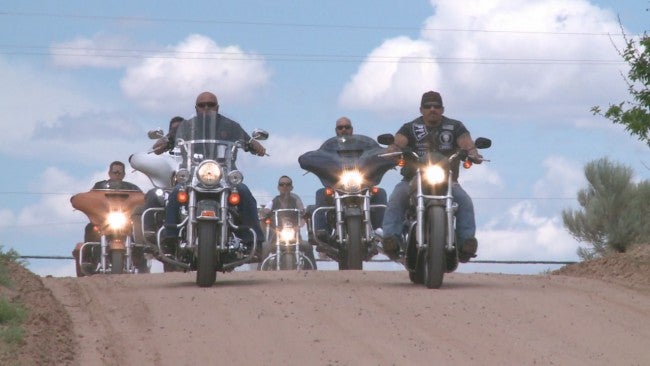 The girl who was bullied on her way home from school got an unexpected visit by the Punishers. They’re loud, big, burly bikers dressed in black. While the men may appear dark and dangerous, the Punishers, a law enforcement motorcycle club in Albuquerque, are far from it.

This week the group, made up of military veterans and former police officers, banded together with local self-defense group Shockwave to help a local girl in desperate need.

“We were asked to talk to a young lady who was a victim of bullying,” said Punisher’s member Aaron Holmes.

The victim is just 5-years-old and suffers from a mental disability. The girl’s family, who asked that she not be named, said she was walking home from school this week when some neighborhood kids jumped her and beat her up.

When the Punishers got wind of the story they immediately jumped into help.

“We rounded up all the bikes and we rode over to the little girl’s house and said hi,” said Holmes.

“When she walked out she was kind of wide-eyed,” said Gonzalez.

The biker group said once the girl warmed up to them they formed a special bond.

“We told her that we are always there for her no matter what,” said Gonzalez.

Gonzalez said they left her with a strong message to always stand up for yourself and in turn the men left feeling proud.

“Emotionally, it was a good feeling,” he said.

The Punishers are a national organization focused on helping people in the community.

The group in Albuquerque also sponsors a little league team.