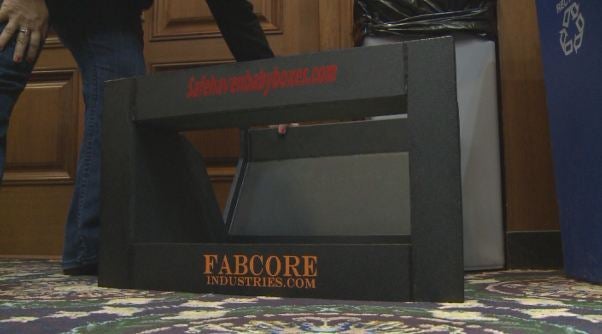 INDIANAPOLIS (WISH) – The push to allow incubators at Safe Haven sites in Indiana will go before the full House in the hope of providing full anonymity to mothers surrendering newborns and reducing the number of abandoned infant deaths.

“We’re giving these girls an option to not throw their children in the woods and not feel as if they’re shamed,” Monica Kelsey, president of Safe Haven Baby Boxes Indiana, a non-profit supporting the bill, said.

It was just last December when the latest infant was found dead, wrapped in a blanket at Eagle Creek Park in Indianapolis, prompting state lawmakers to get involved.

“It’s probably not easy for a troubled young mother to come face to face with a police officer and hand that child over, unfortunately, making it too attractive for them to take some tragic course,” Rep. Casey Cox, (R) – Fort Wayne, said.

The idea comes from other countries like South Korea, Canada and Hungary that are already doing this, but there’s little trace of this going on in the United States, aside from a few facilities here or there. Supporters here are developing one of their own, demonstrating an early prototype in Wednesday’s House public health committee meeting.

“When the door is opened, a 911 call will go out,” Kelsey explained. “When there is weight on the box, on the bottom part of the box, a second 911 call will go out. There’s also going to be a button inside for this woman to push. So there’s going to be three trips in this box so that no child is ever left alone for more than three to five minutes.”

Under the bill, the baby boxes would not be required at Safe Haven sites, but supporters hope they would be an option for better anonymity to mothers considering a safe surrender.

“That face-to-face interaction that our existing Safe Haven law requires is very intimidating for a troubled young mother,” Rep. Cox said. “We think this is a response to that problem.”

The bill is expected to go before the full House next Tuesday. If approved, it would move on to the Senate. If signed into law, it would take effect in July 2016.