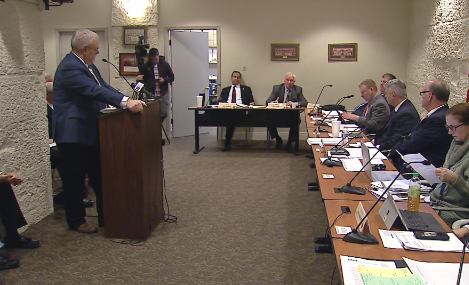 INDIANAPOLIS (WISH) — A bill that would prohibit local governments from banning short-term housing rentals through websites like “Airbnb” or “HomeAway” cleared a state Senate committee Wednesday.

But it took awhile.

In fact, the hearing on House Bill 1133 alone lasted more than two hours. More than 20 speakers rose to speak both for and against the bill.

“Our homeowner’s association is concerned about what may occur if this bill passes,” said one Carmel resident who rose to speak, referring to the bill’s ability to limit the power of local government.

Opponents like him argued that the bill is a prime example of state government overreach – that it strips local towns, cities or counties of their ability to enforce their own local ordinances that may restrict the use of such short-term rental agreements.

“I think there is something patriotic about welcoming in strangers from different states or areas to our state,” said Rachel Prince, a rental host who says she teaches others how to rent out their homes.

Supporters say the bill provides the proper balance or regulation and free market enterprise – that localities shouldn’t be able to impose outright bans on peer-to-peer transactions (both Carmel and Fishers have considered their options).

Lehman told I-Team 8 that the bill allows for local governments to impose certain requirements – but preempts them from imposing an outright ban.

I-Team 8 discovered that the language in the bill appears to be copied word for word from a model policy posted to the website of the American Legislative Exchange Council’s website.

Both the definitions of words contained in the bill and limitations in the bill are identical in both HB 1133 and the ALEC model policy.

ALEC, which hosted its national conference in Indianapolis last summer, has drawn criticism for its activities that critics charge blur the lines of the legislative process by placing lobbyists and lawmakers in the same room to hammer out these model policies.

Rep. Lehman denied that he got the bill from ALEC, adding that he is not a member. But he did say that he worked with some folks from Airbnb to draft the bill.

While the bill passed out of committee by a vote of seven to two, Lehman said there could be floor amendments added given concerns raised about enforcement of some of the bill’s provisions and questions about tax remittance and insurance.

The bill currently calls for limiting the short-term rental to less than 180 days per calendar year.

Some who raised concerns questioned if the 180 days could be reduced.