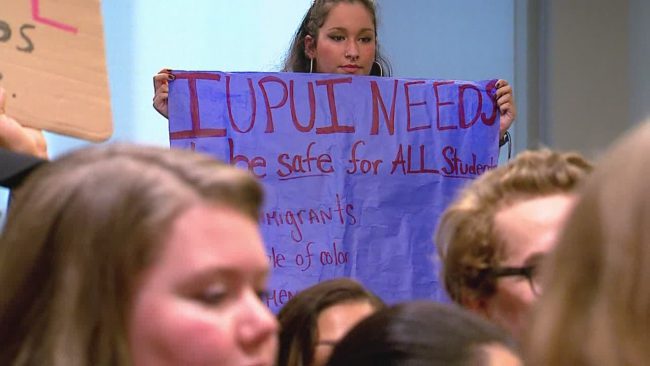 INDIANAPOLIS (WISH) — President Donald Trump’s executive orders in the first days of his presidency have struck a chord among supporters and sparked harsh criticism and passionate protests around the globe.

After banning travel to the U.S. from those who live in seven Muslim-majority countries, Trump has also drawn headlines for renewing calls to build a wall on the U.S. – Mexico border. A portion of one of those executive orders also threatened to take away federal grant money from so-called “sanctuary cities” that often refuse to turn over illegal immigrants for deportation.

Indiana banned “sanctuary cities” in 2011 as part of a piece of legislation that later became state law.

Now a bill in the legislature seeks to extend that law one step further – by banning the creation of “sanctuary campuses” at universities throughout Indiana.

Sen. R. Michael Young is one of the bill’s sponsors. He says the idea for the bill came last fall after he watched news reports of hundreds of students protesting on the campus of IUPUI.

The students were protesting several things: some were there to protest Trump’s win in the election; others were upset about racist fliers that had been posted on campus. Dozens of students marched into the chancellor’s office and presented a petition asking that IUPUI become a “sanctuary campus.”

But what does that mean?

It depends on how you define it, according to university professors who weren’t permitted to speak for the university.

On one end of the spectrum, some students were asking for the creation of a safe environment where students could be free of torment or bullying. On a more concrete level, some could view the “sanctuary campus” title as meaning the university would protest undocumented students from being deported, or that the university would refuse to accept deportation orders issued by the federal government.

Young said: “We want to prevent that from occurring. We want to be welcoming for everybody, but we also want everybody to follow the law. The law should be equal.”

Senate Bill 423 has not had a hearing, but Young said as chairman of the committee, it would likely come up for discussion later this month.

Still some have questioned whether there could be potential conflicts with this bill and federal law.

The Family Educational Rights and Privacy Act, better known as FERPA, places strict limitations on what information universities can share about students who attend those institutions.

“We just don’t know yet (how it will interact) with FERPA,” said Samantha Paredes Scribner, an associate dean of education at IUPUI.

The text of the bill can be read here.

Hector Morales, an IUPUI student who helped organize and lead the protest in November, shared this with I-Team 8 Monday: “I think (it’s) sad that this bill was created instead of focusing on what Hoosiers believe to be more important like infrastructure (Bridge over I-465 collapse), or how about getting better Health care for our veterans … or improving education for our students, giving more incentives to our teachers,” Morales said in an emailed response.