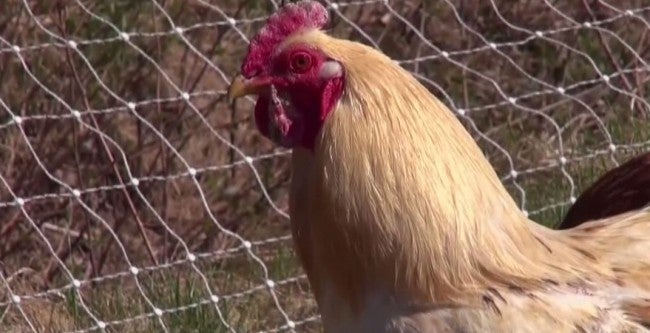 Indiana has banned bringing birds to events where they would be mixed together. That means no chickens at places like flea markets, swap meets, and sale barns.

Another thing the ban does is prevent kids from showing off their chickens during 4-H. It’s a ban that’s expected to last throughout the year, or until further notice. It’s statewide, affecting the Indiana State Fair, as well as county fairs.

The age old question, ‘Why did the chicken cross the road,’ remains unanswered. But we can eliminate the possibility of it crossing to get to the county fair, at least not this year.

“I was really excited and I got really upset because I didn’t get to show my chicken,” said 4th grader Ella Koch.

The Indiana State Board of Animal Health has banned the commingling of birds, a disappointment for Ella, who was certain she’d take home top prize at Shelby County’s fair this year.

“We got new chickens and they’re this big. We have one named Donut and one named Daisy,” said Koch.

Ella was hoping to show off her new chickens during 4-H. But, instead, she showed off her accolades from last year.

“I got this one for my Chicken Rosetta. It was my first year last year. I showed. Got 2nd place with my blue,” said Koch.

Louie Koch is Ella’s dad. 4-H is something he, his wife and and 3 daughters looks forward to each year.

“As hard as my children work all year long on taking care of their animals, it’s a disappointment when they can’t get that time (and) satisfaction out of getting a reward for their hard work all year,” said Koch.

The state is trying to prevent the spread of H5 avian influenza virus, or the bird flu, which has claimed the lives of 40 billion birds in 16 states according to the BOAH. Earlier in the month, a flock was diagnosed with the deadly virus in Indiana.

If it means keeping her chicks safe, for Ella, it’s a fair trade.

“I don’t want any of them to get hurt, because we have some old ones and some young ones,” said Koch.

The state encourages all poultry owners who notice illness in their birds to call the Healthy Birds Hotline at 866-536-7593.

According to the state, the bird flu does not affect the poultry that we eat.

Click here for more information on the bird flu.