Blackhawks lose 4-3 to Lightning in Game 2 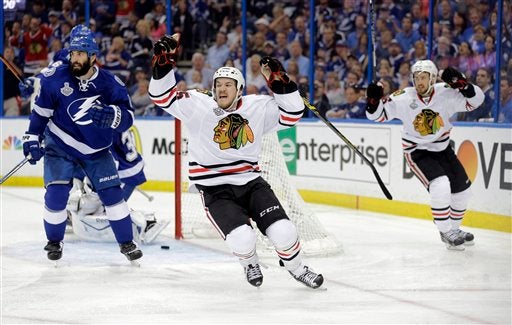 TAMPA, Fla. (AP) – The Chicago Blackhawks let a chance to take a 2-0 lead in the Stanley Cup Final get away.PHOTOS | Images from the game

Jason Garrison scored the tie-breaking power-play goal with 11:11 to play, rookie goalie Andrei Vasilevskiy relieved Ben Bishop twice to earn the victory, and the Tampa Bay Lightning beat the Blackhawks 4-3 in Game 2 on Saturday night to even the series.

“We’re satisfied with the effort, not the result,” Chicago captain Jonathan Toews said. “Sometimes they slip away from you. Give up goals every time we tied or got back into it.”

Since going to a best-of-seven format in 1939, a team that takes a 2-0 series lead has won the final 44 of 49 times. Ten of the 12 teams that have won the first two games on the road have won the series.

Game 3 is Monday night in Chicago.

“We get to go home, get excited, play in our building,” Blackhawks coach Joel Quenneville said. “I’m sure everyone will be loud with us coming back. We’ll be all right.”

Nikita Kucherov had a goal and an assist for the Lightning, who played with all the aggression they lacked in the third period of Game 1 when Chicago rallied late to win.

Tyler Johnson and Cedric Paquette also scored for Tampa Bay, which curiously made three goalie changes in the third period. The 20-year-old Vasilevskiy twice replaced starter Bishop and made five saves in 9:13 to earn his first NHL playoff win.

“Before we get going, and I hate to be that guy, (but) I will not answer a question about the goal tending or what happened tonight,” Tampa Bay coach Jon Cooper said.

“The one thing about Vasilevskiy, I know we have 2 unbelievably capable goaltenders,” Cooper added. “When Bish had to leave, there wasn’t an ounce of stress on anybody on our bench, including myself. The kid proved it when he went in. He was great.”

Vasilevskiy has 16 regular-season games of NHL experience, and he had played in just two games since March 31. But the Russian came in for 92 seconds before Garrison scored the go-ahead goal, and he returned to finish the game with 7:41 to play, earning the victory.

Andrew Shaw and Teuvo Teravainen scored 2:16 apart early in the second period for the Blackhawks, who couldn’t follow up their Game 1 comeback with another.

Just over five minutes after Seabrook scored, Garrison put the Lightning ahead when his shot deflected off a Chicago player in front of Corey Crawford, who stopped 20 shots in an uninspiring effort. The goal was just Garrison’s second of the postseason.

The Lightning again showed off the resilience that got them to this lofty height, improving to 4-0 in Game 2 of their four postseason series after going 1-3 in Game 1. Tampa Bay has lost two straight games only once in the entire playoffs.

The Lightning blamed their 2-1 loss in the opener on too much caution in the third period, when Chicago scored two late goals to win. Neither team showed any particular caution from the start of Game 2, skating aggressively and working hard for offensive chances.

Paquette put a long shot through heavy traffic late in the first period for his first goal since April 27, ending a 13-game drought.

Shaw made his biggest impact on Game 1 when he apparently bit Lightning defenseman Victor Hedman, but the aggressive forward affected Game 2 early in the second by getting in front of Bishop and outfighting Garrison for a loose puck.

During a power play moments later, Teravainen executed a give-and-go with Marian Hossa for his second goal in two games. The 20-year-old Teravainen scored the tying goal and assisted on Antoine Vermette’s winner 1:58 apart in Chicago’s Game 1 victory.

The Lightning swiftly tied it up on a back-to-the-net, between-his-own-legs deflection by Kucherov, the gifted Russian who scored 29 goals in the regular season.

Johnson then ended his five-game goal drought with his NHL-leading 13th goal of the postseason. Crawford probably should have saved the backhand by Johnson, but it slid across his sweater and dropped in for Johnson’s first goal since Game 3 of the Eastern Conference finals.

“It’s frustrating, for sure,” Crawford said. “I felt good. But it’s not good enough, especially when we get momentum. We score a goal on the power play and they come back with those two. Can’t let that happen.”

Seabrook evened it with 16:22 left in the third, teeing up a hard shot with no opposition after the Tampa Bay defense got distracted by Toews. Bishop claimed Hossa interfered with him on top of his crease, but the goal stood.

NOTES: Chicago’s Bryan Bickell sat out his second straight game after getting hurt in Game 7 of the conference finals in Anaheim last weekend. The Blackhawks haven’t disclosed the nature of Bickell’s injury, but the forward said he passed the league’s concussion tests. … Quenneville coached his 200th playoff game. He joins Scotty Bowman and Al Arbour as the only coaches to do it. .. Toews had an assist to become the 92nd player to reach 100 playoff points.