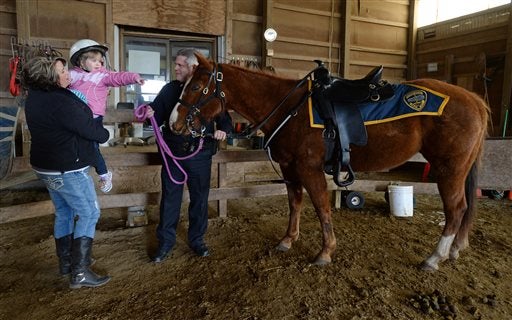 But he didn’t want to just turn 9-year-old Nipper out to pasture.

“We started looking for other options for her to give her a job because she needs a job,” said Benedict, supervisor of Richmond Police Department’s traffic division. “She’s a young horse yet.”

So he thought of Sunrise Therapeutic Riding Center, a Wayne County nonprofit that promotes health and social development of the physically, mentally and socially disabled through horseback riding.

Executive director Becca Funk was ecstatic to add Nipper to Sunrise’s herd. Well, after Benedict gave her some cause for concern.

“I pulled in one day and Donnie was out here in his cruiser and I was all worried that something had happened to the barn,” she told the Palladium-Item. “I walked up and first he convinced me that I had done something wrong. So he was joking around with me, and then he said, ‘We’ve got a horse that we want to donate.’

Benedict, whose family had owned Nipper for nearly six years, brought the horse to the barn, and his daughter, Francesca, walked Nipper through the Sunrise facility. Francesca has won 4-H competitions in barrel racing and pole bending on Nipper, a registered quarter horse.

Benedict said Nipper had been blind in one eye for a while but it went undetected because of her 4-H and mounted patrol performances. When Nipper began running into things, though, a checkup revealed cataracts in both eyes.

“Cataract surgery is very expensive for horses, and there’s not a real good success rate at this time,” he said. “It’s kind of unusual for a 9-year-old to develop cataracts, so here she is at Sunrise.

“They take good care of her out here. She’s good and fat. She gets lots of attention and treats. It’s a good deal for her. Our family is happy that she’s out here because she’s got a job versus just standing out in a pasture somewhere.”

On Friday, Nipper’s rider was 4-year-old Emma Lipps, the daughter of another RPD officer, Austin Lipps. Nipper was calm and quiet – just occasionally flicking her head and whinnying – while waiting for Emma to be put in the saddle and begin their walk.

“She loves coming out here and giving them treats and petting them,” said Emma’s mom, Beth Juerling-Lipps. “She has other therapies, too, but she loves riding horses.”

Juerling-Lipps said the horses help Emma with her balance and core strength.

Nipper needed to be calm as a mounted patrol horse because of all the activity swirling around the horses and officers. That makes her an ideal addition to Sunrise’s herd of 12 horses and one pony.

Benedict said in 4-H and mounted patrol, Nipper had proven to be very trusting and to take care of her rider. That’s also an important asset for Sunrise horses working with students who lack balance.

Those horses also help take care of Nipper. Because of the blindness, she follows them as a security blanket.

“She’s getting along well in the herd,” Benedict said. “So far, she’s worked into the program pretty good, so we’re happy she’s got a job.”