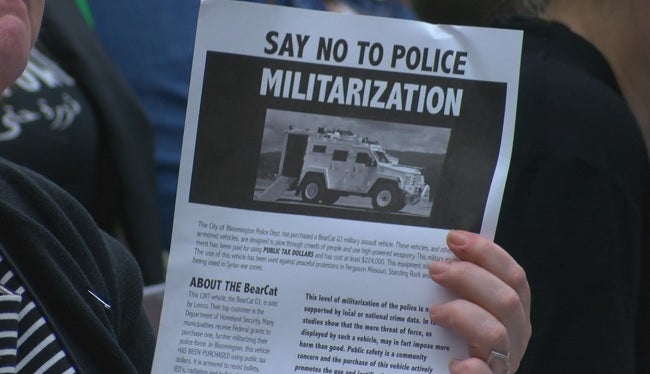 BLOOMINGTON, Ind. (WISH) — Dozens of people attended a town hall meeting in Bloomington on Tuesday after learning about plans to purchase an armored truck for the police department.

Many had strong opinions about the purchase of the CIRT vehicle. Some say it militarizes the police department, while others say it helps keep officers and citizens safe.

The town hall meetings were planned after Black Lives Matter protesters brought the Mayor John Hamilton’s State of the City address to a halt last week.

“I think it is going to start a shift in our culture and our values. We let one vehicle in, soon we may need a different piece of equipment. One thing leads to another as the song says. We want to stop it before it starts,” said Vauhxx Bookeo, organizer of Bloomington’s Black Lives Matter group.

Protestors also say the city was not transparent before signing a contract to purchase the truck.

“I will admit that we did not do a good job of getting this out to the general public, so we are hoping to make up ground now so that people understand it better,” said Chief Michael Diekhoff with Bloomington Police.

The vehicle would replace a similar truck the department had years ago, but retired due to mechanical failures. The cost of the new one is about $225,000.

“They had an armored vehicle in the past. It has been used well. It was not abused, so far as I can tell, and we live in a dangerous world and we depend on having the capacity to respond to dangerous situations,” said Mayor Hamilton.

“It is not an offensive vehicle, it is a defensive vehicle to protect memebers of my department when they respond to dangerous sitautions where usuaslly gunfire is involved,” said Chief Diekhoff.

Some at the meeting say it changes the relationship between the public and the police.

“Suddenly they go from being protectors and guardians to having more of a war mentality,” said Bookeo.

If everything moves forward as planned, the truck will be delivered this summer.

There are still three remaining meetings on this topic. For more information, click here.

by: Annessa Chumbley / 25 mins ago