BlueIndy program up and running 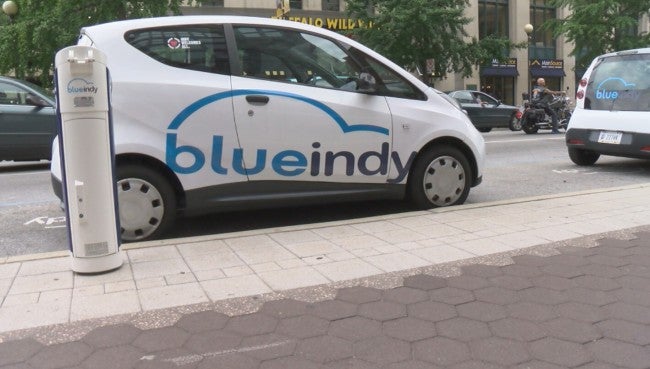 INDIANAPOLIS (WISH) – A new way to get around the city of Indianapolis officially launched Wednesday.

BlueIndy is the electric car-sharing program that lets you rent a car at one spot and drop it off at another if you’d like.

Officials had said they’d like to see nearly 200 charging stations and 500 cars throughout the city when all is said and done. They held a press conference Wednesday morning to officially launch the program. You can watch that below:

Scott Prince, the general manager of BlueIndy, told 24-Hour News 8 in July the Indianapolis program “will be the first showcase launch in America.”How does it work?

You’ll need a driver’s license and credit card to enroll and get a BlueIndy membership. You can sign up online or at certain enrollment kiosks.

Once you’re approved, you get a badge that allows you to unlock one of the cars, which you then unplug and can start.

You can get a daily, weekly, monthly, or yearly membership, and you’re charged for the minutes you use the car.

The amount each minute costs goes down, depending on how long a membership you decide on.

If you chose just a daily membership, it’s $8 for 20 minutes, then 40 cents per minute after that.

You can reserve a parking spot if you know you’ll use the car 30 minutes in advance.

On BlueIndy’s app or on its website, you can see where the stations are throughout the city, and how many cars are available at each station.Neighbors, councilors voice concerns

The launch of BlueIndy has come with controversy. Some living near the new charging stations and business owners that are nearby have voiced concerns about the program taking up valuable parking spots.

Some City-County councilors have also voiced concerns about the way the contract was signed and how it will be paid for. On Tuesday, several councilors called a news conference about what they call “significant contractual discrepancies and implementation challenges” for the electric car program.RELATED STORIES:

Indianapolis Mayor Greg Ballard says the money will not come from public safety funds, rather it’ll be from infrastructure funding.

He defends the program as a way to fill in a public transportation gap in Indianapolis. Ballard says it puts Indianapolis in the company of other cities with electric car sharing programs – such as London and Paris.