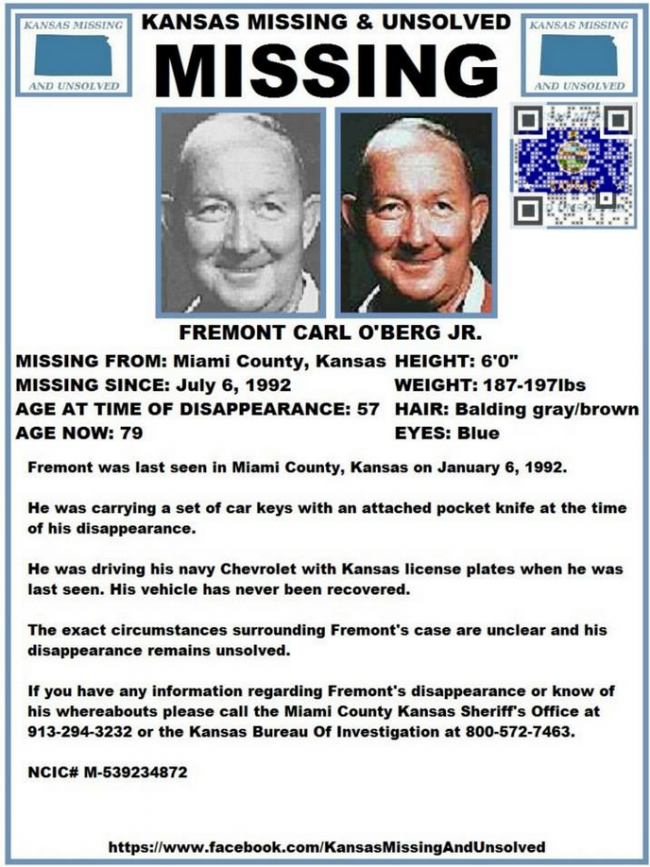 PAOLA, Kan. (AP) – The disappearance of a Kansas man 23 years ago has been solved after authorities identified a body found last week in a car pulled from a lake near his home.

Miami County authorities said Tuesday that an autopsy determined the body was that of Fremont O’Berg, 57, who was living in rural Paola, Kansas, when he went missing in January 1992.

His remains were found after a fisherman using underwater sonar equipment on Friday detected what appeared to be a submerged vehicle about 40 yards from a boat ramp in Hillsdale Lake.

The body was found in the driver’s seat of the 1981 Chevrolet Citation registered to O’Berg after the vehicle was pulled from the lake.

The Kansas City Star reported that information circulated after O’Berg’s disappearance noted he suffered from heart and liver issues as well as acute bronchitis.

But undersheriff Wayne Minckley told The Associated Press it will be difficult to determine the cause of death because of the length of time the body was in the water.

“They look for any suspicious injuries prior to death,” he said. “That’s going to be difficult to tell because of the decomposition. We could be talking about driving into the lake on purpose, or it could be an accident where the car rolled into the water.”

The lake and several other bodies of water were included in a search around Miami County when O’Berg disappeared, the sheriff’s office said.

O’Berg’s family, who Minckley said has mostly moved out of the Paola area, released a statement Tuesday saying the recovery of his body “answers many questions and is bringing much needed closure for our family.”

“We are fully confident that the Miami County Sheriff will continue to see this case through to its completion,” the statement said.

The family thanked authorities for their efforts and asked the media for privacy.