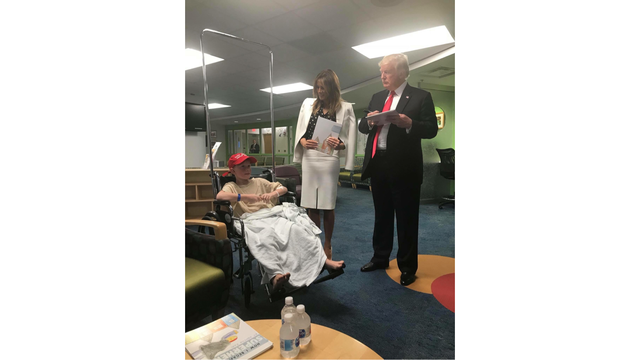 COLUMBUS, Ohio (WVNS) – A West Virginia boy’s dream to meet the President and give him a copy of his book became a reality thanks to the help of staff at Nationwide Children’s Hospital.

Ashton Zari, who is 8 years old, is a patient at Nationwide Children’s Hospital in Columbus, Ohio. His mother, Amanda Zari, told News 8 sister station, WVNS, her son has a chronic kidney disease and recently had reconstructive surgery on his bladder and bowel.

Amanda said Ashton heard the president and first lady would be visiting the hospital and told his parents he wanted to give the commander in chief a copy of his book, “How I Became A Super Hero.”

“As a momma, I try to help Ashton set realistic goals, and it was hard not to discourage him,” Amanda said.

Amanda said she told hospital staff about her son’s wish. She said within the hour, Ashton had White House staffers in his room with gifts from the President.

A few hours later, Ashton and his family were asked to go into another room where they met President Donald Trump and First Lady Melania Trump.

“This was an experience I am struggling with finding adequate words to sum up,” Amanda said. “President Trump was kind and empathetic. He spent time engaging with Ashton, asking him about his book, and even calling him a young entrepreneur. He was genuinely interested in Ashton’s health and asked many questions about Nationwide Children’s Hospital and the Ronald McDonald House Charities of Central Ohio. This is something that I never in a million years dreamed would ever happen for Ashton, and I am so humbled that President Trump and the First Lady would take time out of their incredibly busy schedule to spend time encouraging a very medically fragile eight-year-old.”

Amanda said Ashton is still recovering from his surgery, but they hope he will be discharged from the hospital sometime this week.