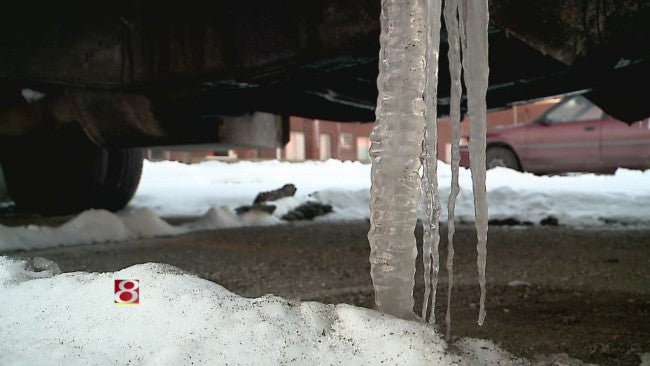 INDIANAPOLIS (WISH) – An apartment complex on the west side can’t seem to catch a break this winter.

From broken boilers to busted pipes, maintenance crews working around the clock to keep people from going cold at the Maple Creek Village off West Michigan Road.

Some tenants have been going without heat. Management has a few options for them to keep them warm including space heaters or shifting them temporarily to a different unit.

Rooms for rent can be found all around the Maple Creek Village, but on a tour led by property manager Kevin Krulewitch, we were shown rooms in need of repair.

“They came into here and then water was gushing out onto the floor, out into the common hallway,” he said describing how maintenance workers discovered a leak. A cracked pipe in the wall was to blame.

It’s the same story one building over and it all started not because of the chilly temps outside, but broken boilers down below. Replacement units took weeks to ship in. Resident Jacob Jones described the cold nights as a nightmare.

Six new boilers were installed. The problem is when the heat was turned back on, pipes that had cracks in them thawed which led to the leaks. While they work to repair the leaks, the boilers can’t be running.

It’s feels like a never ending cycle for Krulewitch. He’s just hopeful his tenants keep their cool as his staff works on keeping them warm.

“I guess at the end of the day, knowing that you’re getting things fixed is positive. It’s not easy and I give credit to the staff and I certainly give credit to the residents for understanding and dealing with the situation,” he said.

Jones complimented the maintenance crews for their hard work and is trying to stay patient.

“You see them, boy from sun up to sun down,” Jones said.

On top of replacing six boilers, two more were able to be repaired on site. The price tag for the problems only makes matters worse.

Krulewitch said because of all the leaks, their water and sewage bill has more than doubled. He said this time of year, the complex typically pays around $4,000 a month, but this January and February it’s cost around $9,000 a month.

Tenants are being asked to conserve water as they work on repairs.