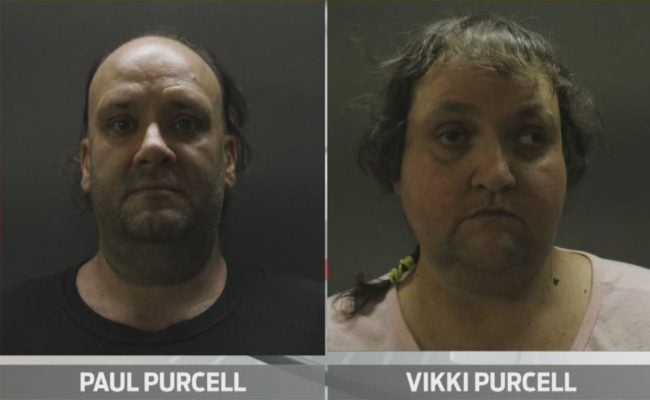 The dogs all survived, but doctors are still nursing some of them back to health. Neighboring shelters picked up dozens of the dogs from the Owen County Humane Society. The dogs fought through hunger, ticks and tumors, according to the shelter workers.

Becky Brown of the Owen County Humane Society learned of the arrests and charges Monday.

“We’re thrilled with it,” she said. “The animals deserve somebody to speak up and say, ‘That’s not right.'”

In mid-May, a neighbor called police to complain about rats crawling from the property. Sheriff Leonard Sam Hobbs said his team found thousands of rats living with the dogs.

“You see stuff like this on TV, but when you’re first hand looking at it, it takes you back. It kind of takes your breath away a little bit,” Hobbs said.

Court documents said Paul Purcell told police he’s a minister and he wanted to run an animal sanctuary. He said some of the dogs were strays.

According to the court document, he described the dogs as healthy. Shelter workers, on the other hand, said one of the animals is fighting heartworm, doctors are treating one for internal bleeding and nearly all of them showed signs of malnourishment.

“With some of the dogs, we don’t know if they got into rat poison,” Brown said. “We have one that’s still a little grouchy, still unsure of his surroundings. We have to give him a bit more TLC.”

Health workers said the Purcell home is unsafe for dogs and humans. A judge granted a motion to demolish the home last month.

“Please do not ever, ever get another animal. He made that agreement in court and he should stick with it. He doesn’t deserve one,” she said.

The Purcells are each facing one infraction and one misdemeanor. Shelter workers said felony charges would only be possible if the suspects had a criminal history of the same activity.

Nine of the 11 dogs still in Owen County are available for adoption.