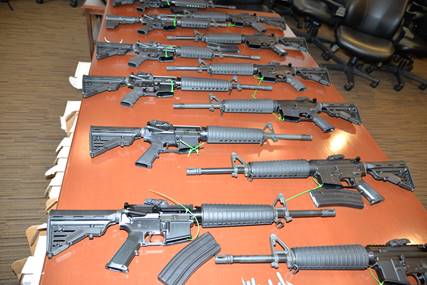 INDIANAPOLIS (WISH) – A federal grand jury has indicted two Fishers brothers on charges of making and trying to provide firearms and other resources to the Islamic State.

Moyad Dannon, 21, and Mahde Dannon, 20, were indicted last week and set to be arraigned Thursday, said a news release issued Thursday by the office of U.S. Attorney Josh Minkler with the Indianapolis district federal court.

The brothers have been detained by the U.S. Marshals Service without bond since May 15 while they await trial. It was not immediately clear where they were being detained.

A statement from Grant Mendenhall, special agent in charge of the FBI’s Indianapolis Division, said, “This case is the first of its kind for the Federal Bureau of Investigation where you have individuals allegedly making guns to sell and/or send overseas to ISIS. This indictment paints a vivid picture of the rapid rise of homegrown violent extremism and the lengths people are willing to go to in their support of terrorist activity.”

The indictment came after a monthslong investigation by the FBI and Fishers police. Court documents said the brothers sold firearms from their home in Fishers and a parking lot on the Indianapolis north side, and the firearms were made at a rented apartment and an office space in Indianapolis.

Their Ashwood subdivision home is in the 10600 block of Summerwood Lane in Fishers. That’s near the intersection of East 131st Street and Promise Road.

In June 2018, the 20-year-old hatched a scheme to deliver firearms, some that were stolen, to a convicted felon who was cooperating with the FBI. The indictment said Mahde at the time was awaiting trial on felony theft charges in Lake County, Indiana.

Between July 2018 and December, the brothers sold a number of illegally obtained firearms to the felon. During the same time, the brothers also started to manufacture untraceable semiautomatic, .223-caliber rifles by buying and assembling unserialized firearms parts. The indictment called the firearms “ghost guns” because the lack of identification numbers makes the guns untraceable.

In late 2018, the brothers approached the convicted felon with a plan to make fully-automatic, .223-caliber rifles using the “ghost guns” process.

In February, the brothers built one fully-automatic rifle and gave it to the felon. A short time later, Moyad accompanied the felon to the southwest U.S. border to try to sell that rifle as well as other fully-automatic ones to a potential buyer who also was cooperating with the FBI. Moyad learned that the buyer intended to ship the rifles to a location in the Middle East, where they would be used by ISIS, the indictment said. Eventually, the brothers agreed to make and sell at least 55 fully-automatic “ghost gun” rifles to the buyer with the knowledge the firearms would be sent to ISIS and its members in the Middle East.

As part of that agreement, the brothers on May 15 sold five fully-automatic, .223-caliber rifles in the “ghost gun” process to undercover FBI agents posing as employees of the buyer.

The charges against the brothers could result in a maximum of 30 years in prison.