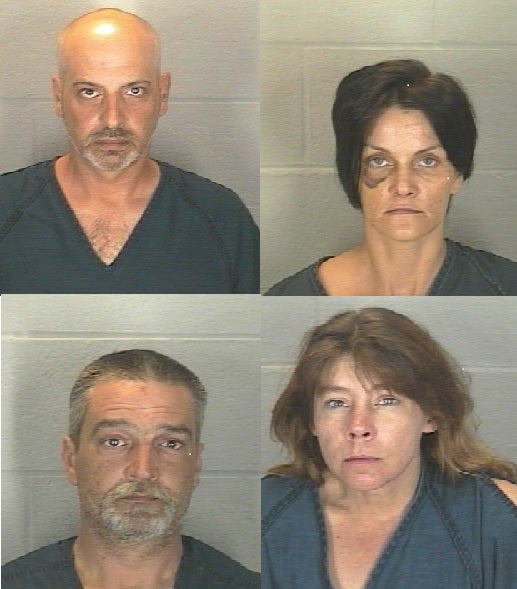 LAFAYETTE, Ind. (WLFI) – Four people have been charged for a series of robberies at a Lafayette pharmacy. Police said two brothers and their wives robbed the CVS on Old U.S. 231 three times before they were caught.

Jeffrey Odom, his wife, Temple, and Kevin Odom and his wife, Theresa, all of Hillsboro, face a combined 40 charges between them. The charges include robbery, theft and possession of a narcotic drug.

According to court documents, the CVS reported a robbery on April 18. A woman walked into the pharmacy and displayed a note. The note demanded a variety of pills and said not to call police because she had a gun. She then left with a man.

On May 17, a similar robbery happened at the same CVS and a woman got away with more pills.

On May 23, officers responded to third robbery at that CVS. They said a woman and man leaving the store that matched the description. Prosecutors say the man took off and hopped in the bed of truck, driven by Kevin. Officers were able to catch the woman who was identified as Temple Odom.

Temple Odom admitted to robbing the pharmacy on all three occasions and identified the other people involved.

Temple also told investigators that they decided to rob the pharmacy a third time because she and Jeffrey were in a wreck in Montgomery County and police took the pills from the first two robberies.

Jeffrey, Kevin and Temple each face 11 charges. Theresa faces seven charges as investigators say she wasn’t a part in the third robbery.

All remain in the Tippecanoe County Jail Thursday night.