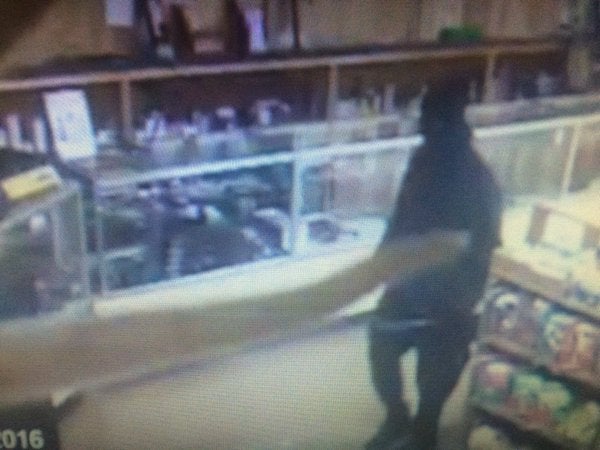 “It’s extremely frustrating,” Hinton said. “They always seem to figure a way out-or a way in, actually-to the building.”

Less than a year ago, police arrested four people for stealing about 50 guns from the shop. Hinton’s team responded by chaining the doors and locking most of the guns in a safe. They didn’t lock up the muzzleloaders but Hinton said they will now.

“Any time there’s a gun shop, you’re always a target,” Hinton said. “It just puts us in a bad spot when this happens to us.”

But what else can he do?

“Barring putting a mean dog in here, I don’t know what we’re going to do yet. But we’ll figure something out,” he said.

Police said the suspects are both males.

One is between 5’7″ and 5’10″. During the burglary, he wore all black clothing and a hooded mask.

The other suspect, police said, is between 5’5″ and 5’7″. He wore all black clothing and a red shirt.

Police are still looking for some of the guns stolen from the shop last summer. The store was also burglarized in December of 2014.