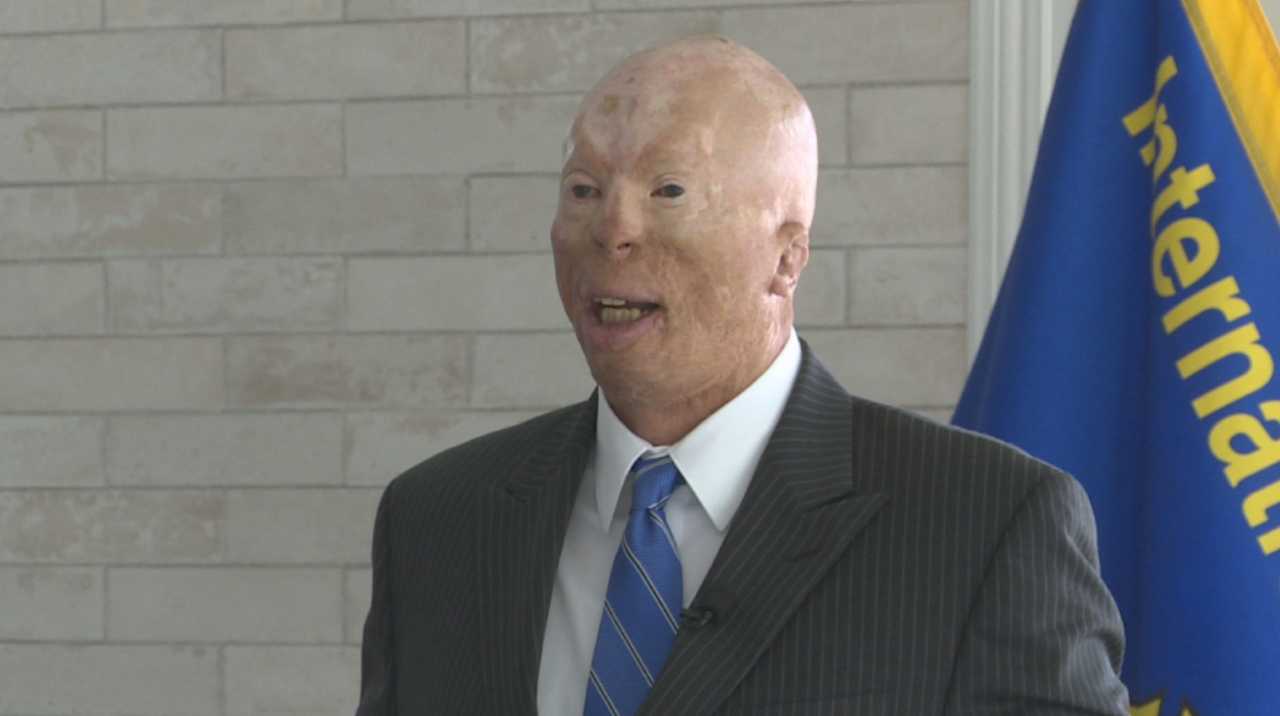 Tuesday, he turned his sights on law enforcement and firefighters.

“My story is a journey. There’s a lot of bad, but the end of it is nothing but positivity and love and good and that’s what I want them to see,” said Schecterle before his speech.

His story begins in Phoenix in the 1980s where Schecterle says he lived nearly three decades of life without death, divorce or health struggles. He served in the Air Force, married and had two children, and had finally achieved his dream of becoming a police officer for the Phoenix Police Department.

After nightfall on March 26, 2001, Schecterle was traveling with lights and sirens to an apparent homicide scene. “Just as I’m going to go through the intersection my patrol car was struck from behind,” he said. “The driver was having a seizure at the time. He was doing 115 mph when he ran into me.”

Schecterle said he never saw the car, a taxi, coming. He said his Crown Victoria patrol car was thrown forward 270 feet and burst into flames.

Incredibly, Phoenix Fire Engine No. 5 was sitting at the same intersection as Schecterle and traveling to the same apparent homicide scene.

“I can’t tell you how many miracles and twists of fate went into putting a firetruck in the exact intersection at the exact moment that I needed them most,” he said.

The three firefighters immediately rushed to the patrol car with nearby police officers and with great risk to their own safety. They removed Schecterle’s unconscious body from the flaming car.

“This other police officer wearing just a short-sleeved polyester uniform crawled into the cab of that car, into the fire, to help get my legs and feet free,” Schecterle said. “Cops and firefighters have a job to do, but going above the call of duty is something very special.”

Crews rushed Schecterle to the burn unit of a hospital just 2.5 miles away. They were certain he would not survive more than a few hours.

The taxi driver and his passenger, a recently released inmate from the Maricopa County Jail, both survived the accident. The taxi driver would later face charges related to the crash for not disclosing his medical condition.

Schecterle said he was on the trauma table in front of a doctor within eight minutes of the accident, considered to be a miraculously fast response time.

“I suffered burns to 43 percent of my body. My neck, head and face being the worst. They were fourth-degree. That’s a term I had never heard,” Schecterle said. “I thought third-degree was the worst burns you can have. Fourth-degree, down to the last layers of muscle and to the bone.”

Schecterle also suffered burns to his hands, arms and the tops of his thighs. His chest and back were unmarked, something he credits to his bulletproof vest. If his chest would have burned, he would have quickly suffocated.

A medically induced coma erased the next three months for Schecterle. When his doctors finally woke him up, they warned his wife he would be blind, possibly deaf, and suffering from the severe emotional and mental trauma of losing his senses, face, health, job and future.

Schecterle woke up with his hearing intact and, after a series of skin grafts from generous organ donation families, he would also later regained his vision. He credits the his organ donors with his life, saying the amount of exposed muscle would have meant his death if not for the valuable biological bandage of skin and tissue transplants.

He would soon have all his senses, but the emotional trauma hit in full force.

“I was crying every single day. What are my kids going to think of me? I’ve lost the job that I loved so much,” he said.

Then one night in his hospital room, he made a decision.

He said the next day he asked the doctors when he could go home. They responded with seven months. Jason Schecterle smiled and told the audience he made it home in one month.

“Can you imagine how personally motivating it was to be six months ahead of the expert’s schedule?” he said.

His road to recovery was long and still filled with trials, but he said he was determined. Schecterle said there’s nothing more powerful as a made-up mind.

Within 18 months of his accident, Schecterle got inside his truck by himself and drove back to work.

“Life is truly 10 percent what happens to you and 90 percent how you react to it,” he said. “You’re absolutely in control of your attitude. All the time.”

Despite losing several fingers, he relearned how to fire and reload his handgun. He became a homicide detective and said he was proud to provide a voice to the voiceless. Five and a half years after his accident, he retired from the Phoenix Police Department.

Throughout his recovery, Schecterle carried the Olympic Torch for the 2002 Winter Olympics in Salt Lake City. He also threw out the first pitch at an Arizona Diamondbacks baseball game. He had a third child with his wife and credits his youngest son with his most powerful healing. Recently, he walked his daughter down the aisle at her wedding.

“That taxi driver, what he did that night, I can’t change that. Because of his choices, because of my choices, my life is forever changed, my appearance, my career,” he said. “Was I supposed to give up after that? No way.”

The audience of firefighters and police officers watched intently during the presentation, wiping away tears and laughing with Schecterle as he shared the humor he’s found in his new face. Some said given the trouble they’ve seen in the city this year, this is the message they needed to hear.

“It’s encouraging to hear someone to go through such great tragedy and have such great triumph,” said Deputy Fire Chief Fred Pervine. “Today, I had one of those gloomy days and I was so glad that the chief say, ‘Hey, let’s walk down and hear it,’ and it helped me today,”

IMPD Detective Tracey Lomax said, “Even though you can go through something that he went through, you can still go on with life to be blessed and thankful.”

Schecterle published a book on his experience, “Burning Shield.” He also has more information on his life and story on his website.