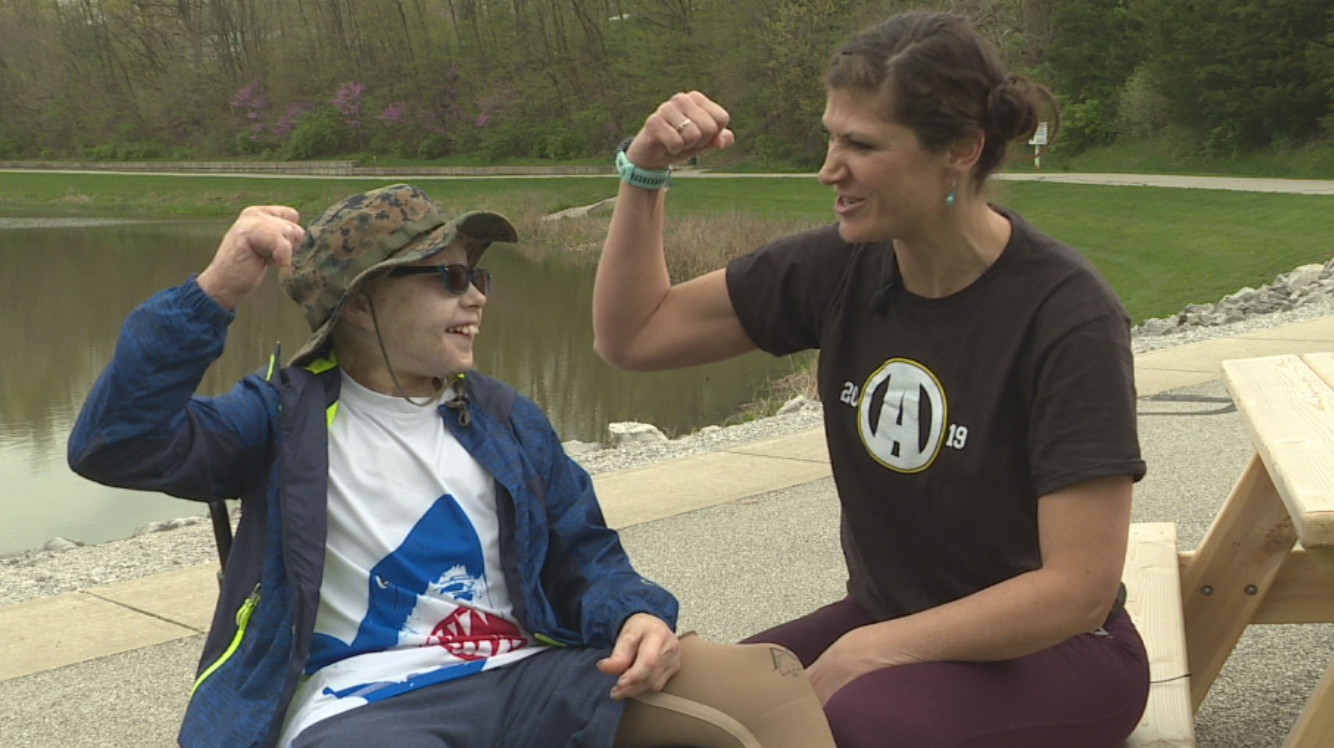 AVON, Ind. (WISH) — A racing duo from Hendricks County are turning heads ahead of the 500 Festival Mini Marathon for their message to end child abuse.

Owen Mahan, 11, is a burn survivor, double amputee, 5th grader, and Star Wars Fan. His adopted mother Susan Mahan explained to News 8 back in March how he was burned by boiling water in a bathtub at the age of two. Despite receiving burns to 98% of his body, Owen survived and was placed into foster care.

After dozens of surgeries, Owen continues to follow his mantras: “Today’s going to be a great day,” and “Be Kind.”

Alli Louthain, a mother of four in Avon, heard about Owen through her friend, Owen’s nurse. The two decided to take on the Mini with Owen in a pushchair and Alli running behind. Alli says she’ll handle the 13.1 miles if Owen will continue to be bright and positive and share his unique story of triumph over adversity.

“You create your own ‘happy’ and I feel like Owen is such an amazing example of taking whatever life has given him and we can follow that example,” said Louthain. ” We can choose to have an ‘I can’ attitude.”

The chilly, rainy weekends have made training tough for “Team Luke and Leia,” a reference to May 4th’s Star Wars Day. But a rare sunny day brought the two families together at Avon Town Park.

“Do-do-do-do– Charge!” said the two as they trained, rehearsing their many mantras, catchphrases, and stunts.

“Poppa-?” called Allie. “Wheelie!” answered Owen, as Allie balanced the pushchair on its back wheels, enabling it to turn to follow the track.

“I am nervous,” she laughed. “I’ve run half marathons but I’ve never done anything like this before.”

Louthain said she’s nearly 40 and is not an avid runner. She says Owen is her motivation to train to be able to help him accomplish his goals.

Owen’s mother is also a bit nervous but says she knows she needs to let her son grow and learn.

“What if he tips over?” said Susan Mahan. “But this is something he wants to do. He wants to spread awareness.”

Right now his mother says Owen’s solution is kindness, and perhaps an eventual meeting with President Donald Trump to brainstorm how to end the problem in America.

His message of kindness has already reached hundreds on central Indiana. In March Owen and Alli spoke to a group of 5th graders in Avon and challenged them to do a random act of kindness. The pair says thank-you letters in response have been humbling.

“The letters we’ve gotten from that have literally brought me to tears more than once,” said Louthain.

You can follow Owen Mahan’s 500 Festival Mini Marathon journey and more on his Facebook page, If Owen Can We Can.