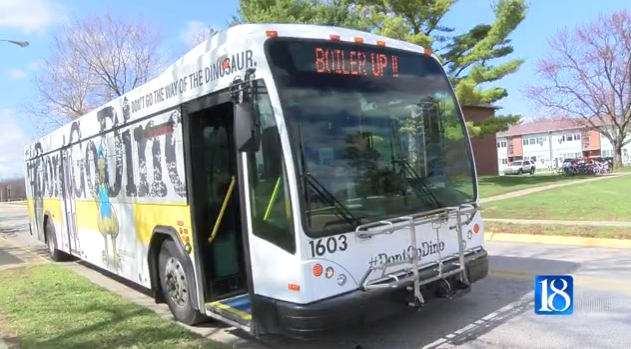 LAFAYETTE, Ind. (WLFI) – It happens every single day – pedestrians walking across Purdue’s busy streets with their eyes glued to their phones. Now, a Lafayette CityBus driver is asking for help to keep people from distracted walking.

The numbers of distracted pedestrians spotted on Purdue’s campus Monday continued to increase with each minute.

“Frightening from my standpoint,” said Rick Moschinger, a CityBus driver of ten years.

“I love working on a campus,” he said. “You take a day, like last week, where it’s like 60-70 degrees and the life around here. In my old age, it’s just catchy to watch everybody out there playing Frisbee, ball, just wandering around.”

But what he doesn’t love is when those wanderers are attached to their phones.

“I have had cases where students have walked right out in front of the bus where I have had to break fairly hard,” Moschinger said.

WLFI asked a Purdue student, “How often do you see people walking and texting?”

“I see people all the time,” Ashley Lynch replied.

She notices it more now because she used to be one of them.

“And then I did almost personally get hit by a bus, so I stopped doing that,” said Lynch.

“Honestly, the grim truth is it would probably take somebody getting hurt on campus,” said Lynch.

“I have seen close calls. I had one last week on Tower Acres,” Moschinger said.

He said a lot of people will get off his bus and try to walk in front of it to cross the street.

“I even had an announcement put in to make sure that they wait for me to clear,” Moschinger said.

He isn’t worried he will hit them, he’s worried other vehicles will try to pass without waiting to look for pedestrians.

“And we’re not regulated the same way,” Moschinger said. “So people pass us all the time.”

He tries to spread the word as best as he can, but he hopes others will join him.

“We need to continue to work as a team, and I’ll pay attention to you out there and you pay attention to us,” Moschinger said. “And we’ll all get by very safely and keep this a safe campus.”

CityBus currently has an awareness campaign that is using #DontGoDino.