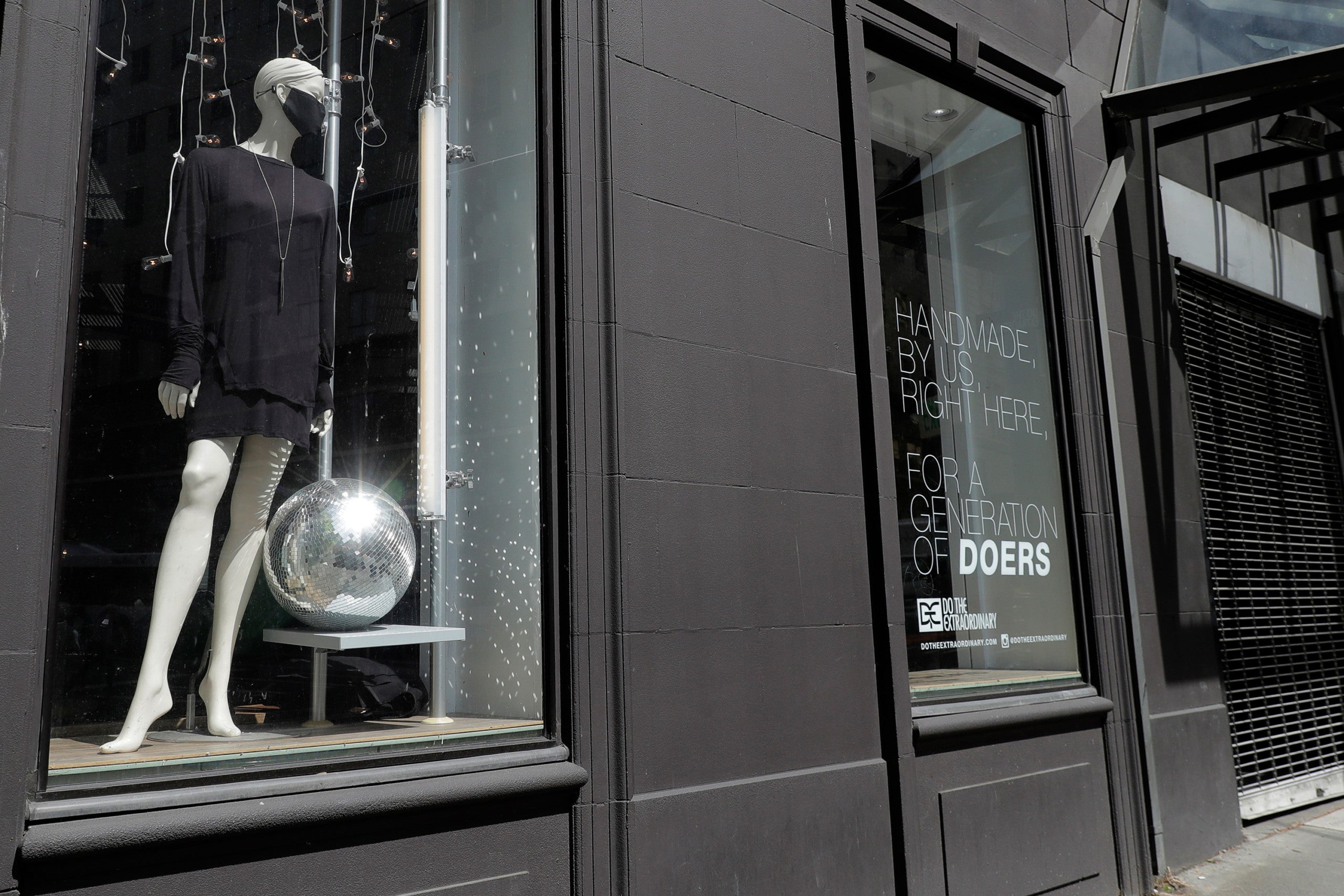 In this May 6, 2020 photo, a mannequin wears a mask in the window of the Do the Extraordinary clothing and accessories store in downtown Seattle, which is closed. Nearly all retail stores and restaurants in the area are currently closed or operating under reduced levels of service due to the outbreak of the coronavirus and state-wide stay-at-home orders, which has led to thousands of workers losing their jobs or being furloughed. (AP Photo/Ted S. Warren)
by: Anneken Tappe and Nathaniel Meyersohn, CNN
Posted: May 15, 2020 / 10:12 AM EST / Updated: May 15, 2020 / 10:12 AM EST

An advance reading from the Census Bureau showed US retail sales plummeted by 16.4% from the prior month in April, the largest since this data series began in 1992. It’s also significantly worse than the revised 8.3% sales drop in March.

As people continue to stay at home across much of the country, they’re spending more on food than before but little on other things. And with mass layoffs leaving millions of Americans out of work, discretionary spending has been crunched.

Excluding autos, the overall drop in retail sales was even steeper at 17.2%. Many Americans are putting big purchases like cars on the backburner.

Particularly weak were sales at clothing and accessories stores, which were down a whopping 78.8% from the prior month and 89.3% year-over-year in April.

“The shutdown of most physical apparel stores, plus the sharp decline in outfits needed for work and leisure, contributed to the precipitous drop,” said Neil Saunders, managing director of GlobalData Retail.

And online sales grew by 8.4% between March and April, as online shopping for essentials continues to boost companies like Amazon.

But retailers have been forced to shutter hundreds of thousands of stores during the crisis. Several have filed for bankruptcy in recent weeks, including Neiman Marcus and J.Crew. JCPenney is expected to file for bankruptcy in the coming days.

While April was likely the trough for the retail sector, and May will show some improvements as states are beginning to reopen, it will still be a tough year for the industry, Saunders said.

“Retail’s recovery will be slow and, in our view, it won’t be until 2021 before trade starts to return to more normal patterns,” he said.

The combination of soaring unemployment numbers and frail consumer confidence will weigh on retail and consumer spending in the near term, said economists at Oxford Economics in emailed comments.

Some chains, however, have bucked the trend for now.

Walmart, Target, Kroger and others are seeing sales increases, as they benefit from Americans buying more groceries and home essentials as they are sheltering in place.

In the long term, analysts expect the crisis to further widen the gap between the industry’s winners and losers.