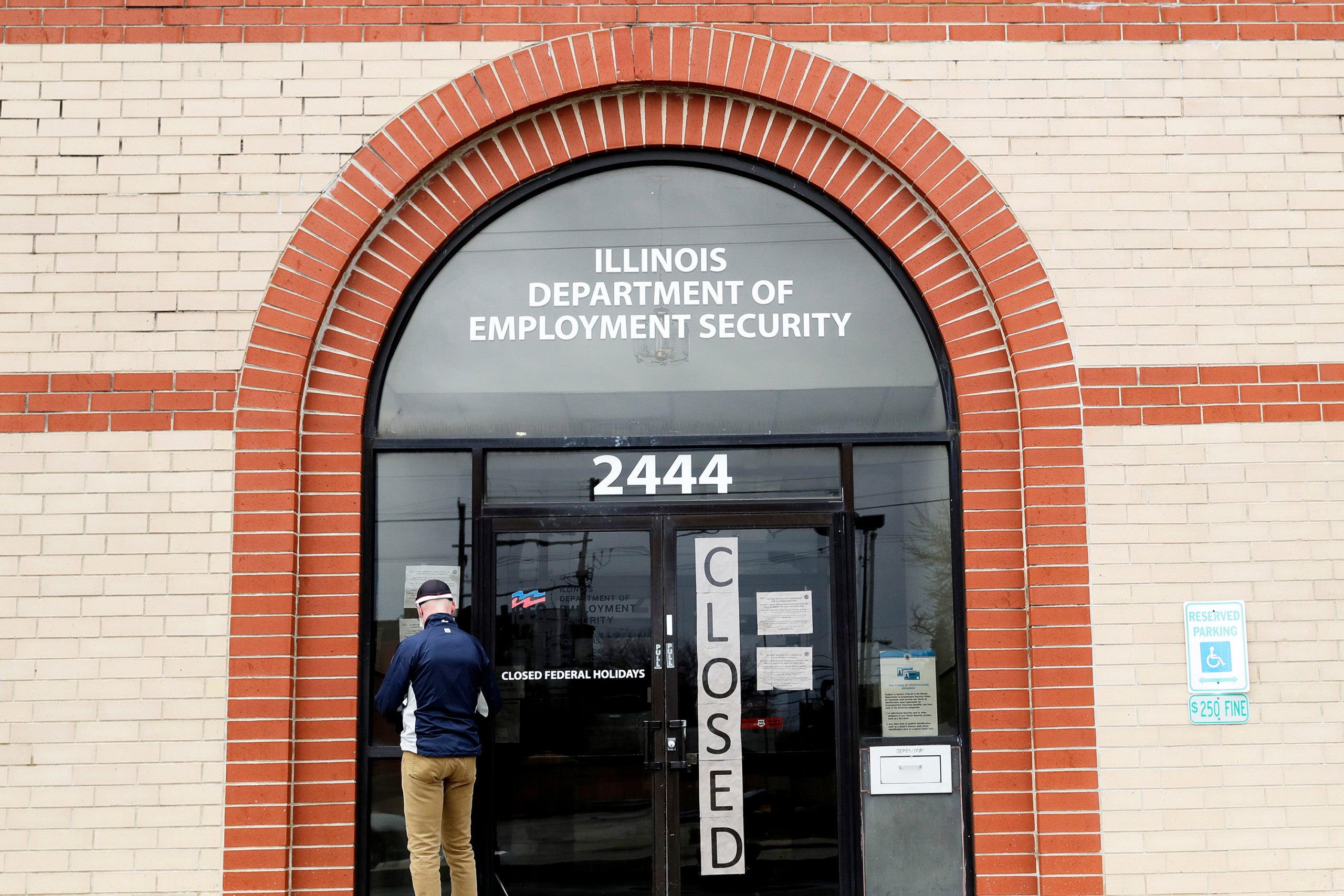 A man checks information in front of Illinois Department of Employment Security in Chicago, Thursday, April 30, 2020. Another 3.8 million people filed claims for jobless benefits last week, according to the Labor Department. While that's down from the previous week's 4.4 million, a staggering 30.3 million have applied for unemployment in the six weeks since the coronavirus began taking a wrecking ball to the U.S. job market. (AP Photo/Nam Y. Huh)
by: Anneken Tappe, CNN Business
Posted: May 6, 2020 / 02:02 PM EST / Updated: May 6, 2020 / 02:02 PM EST

(CNN) — Millions of Americans who are out of work won’t need statistics to confirm what they already know: Their livelihoods have been hard hit by mass business closures during the coronavirus pandemic.

But the government’s official jobs report, released Friday, will give one of the most comprehensive overviews of that economic fallout. By all accounts, it’s expected to be a chilling report, showing layoffs surged and unemployment rose to Great Depression levels in April.

The report, which will be released by the Bureau of Labor Statistics on Friday at 8:30 am ET, will inform policymakers as they continue to respond to the crisis, and it will document how severely stay-at-home orders have hurt American workers.

Economists polled by Refinitiv expect the US economy shed 21.85 million jobs in April, by far the largest number on record. The US government’s monthly jobs data dates back to 1939.

Combined with job losses in March, April’s layoffs would wipe out all jobs gained over the past decade. Between March 2010 and February 2020, the US economy added 22.8 million jobs, according to the BLS.

Meanwhile, economists polled by Refinitivexpect the unemployment rate soared to 16%, the highest rate since the BLS started tracking monthly unemployment numbers in 1948. That’s a level of joblessness not seen since the Great Depression in the 1930s, for which the BLS estimates annual data.

Government economists estimate the unemployment rate peaked at 24.9% in 1933.

The unemployment rate climbed to 4.4% in March, which was already a stark increase from the near 50-year low of 3.5% in February, but nowhere near the the peak expected for this year.

White House economist Kevin Hassett predicts an unemployment rate of as much as 20% in April, he said Tuesday.

We won’t have a complete picture of just how bad the pandemic is for the job market until next month, said Marvin Loh, senior global macro strategist at State Street. Job growth will probably resume by Memorial Day as businesses in many parts of the United States start to reopen, noted Moody’s Analytics Chief Economist Mark Zandi in a research report this week.

Some states are already beginning to loosen restrictions, while others will take longer to open and rehire.

Economists also worry whether consumers will spend like they used to once the great reopening is under way. Consumer spending typically accounts for about two-thirds of US gross domestic product, the broadest measure of the American economy. A more cautious consumer who spends more time at home could leave the restaurant and entertainment sectors — and their labor forces — to recover more slowly, said David Kelly, chief global strategist at JPMorgan Funds.

The Covid-19 outbreak has torn through America over the past two months. People began working from home where possible in the second half of March, as businesses closed and schools suspended in-person teaching. As the lockdown dragged on, companies laid off and furloughed their staff.

A separate report, released by payroll processing firm ADP Wednesday, showed private employers cut 20.2 million jobs in April. Although the ADP report and BLS surveys are not directly linked, economists and investors look at the ADP survey as an indicator of what’s to come in the BLS jobs report.

Over the past few weeks, economists have anxiously tracked weekly jobless claims, which count people filing for first-time unemployment benefits. Since mid-March, the number has grown to 30.3 million, or about 18.6% of the March labor force.

Another 3 million initial claims are expected for the week ended May 2. The report is due at 8:30 am ET on Thursday.

Jobless claims don’t determine the official unemployment rate,however, which is based on a separate survey of about 70,000 households that ends about halfway through the month. But the explosion in claims indicates America’s labor market is in dire straits.

People are only counted as “unemployed” by the BLS when they have been out of work but available for a new job, as well as actively searching for one, in the prior four weeks.Or, if they were on “temporary layoff” with the expectation of being recalled to work within six months.

But in the current crisis, millions of jobless Americans won’t be looking for a new job, given business closures and stay-at-home orders.

This means plenty of laid-off people won’t be counted in the April unemployment rate.