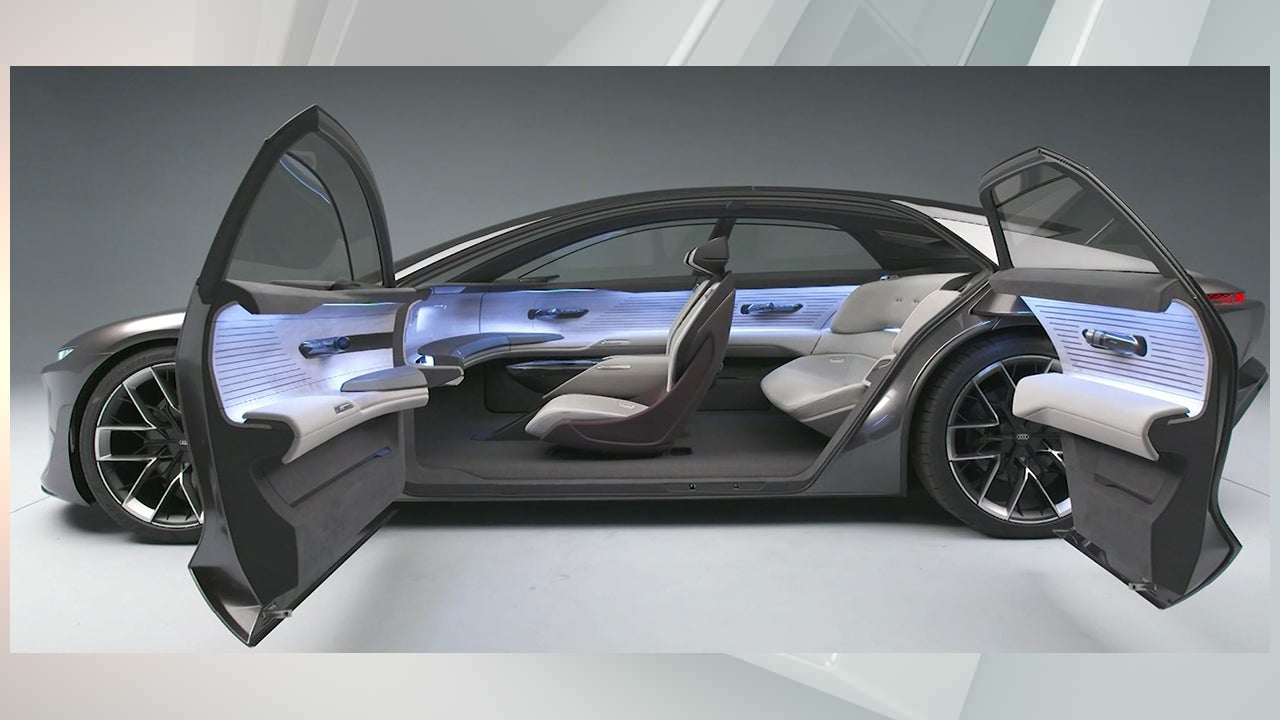 (CNN) — The Audi Grandsphere is the German automaker’s idea of what a self-driving luxury car could be, with controls that fold away and lounge-style seats in the front.

And while the engineers at Audi haven’t actually gotten the Grandsphere to drive itself yet, automotive interior designers are playing with the possibility.

Usually, in big, roomy luxury cars, the back seat is where you really want to be. Those are the seats that recline like those in a first-class airline cabin, and it’s where you might have access to a drinks cooler and glasses for refreshments. The front seats are nice, too, but not as much fun, because that’s where the serious business of driving takes place.

But there’s no need for pleasure to take a back seat in the Grandsphere. The steering wheel and pedals fold away into the dashboard and the floor when the conceptcar goes into “autonomous mode.”

Then the front seats can slide back and recline. To allow the maximum possible space for those front seats, the back seats are nearly nonexistent. There’s just a small two-seat bench in the back, which seems hardly luxurious at all.

The Grandsphere is about as long as an Audi A8L, Audi’s current long-wheelbase luxury car, but all that space is given over almost entirely to the comfort of two people and, perhaps, a couple of other less fortunate guests. The emphasis on the front seat comfort allowed designers to give the four-door Grandsphere the sloping shape of a two-door touring car.

Those two front occupants have access to a host of entertainment options. Between the seats, where most cars have a center storage console, there’s a cooler for drinks and storage for glasses.

The dashboard is made of light colored wood with no glass screens. In the car’s “human-driven mode,” gauges are projected onto the surface. When gauges aren’t needed, videos or reading material can be projected instead for the amusement of the driver and passenger. Otherwise, pleasant abstract designs can fill the empty space on the dashboard. Meanwhile, back seat passengers can enjoy a potted plant growing just behind the front seats.

The Grandsphere is an electric car with one electric motor driving the front wheels and another the back, giving the car all-wheel-drive. Without space needed for a big gasoline engine or transmission, the cabin of the car extends far to the front of the vehicle, providing ample interior space.

Besides technological advances needed to provide for true self-driving, a car like Grandsphere would also require regulatory changes allowing the steering wheel and pedals to be out of the driver’s reach.

The concept for the Grandsphere was revealed Wednesday.