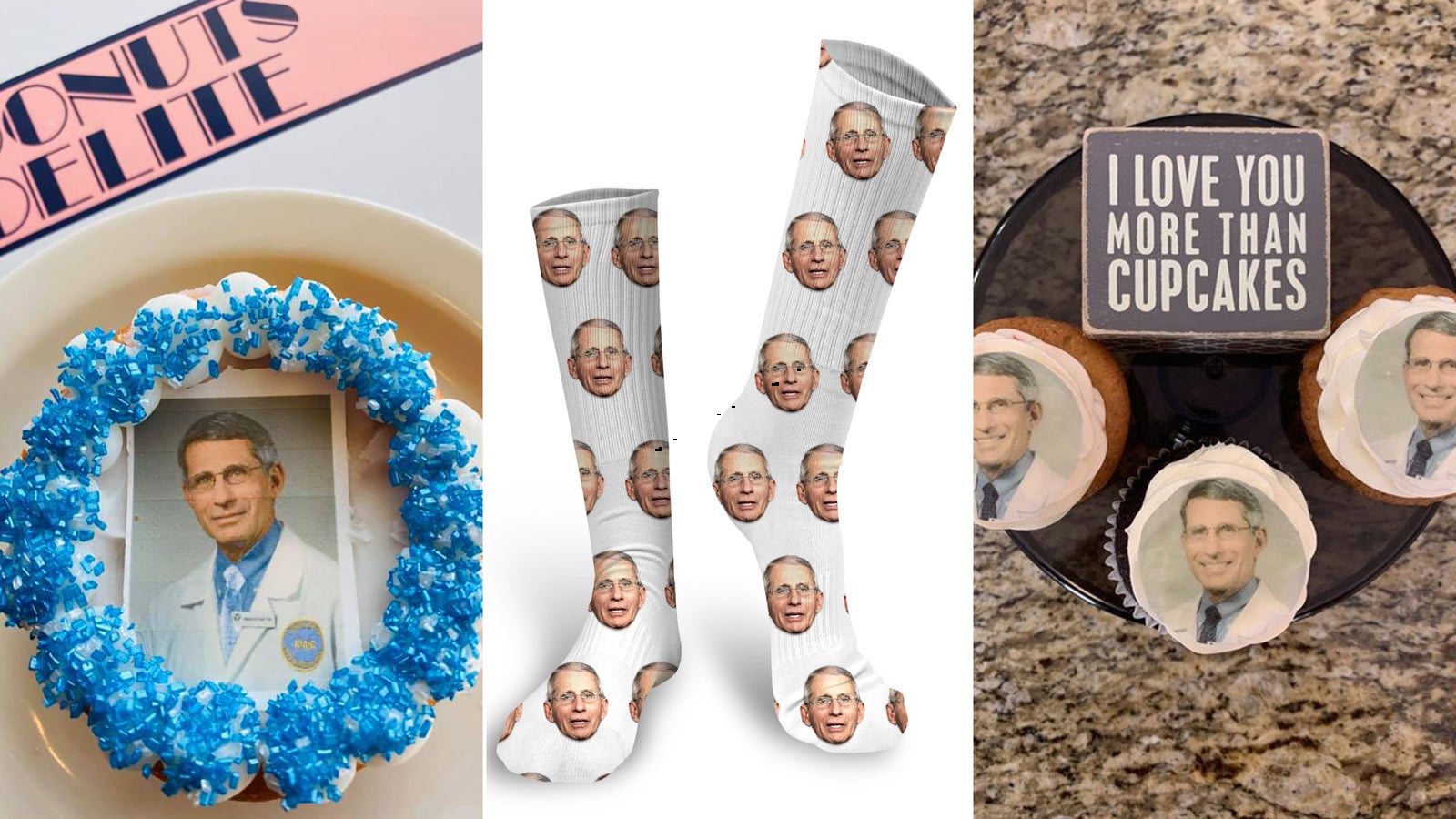 (CNN) — Not all heroes wear capes — but some of them do wear stethoscopes.

Dr. Anthony Fauci, director of the National Institute of Allergy and Infectious Diseases, has long been celebrated in the medical world.

Now, because of his work as a key member of the White House’s coronavirus task force, he’s grown into an overnight celebrity with a large fanbase.

Recognizing Fauci’s newfound popularity, businesses across the country are plastering the doctor on their products.

Here are some of the many places you can find the veteran doctor’s face:

The only thing better than a cupcake is a cupcake with someone’s face on it.

Melt-In Your Mouth, a bakery in North Carolina, is now selling cupcakes featuring Fauci’s face — and the treats are helping keep the business afloat amid the coronavirus pandemic.

“We came up with the idea because he’s (Fauci) been a steady voice throughout this whole process,” Michael Chambers, co-owner of Melt-In Your Mouth, told CNN. “We were also trying to find a way to boost sales so we wouldn’t have to lay off too many employees.”

“We didn’t expect it to be as popular as it has been,” Chambers said. “It actually helped us keep more employees than we thought we could.”

People across the US have started reaching out to the business to request sweets with other familiar faces, such as CNN anchor Chris Cuomo and his brother, New York Gov. Andrew Cuomo.

Donuts Delite, a doughnut shop in Rochester, New York, has also seen a demand for its donuts featuring Fauci’s face.

The business, which prints Fauci’s face on edible paper and places it atop buttercream-frosted doughnuts, said it began selling the special donuts to “cheer up” people in the neighborhood.

Turns out, the sweet treats have cheered up thousands across the country, who continue to order these doughnuts from the business.

“We noticed Dr. Fauci on, and we loved his message and how thorough he was, and how he kept everyone informed during the crisis… so we wanted to give back and say thanks,” Nick Semeraro told CNN in a recent interview.

For Fauci fans who aren’t into sweets, there’s no shortage of themed swag.

“As someone living with HIV, I greatly admire and appreciate all the work he has done to further research in that field,” Scott Christopher, who sells Dr. Anthony Fauci Prayer Candles on his Etsy shop, told CNN.

Since listing the candles, Christopher said the shop has been doing “remarkably well.” He said he has sold almost 100 Fauci candles in less than a week.

“During the pandemic, he has been a voice of reason and comfort,” Christopher said. “And I think that’s what I and so many others have responded to.”

Custom Face Designs, a company that sells customized items like shirts and blankets, has a new best seller: socks with Fauci’s face all over them.

“I am making them because I love Dr. Fauci,” Jermaine Cooper, one of Custom Face Designs’ owners, told CNN. “And he is a sign of hope for all of us and a trusted adviser.”

The family business has sold nearly 100 pairs of the socks in just two days, and Cooper said he expects the item to continue selling well.