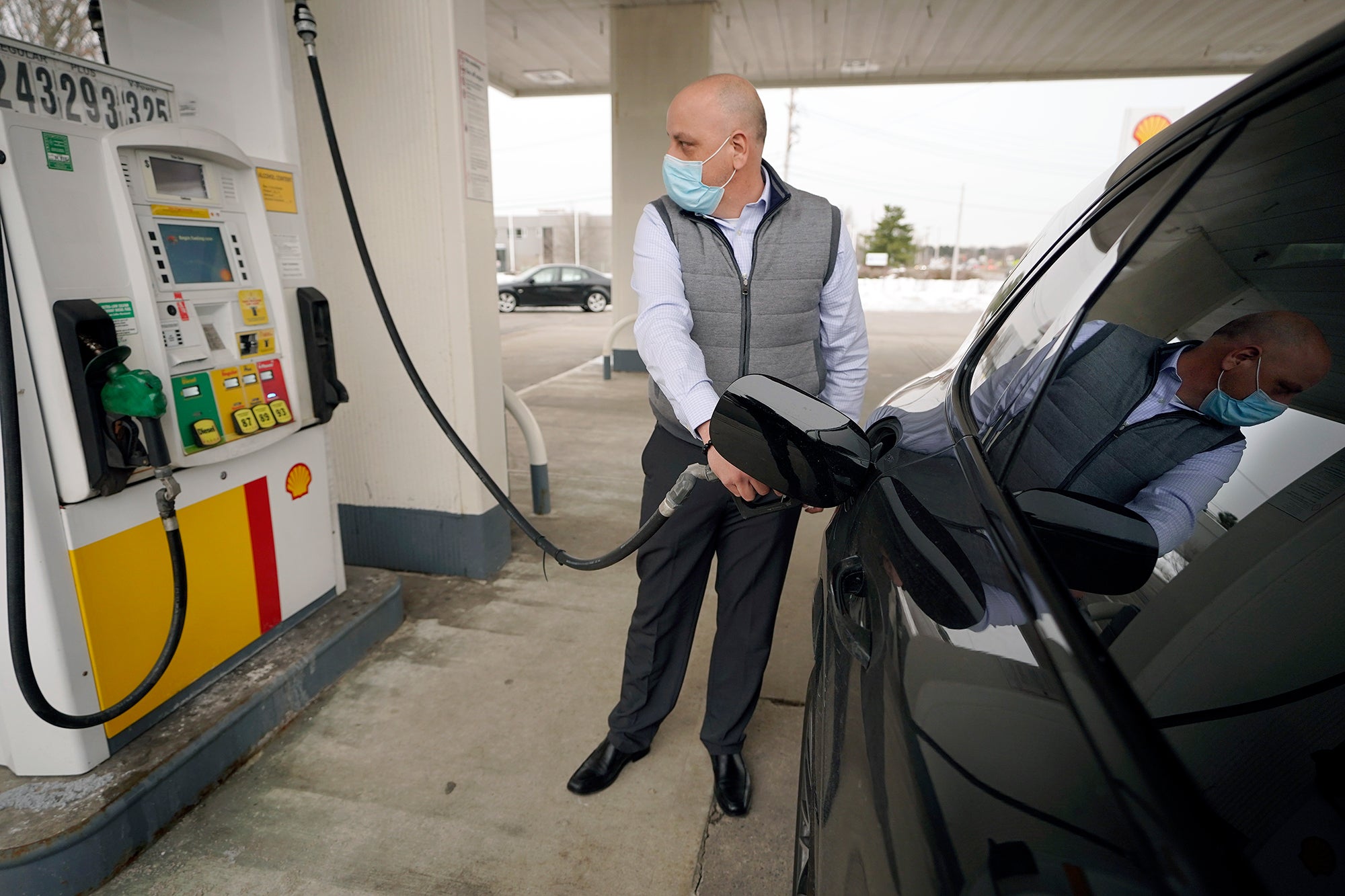 FILE - In this Thursday, Feb. 18, 2021 file photo, Jeremy Heskett, of Boston, pumps gasoline at a Shell gas station, in Westwood, Mass. U.S. consumer prices increased 0.4% in February, the biggest increase in six months, led by a sharp jump in gasoline prices. The Labor Department said Wednesday, March 10 that the February advance in its consumer price index followed a 0.3% rise in January and was the largest advance since a similar 0.4% increase in August. (AP Photo/Steven Senne, File)
by: Matt Egan, CNN Business
Posted: Mar 23, 2021 / 08:57 AM EST / Updated: Mar 23, 2021 / 08:57 AM EST

(CNN) — Travel-starved Americans emerging from lockdown may need to budget for $3-a-gallon gasoline on their next road trip.

Prices at the pump are on the rise, driven higher by oil prices hitting $60 per barrel, a surge of economic optimism, restraint from US frackers and unprecedented production cuts by OPEC and Russia. The energy rally has been further boosted by predictions on Wall Street of a new oil “supercycle.”

The national average price of gasoline has climbed 47 straight days to nearly $2.89 per gallon, according to AAA. US drivers haven’t experienced a $3 average price per gallon since 2014, though it came close in 2018 and 2019.

“$3 gas will be the norm by Memorial Day,” said Robert Yawger, director of energy futures at Mizuho Securities. “We’ve been trapped inside for a year. People want to get out of the house.”

Some states are already dealing with $3 gas, including Pennsylvania, Illinois, Arizona, Utah, Nevada and California.

The pain at the pump could cause political problems for the White House. President Joe Biden took swift action this winter to respond to the climate crisis by cracking down on the fossil fuels industry.

That has led some critics to try to pin the “blame” for higher gas prices on Biden — even though energy industry insiders say the increase really is not about federal policy.

“Make no mistake, prices would have gone up no matter who was in the White House,” said Patrick De Haan, head of petroleum analysis at GasBuddy. “This is more about economic recovery.”

After getting crushed by Covid in 2020, the oil market has been one of the biggest winners of the reopening surge on Wall Street. US crude hit a pandemic high of $66.09 a barrel on March 5, an incredible rebound from the April 2020 low of negative $37 a barrel.

OPEC and Russia gave the oil rally a turbo boost earlier this month, shocking the market with a decision to extend their dramatic production cuts for at least another month.

The V-shaped recovery in the oil sector did run into trouble last week. US crude tumbled 6% to $61.42 a barrel on worries over the rocky rollout of vaccines in Europe.

But Goldman Sachs is predicting the oil rally will return as demand accelerates. The investment bank expects Brent crude, the world benchmark, to rise from just $65 today to $80 by the summer.

“We view the recent sell-off as a transient pullback in an otherwise large oil price rally and a buying opportunity,” Damien Courvalin, Goldman’s head of energy research, wrote in a report to clients last week.

“There is a little more cabin fever this spring,” De Haan said. “The overwhelming odds are that we will at some point see the national average touch the $3 mark.”

Beyond the desire to take road trips, the energy market is being helped by subdued US supply. The pandemic dealt a crushing blow to the US oil boom, with frackers drastically cutting production to stay alive.

Even with US crude above $60 a barrel, the nation is only producing about 10.9 million barrels of oil per day, according to estimates from the federal government. That’s down by a staggering 2.2 million daily barrels from the same period in 2020.

Of course, that also means US producers have the ability to pump a lot more if prices get too high.

Tom Kloza, global head of energy analysis at the Oil Price Information Service, doesn’t think the national average will hit $3 a gallon this year because of high unemployment, remote work and reduced travel to major sporting and entertainment events.

Regardless, higher gas prices will feed the narrative that Biden’s energy policies will hit US consumers in the wallet. On the campaign trail, Biden had to repeatedly deny claims from his opponent that he would ban fracking.

But Biden did move quickly to address the climate crisis. On his first day in office, he rescinded the Keystone XL Pipeline, placed a temporary moratorium on oil and gas leasing in the Arctic and moved to rejoin the Paris Agreement on climate change.

In late January, Biden also imposed a 60-day suspension of new oil and gas leasing and drilling permits on federal lands unless the Interior Department’s leaders approve them. Critically, that policy only applied to new leases and permits, not existing ones. Much to the dismay of climate activists, the Interior Department said earlier this month that the 60-day suspension will not be renewed.

“Some blame is being laid on Biden and the Keystone Pipeline but that has absolutely nothing to do with the price of crude or gasoline this year,” Kloza said.

$4 gas could speed up the EV boom

Of course, if Biden does take action to severely constrain US production, that could eventually lead to higher oil prices down the line.

Prices are probably not at the level yet where they would eat into demand by causing drivers to cancel road trips. And it’s not clear what that tipping point would be given the excitement about reopening after the pandemic.

“$3 gas isn’t going to scare anyone away,” said De Haan. “People are not going to hold back this summer. They are finally starting to feel better.”

Bigger picture, the oil industry doesn’t want to see prices spike too high because that would only accelerate the shift to electric vehicles.

“You don’t want to go there,” said Mizuho’s Yawger. “You will kill the golden goose.”