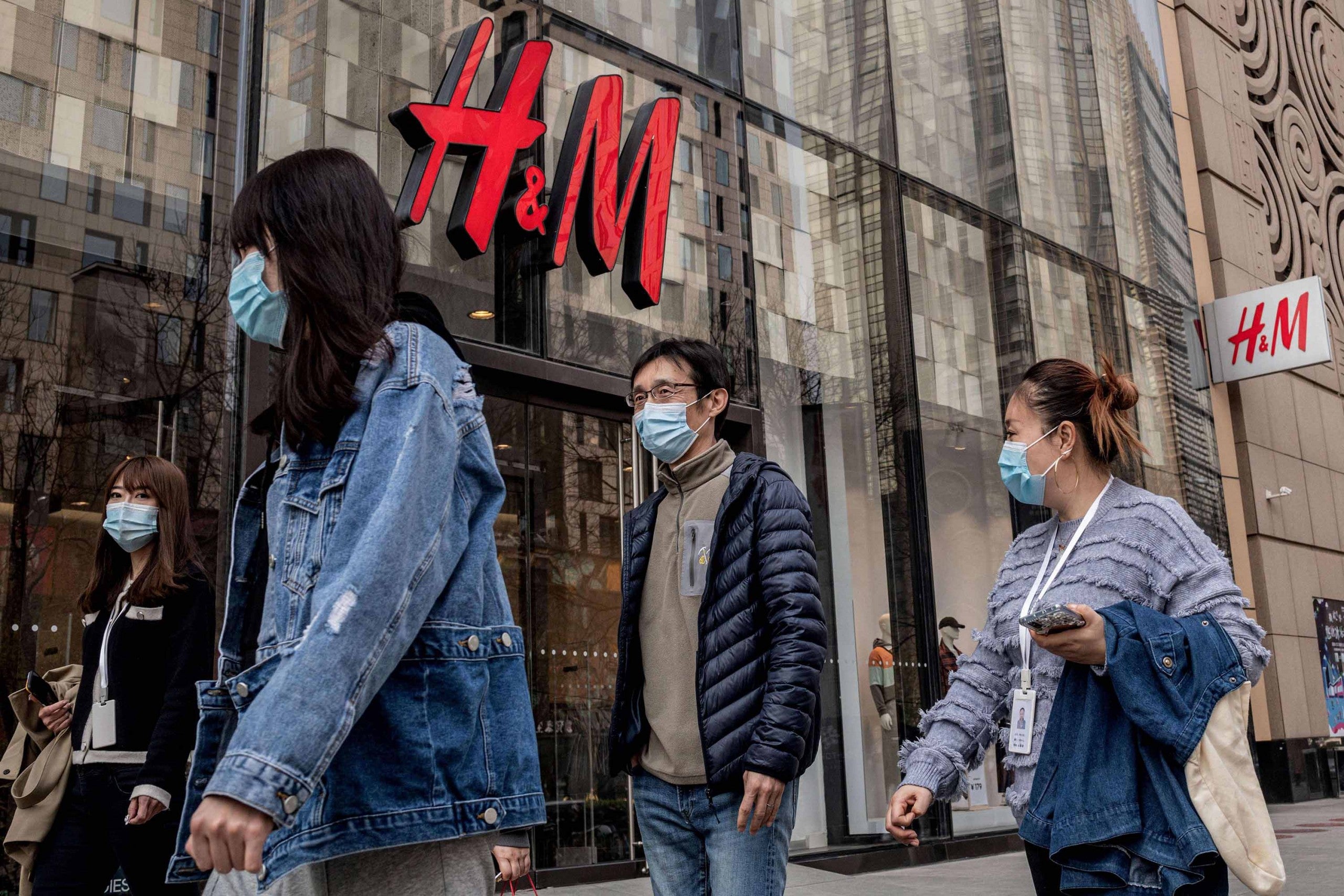 (CNN) — H&M, Nike and other big Western apparel brands are facing a boycott in China because of the stand they’ve taken against the alleged use of forced labor to produce cotton in the country’s western region of Xinjiang.

H&M and Nike said months ago they were concerned about allegations forced labor has been used to produce cotton in Xinjiang, but they’ve now been caught in an escalating firestorm that has erupted on Chinese social media this week.

Swedish multinational H&M, the world’s second-largest clothing retailer, has been pulled from major e-commerce stores in China and blocked by several major navigation, review and rating apps. Videos are circulating on social media that a shopping mall in Chengdu, Sichuan province has removed H&M’s advertising sign outside the mall.

Nike and Adidas, among other brands, have also faced heavy criticism. Communist Party mouthpiece People’s Daily on Thursday named the two firms along with Burberry, New Balance, and other members of the Better Cotton Initiative (BCI) that have expressed concerns about cotton produced in Xinjiang. The paper then called for broad boycotts of the brands.

Dozens of Chinese celebrities have terminated contracts or said they would cut ties with these brands, including Nike, Adidas, Puma, Converse, Calvin Klein, Tommy Hilfiger, and Uniqlo — a move lauded by state media. And Honor of Kings, Tencent’s smash-hit video game, is ending a partnership with Burberry and removingitstartan design from characters’ outfits.

The outrage comes after a group linked to the ruling Communist Party posted a statement from H&M about Xinjiang on Chinese social media site Weibo. In the statement, released in September, H&M said it was “deeply concerned” over reports of forced labor in the production of cotton in Xinjiang.

Human rights groups have repeatedly accused Beijing of detaining Uyghurs and other Muslim minority groups in the region in “re-education” camps and using them as forced labor, which they claim is part of global tech and retail supply chains, either directly or indirectly.

Recent sanctions from the United States and other Western countries over Xinjiang have sparked a renewed pushback from the Chinese government, which calls the camps “vocational training centers” designed to combat poverty and religious extremism.

“Spreading rumors to boycott Xinjiang cotton, while trying to make a profit in China? Wishful thinking!” the post said.

H&M faced a barrage of criticism from Chinese social media users, while Weibo posts containing the hashtag “I support Xinjiang cotton” racked up more than 4 billion views. “H&M clothes are rags,” one of the most-liked Weibo comments said. “They don’t deserve our Xinjiang cotton!”

Chinese e-commerce giants Alibaba and JD.com even removed all H&M products from sale following the backlash.

People’s Daily voiced its outrage at H&M, saying on its official Weibo account: “China’s Xinjiang cotton is white and flawless.” State broadcaster CCTV accused foreign brands of “earning big profits in China but attacking the country with lies at the same time.”

Actor Huang Xuan and actress Song Qian, brand ambassadors for H&M since last year, said separately they would no longer work with the company.

In a statement posted Wednesday on Weibo, H&M said it has always maintained high standards and transparency in its global supply chain.

“[This] does not represent any political position … H&M Group always respects Chinese consumers. We are committed to long-term investment and development in China,” the statement said. The company added it was working with “more than 350 manufacturers” in China. H&M declined a request from CNN Business for additional comment.

Within hours, the criticism had spread to Nike. The company had said nearly a year ago it was “concerned about reports of forced labor in, and connected to, Xinjiang.”

“Nike does not source products from [Xinjiang] and we have confirmed with our contract suppliers that they are not using textiles or spun yarn from the region,” the statement said.

Soon after the Nike statement began circulating on Weibo this week, Chinese singer and actor Wang Yibo said he had cut ties with the US company and “firmly opposes any remarks and actions that smear China.” Nike did not respond to a request from CNN Business for comment.

Over the past year, a number of Western companies have said they will examine their global supply chains to ensure they are free from Xinjiang cotton products after allegations of forced labor involving the region’s Muslim Uyghur people.

In December, the US government said it would block all imports of cotton from Xinjiang over concerns they “may have been made by slave labor in some of the most egregious human rights violations existing today.”

In the past week, the US, UK and European Union have all put in place new sanctions on Chinese officials over their role in alleged human rights abuses in Xinjiang. Bejing countered with its own measures, saying its Western critics were “maliciously spreading lies.”

Meanwhile, as the social media backlash now spreads to other major Western brands, some companies in China have begun to prominently advertise their use of cotton made in Xinjiang. Chinese brand Anta Sports said in a statement it would continue to use cotton from Xinjiang, while Japanese retailer Muji began to advertise products made with “Xinjiang cotton.”

FILA China, which Anta Sports acquired from Italian brand FILA in 2009, also announced late Thursday it has been using cotton produced in China, including Xinjiang, and had started the procedure to withdraw from BCI.

Some Chinese web users even praised California-based footwear brand Skechers for a recent statement on Uyghur workers, which said its internal audits found no evidence its Chinese supplier had used “forced labor.”

— CNN’s Beijing bureau and Hanna Ziady contributed to this article.