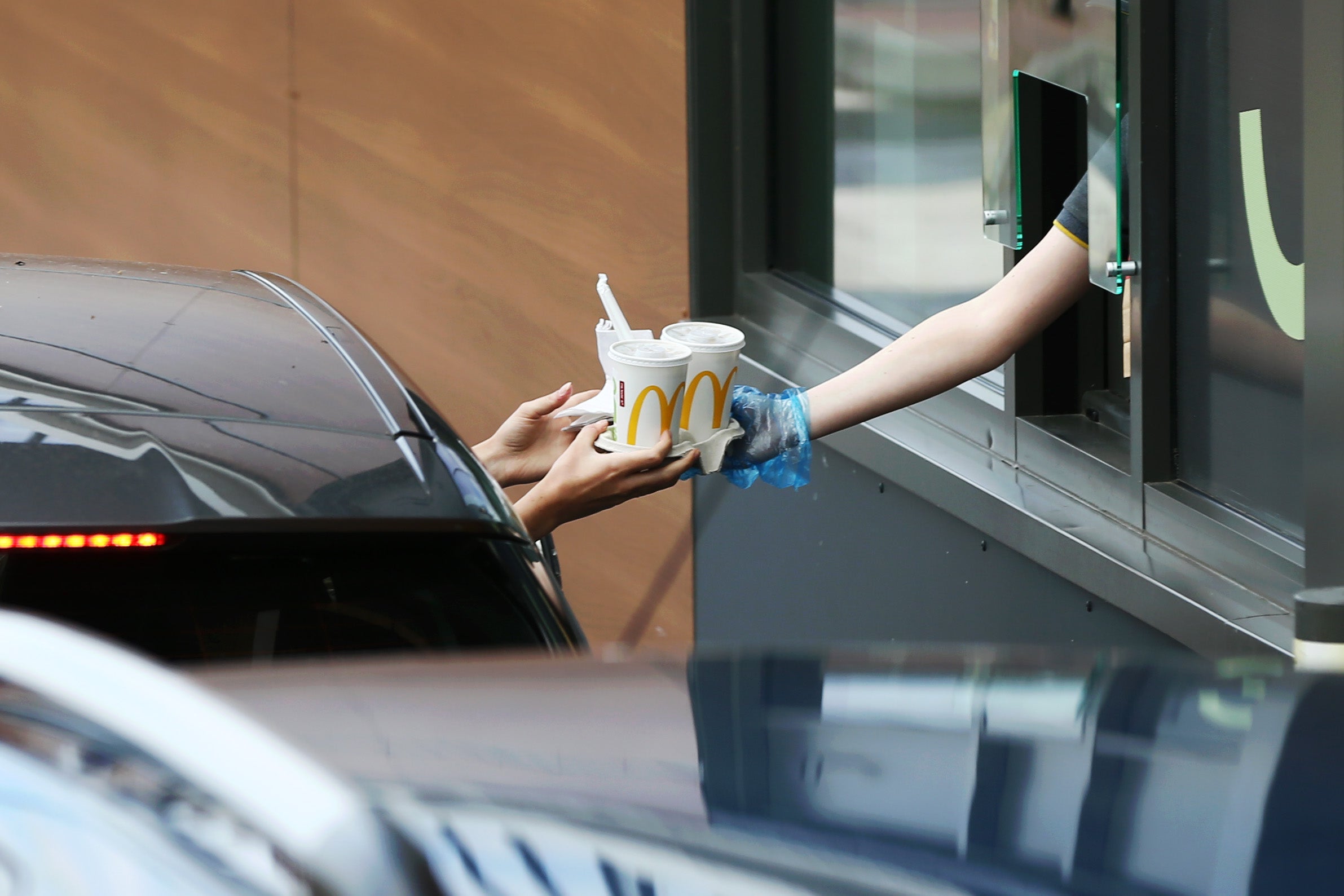 STOURBRIDGE, ENGLAND - JUNE 04: A person takes their food at a Drive Thru McDonald's on June 04, 2020 in Stourbridge, England. The British government further relaxed Covid-19 quarantine measures in England this week, allowing groups of six people from different households to meet in parks and gardens, subject to social distancing rules. Many schools also reopened and vulnerable people who are shielding in their homes are allowed to go outside again. (Photo by Cameron Smith/Getty Images)
by: Danielle Wiener-Bronner, CNN Business
Posted: Nov 9, 2020 / 04:14 PM EST / Updated: Nov 10, 2020 / 08:06 AM EST

(CNN) — Would anyone eat a burger called McPlant? McDonald’s is about to find out.

The company said Monday that it will test the new plant-based burger in key markets next year.

After testing a plant-based burger in some international markets, “we have created a delicious burger that will be the first menu option in a plant-based platform,” said Ian Borden, president of McDonald’s International. He added that the McPlant line could eventually include plant-based chicken and breakfast sandwiches, too.

The company joins other fast food chains like Burger King and Dunkin’ in getting in on the plant-based trend. Last year, it began testing a burger in Canada made with patties from Beyond Meat, a seller of meatless products.

McDonald’s said that it will make its own plant-based products. Shares of Beyond Meat fell about 8% following the news. Beyond plans to report earnings after the bell on Monday.

McDonald’s isn’t just going all in on meat substitutes, though.

In addition to the “McPlant” line, McDonald’s said in a strategy update to investors that it would capitalize on consumer trends that strengthened during the pandemic — like eating comfort food. That means focusing on its most popular menu items and selling more chicken

“Demand for the familiar in these uncertain times is more important than ever,” McDonald’s said in its investor update, adding that it expects core menu items like its Big Mac and Quarter Pounder burgers, Chicken McNuggets and french fries to contribute to its growth moving forward.

To further promote sales of these items, McDonald’s is rolling out improvements, like new, toasty buns and an “enhanced grilling approach” for hamburgers, as well as more chicken flavors and menu items.

Already, McDonald’s has seen success with its spicy chicken nuggets, which launched in September and helped boost sales that month.

A new chicken sandwich should help give McDonald’s “credibility” in the chicken space, said Joe Erlinger, president of McDonald’s USA.

“We want customers to choose McDonald’s for chicken,” he said.

That’s not all. McDonald’s is introducing new packaging with a “modern, refreshing feel.” The company is rolling the new packaging out globally over the next few years.

And it’s taking cues from another pandemic-induced trend — eating at home instead of at restaurants.

Digital delivery, drive-thru and pickup ordershave been essential for restaurants during the pandemic, and many chains, including Burger King, Popeyes and Taco Bell are exploring new store formats and investing in drive-thru improvements. McDonald’s is no exception.

The burger chain is planning to make it easier for customers to eat at home by letting more people order delivery through the McDonald’s app and improving the speed and accuracy of delivery orders. It will also try out new concepts at its drive-thrus, like automated order taking, andexpress pickup lanes for people who placed digital orders. And it will test out restaurants with drive-thrus that are only open for delivery and pickup orders.

Plus, it’s launching a new digital hub called “MyMcDonald’s,” which will include a new loyalty program that will be piloted in Phoenix in the coming weeks.

The company has been investing in its technology for some time — it bought Dynamic Yield, an artificial intelligence company, to help it roll out smart menu boards last year. It has also purchased Apprente, another AI company that works on voice-based ordering platforms. Apprente should help automate McDonald’s drive-thru.

McDonald’s suffered early in the pandemic, but its sales have been improving.