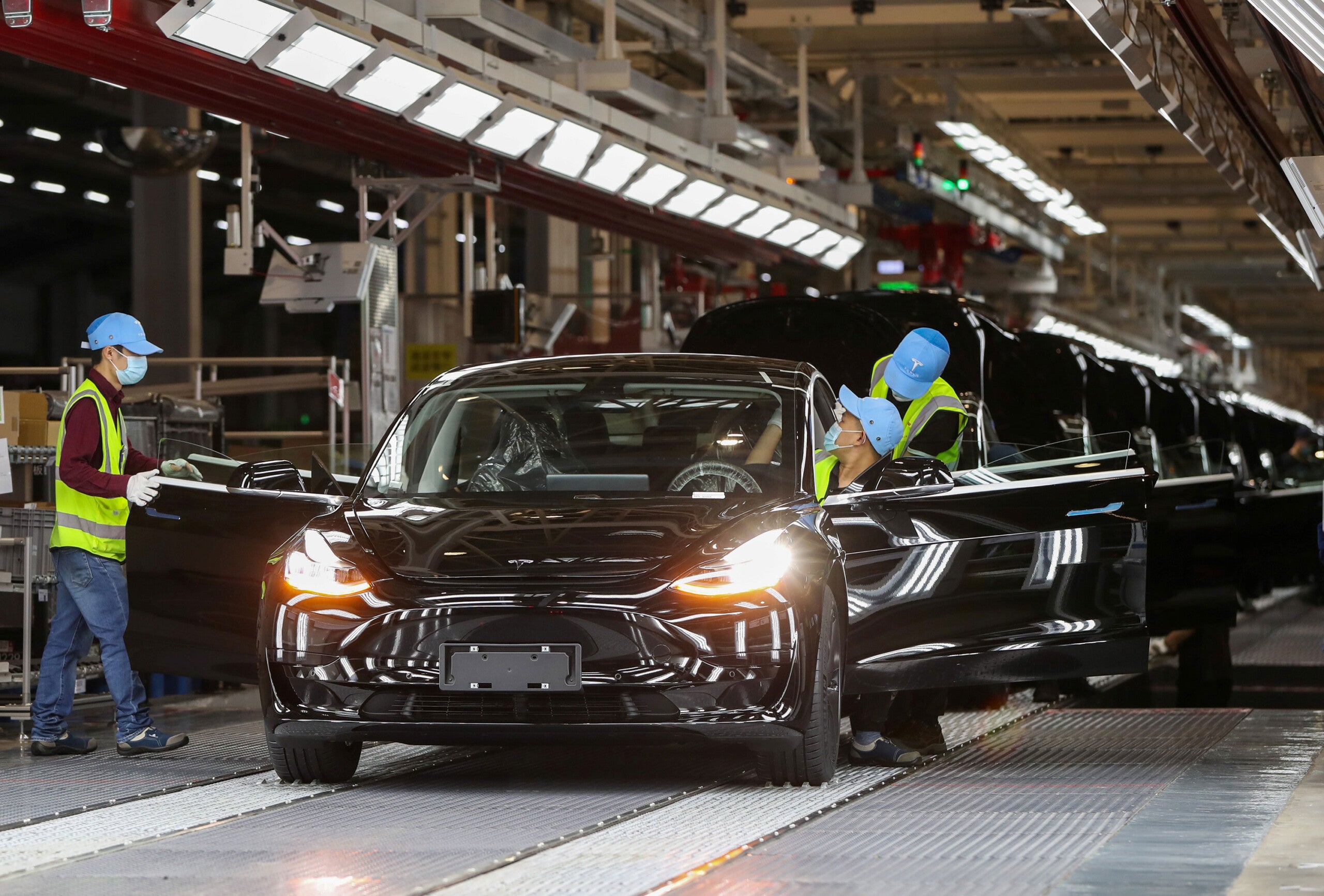 SHANGHAI, Nov. 20, 2020 -- Employees work at the Tesla Gigafactory in Shanghai, east China, Nov. 20, 2020. U.S. electric car company Tesla in 2019 built its first Gigafactory outside the United States in the new Lingang area, with a designed annual production capacity of 500,000 units. The Tesla Shanghai Gigafactory broke ground in early 2019 and delivered its first batch of made-in-China Model 3 sedans one year later. With the second-phase project of its gigafactory under construction, Tesla expects to start the mass production of made-in-China Model Y vehicles in the first half of 2021. (Photo by Ding Ting/Xinhua via Getty) (Xinhua/Ding Ting via Getty Images)
by: Chris Isidore, CNN Business
Posted: Jan 2, 2021 / 02:38 PM EST / Updated: Jan 2, 2021 / 02:38 PM EST

(CNN) — Tesla hit its goal of building a half-million cars in 2020, a first for the company, it reported Saturday.

The completed deliveries to customers, which is slightly different from the production figure, fell just short of that same goal as it delivered 499,550 cars. That sales total rounds up to the 500,000 target, though.

The full-year production and deliveries rose by more than a third from 2019 levels, an impressive gain, especially considering that the company’s major factory in Fremont, California, was shut for nearly two months from mid-March to early May by COVID-19 stay-at-home orders. A global recession caused by the pandemic also cut into worldwide auto sales. Tesla’s new plant in Shanghai, which opened in late 2019, was a key element of its increased production and sales.

The company produced 179,757 cars in the fourth quarter, up 71% from a year earlier, and it delivered 180,570, a 61% jump. The company has even more ambitious plans to increase production, with plants under construction and expected to open this year outside Berlin, Germany, and Austin, Texas. Tesla is also set to start selling cars in India in 2021.

The company’s impressive sales growth is nothing compared to the rise in the Tesla share price, which soared 743% for the year. The company’s 2019 and 2020 results proved it could be consistently profitable, and its forecast of greater sales and profits in the future, helped to fuel the stock rise.

Other automakers are due to report US sales totals on Tuesday, and global sales totals for 2020 later in the month. But most are expected to report a drop in sales due to the impact of the recession and pandemic.

Impressive as Tesla’s sales numbers may be, they are dwarfed by established automakers. Volkswagen, the world’s largest automaker, sold just under 11 million cars worldwide in 2019. General Motors, the largest US automaker, had global sales of 7.7 million cars in 2019.

Tesla’s stock rise over the last 18 months has made it the most valuable automaker in the world. Its current market cap is worth roughly the combined value of the next eight most valuable global automakers — Toyota, Volkswagen, Daimler, GM, BMW, Honda, Hyundai and Ford.