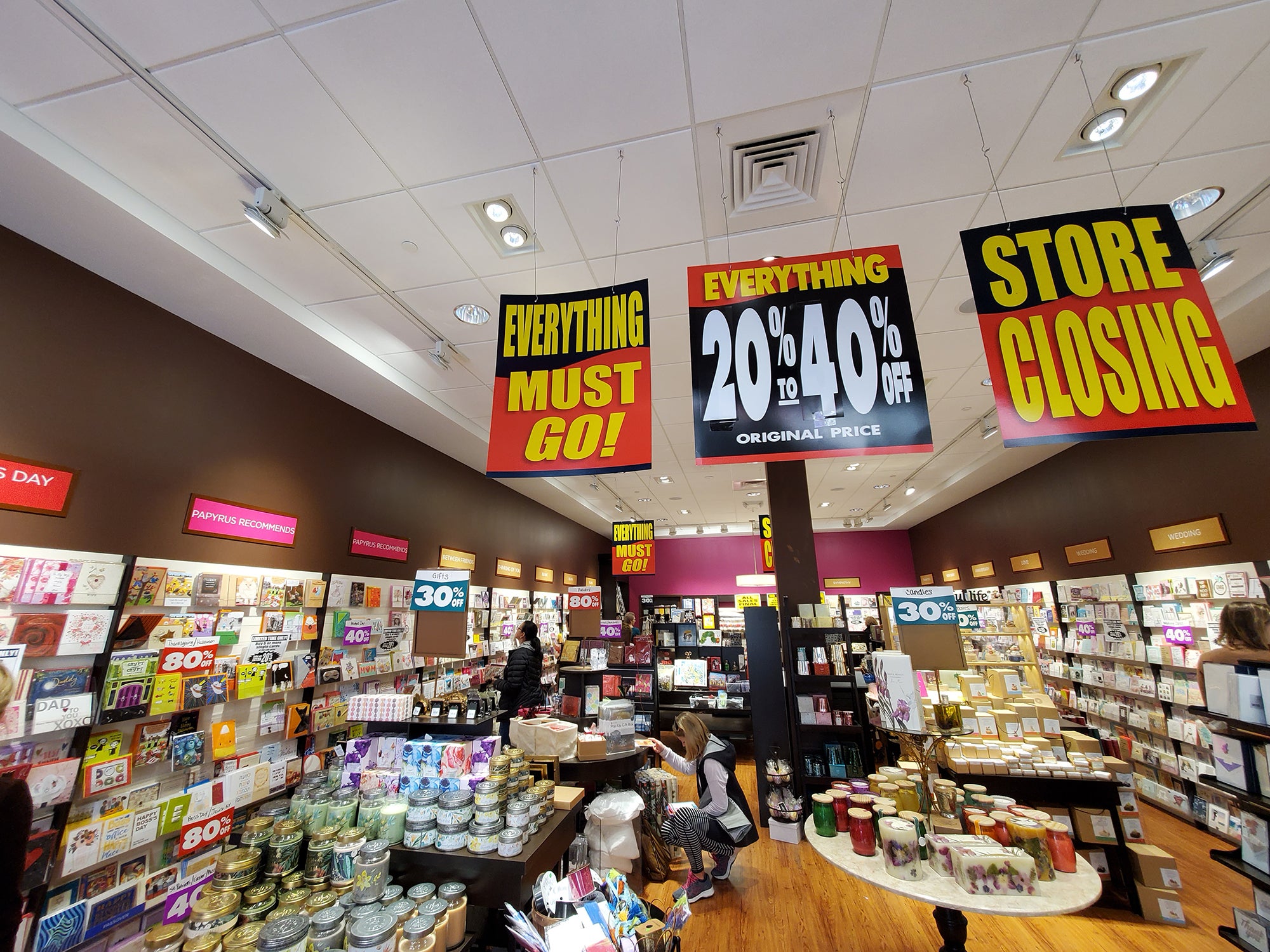 (CNN) — There’s no way to sugarcoat it: 2020 was a brutal year for restaurants and stores. The pandemic, massive amounts of debt and a shift in shopping as well as dining habits created a lethal cocktail of bankruptcies and closures.

New data from Coresight Research reveals American retailers have announced 8,400 closures this year. Ascena Retail closed the most locations, at nearly 1,200. Coresight anticipates closures will snowball and set a new record this year, breaking the 2019 record of 9,302 closures tracked by the firm.

Business is equally bleak for the US restaurant industry. About 17% of the country’s restaurants — roughly 110,000 — have permanently closed this year, with thousands more on the brink according to a recent National Restaurant Association report.

With lockdowns devastating retail and restaurants — many of which that were already in deep trouble, dozens declared bankruptcy this year.

Papyrus: The mall staple best known for selling stationery and upscale greeting cards went out of business, resulting in the closure of more than 250 stores across the US and Canada. Papyrus blamed an overexpansion of stores, the downturn in brick-and-mortar shopping and its inability to recover fully from the 2008 financial crisis.

Bar Louie: It was last call for about half of the 90 US locations of the casual restaurant chain, which is best known for its happy hour deals. The chain filed for Chapter 11 and came to an agreement with its lenders to purchase the chain through a bankruptcy sale.

Krystal: In its bankruptcy filing, the 88-year-old fast food chain blamed several contributing factors including increased competition, shifting consumer tastes and the rise of online delivery platforms. Krystal emerged from bankruptcy in May.

Pier 1 Imports: The home goods retailer filed for bankruptcy, following years of decline because of online competition and big-box chains. Pier 1, which once had more than 1,000 locations, cultimately closed all of its locations. In July, the brand name was purchased by an investment firm and will relaunch it as an online-only store.

Modell’s Sporting Goods: The family-owned chain founded in 1889, was known best for selling local teams’ jerseys and equipment for youth leagues. The bankruptcy resulted in permanent closure all of its 153 stores, primarily in the northeast. The same company that bought Pier 1 also bought Modell’s brand name in August for an online store.

True Religion: Temporary store closures and the work-from-home trend took its toll on the denim retailer. True Religion emerged from bankruptcy in October, and it managed to slashed its debt but closed dozens of locations.

J.Crew Group: The preppy retailer, which operates the J.Crew and Madewell brands, became the first national US retailer to file for bankruptcy protection since the pandemic forced a wave of temporary store closures. It exited bankruptcy in September with a smaller debt load and named a new CEO — its third in three years — in November.

Neiman Marcus: The 113-year-old upscale department store was hit especially hard by the nation working from home. It emerged from bankruptcy in September with billions of dollars less in debt and five fewer stores, including its flashy Hudson Yards stores that opened in New York City in 2019.

JCPenney: The pandemic was the final blow to a 119-year-old company struggling to overcome a decade of bad decisions, executive instability and damaging market trends. JCPenney shuttered about a third of its stores. The company was rescued in December by mall owners Simon Property Group and Brookfield Asset Management, which bought JCPenney out of bankruptcy.

Souplantation and Sweet Tomatoes: COVID-19 was a brutal blow for all-you-can-eat buffets, especially for this restaurant chain. It announced the closure of all of its 97 US restaurants and liquidated its assets.

Tuesday Morning: Another discount home goods retailer filed for bankruptcy in the spring, saying that the prolonged store closures caused an “insurmountable financial hurdle.” The Dallas-based chain permanently closed approximately 230 of its nearly 700 US stores in cities where “too many locations are in close proximity.”

GNC: The 85-year-old vitamin and dietary supplement company closed about 1,200 stores as part of its bankruptcy. GNC has has been saddled with nearly $1 billion of debt and has faced declining sales at its brick-and-mortar locations since before the pandemic. It’s in the process of selling itself to a Chinese pharmaceutical company

NPC International: The name of this huge franchisee might not sound familiar, but the stores it operates certainly have name recognition: 1,200 Pizza Hut and 400 Wendy’s restaurants throughout the United States. The company blamed its debt load of nearly $1 billion as well as rising labor and food costs for the bankruptcy. Weeks later, NPC announced that up to 300 of its Pizza Hut locations will close.

Brooks Brothers: The 200-year-old menswear retailer, which has dressed 40 US presidents and unofficially became the outfitter of Wall Street bankers, filed for bankruptcy. The privately held company had been struggling as business attire grew more casual in recent years and was especially damaged by the pandemic, which sent demand for suits plummeting. The brand was bought in September by Simon Property Group.

Sur La Table: The 50-year-old purveyor of upscale kitchenware filed for bankruptcy, resulting in the closure of roughly half of its 120 US stores. Sur La Table was sold for $90 million August to an investment firm.

Muji USA: The US arm of the Japanese retailer entered bankruptcy and closed a “small number” of its locations. Muji is using the process to emerge with a renewed focus on online sales.

Lucky Brand: The once-trendy denim company filed for bankruptcy, explaining in a release that the pandemic has “severely impacted sales across all channels.” Lucky Brand will immediately close 13 of its roughly 200 stores in North America, which are mostly in malls. It sold itself to SPARC Group, the owner of Nautica and Aéropostale, in August.

RTW Retailwinds: The owner of women’s retailer New York & Co. filed in mid-July. RTW Retailwinds, which has nearly 400 stores and 5,000 employees, closed hundreds of its locations. It blamed its collapse on the “challenging retail environment coupled with the impact of the pandemic” that has caused “significant financial distress.”

Ascena Retail Group: The owner of Ann Taylor, LOFT, Lane Bryant and other women’s clothng stores also filed for bankruptcy. Ascena, which was in deep financial trouble even before the pandemic, closed hundreds of its stores including all of its roughly 300 Catherines locations. It’s currently in the process of selling itself to a private equity firm.

California Pizza Kitchen: The 35-year-old pizza chain filed for bankruptcy because of restrictions on indoor dining in several US states. It used the process to reduce its debt and closed several unprofitable locations. CPK exited bankruptcy in mid-November.

Lord & Taylor: The once-snazzy upscale retailer filed for bankruptcy just a year after it was bought for $75 million. Hopes of keeping some of its stores quickly collapsed with the brand announcing a month later it was shutting all of them down, ending a nearly 200-year run.

Tailored Brands: The brand, which owns Men’s Wearhouse and Jos. A. Bank, filed for bankruptcy to cut down its debt. The filing followed a previous announcement that it was closing a third of its stores and cutting 20% of corporate positions. Tailored emerged from bankruptcy with a lighter debt load in December.

Stein Mart: The third major discount retailer filed for bankruptcy and closed its 300 US stores. The 112-year-old company blamed its failure on changing consumer habits and the pandemic, both of which “have caused significant financial distress on our business,” its CEO said. The brand was bought by an investment firm in December with plans to relaunch online.

Century 21: Beloved by New Yorkers, the department store chain shuttered its 13 locations ending a 60-year-old run. The company blamed the lack of payment on its business interruption insurance as the cause of its demise.

Sizzler USA: The restaurant chain, which was one of the country’s first casual restaurant chains, filed for bankruptcy because of COVID-19 lockdowns that forced it to temporarily close its restaurants’ dining rooms. The 62-year-old company said that it’s using the bankruptcy process to reduce debt and renegotiate its leases.

Ruby Tuesday: Anothercasual dining chain blamed the pandemic for its bankruptcy. Ruby Tuesday said it’s using the process to reduce its debt and operate as normally as possible. The privately held chain has closed roughly 200 locations within the past few years, with about 300 remaining globally.

Friendly’s: The East Coast diner chain best known for its “Fribble” milkshakes and sandwiches, filed for bankruptcy for the second time in less than a decade. It intends to “sell substantially all of its assets” to a private hedge fund company that owns other quick-service restaurants, including Red Mango and Souper Salad. Friendly’s has about 130 locations left, down from the 400 it operated about a decade ago.

Guitar Center: The 61-year-old company, the biggest musical instrument retailer in the United States, had tried to stay afloat during the pandemic by offering virtual music lessons, but ultimately filed for bankruptcy. Stores like Guitar Center depend on people making discretionary purchases have been among the worst-hit retailers this year.

Francesca’s: Malls were dealt another blow with the bankruptcy of this woman’s boutique. Francesca’s is closing about a quarter of its 700 stores, and it’s using the bankruptcy to obtain new financing and a possible sale.