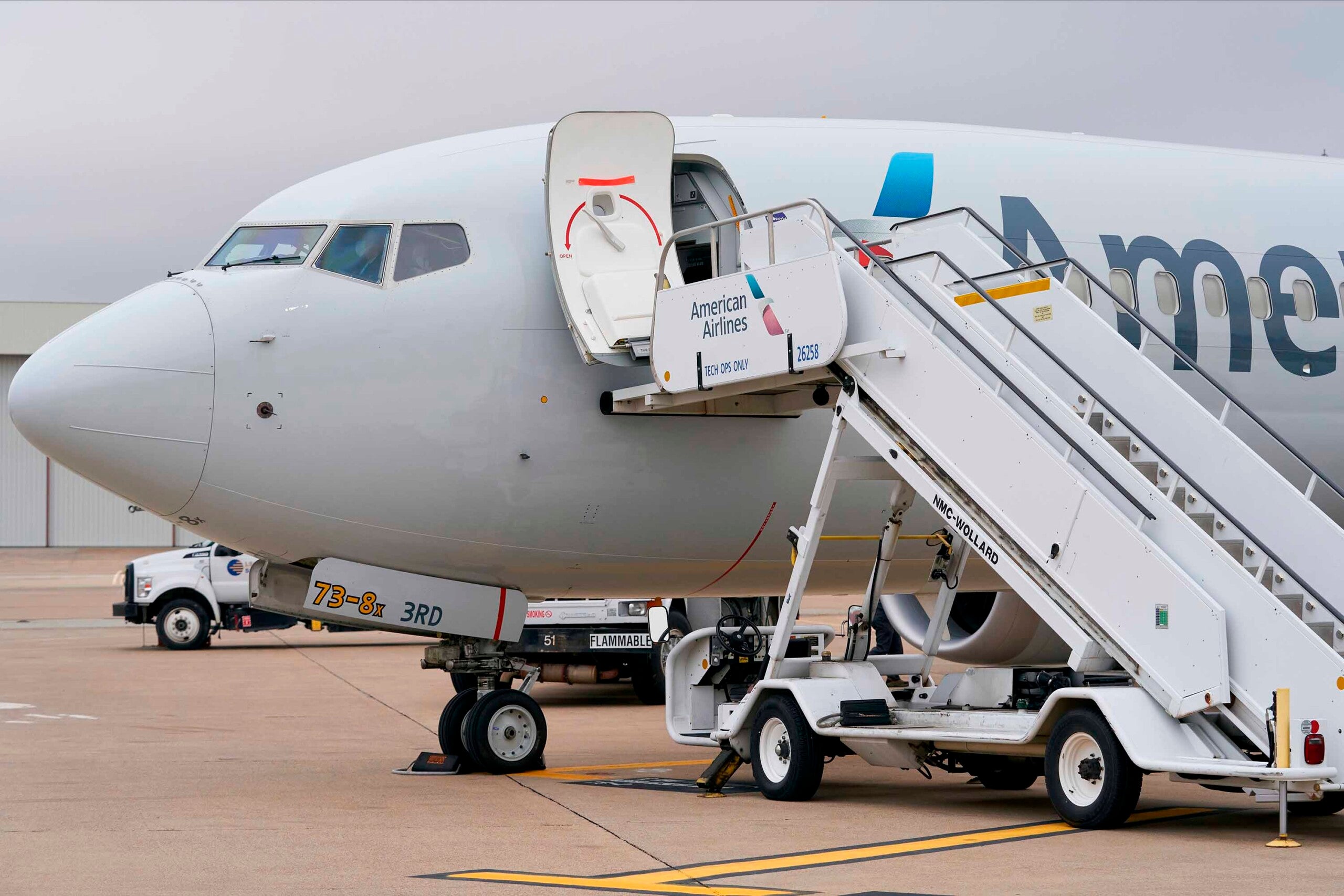 An exterior view of an American Airlines B737 MAX airplane is seen at Dallas-Forth Worth International Airport in Dallas, Texas on December 2, 2020. - The Boeing 737 MAX will take another key step in its comeback to commercial travel on December 2, 2020 by attempting to reassure the public with a test flight by American Airlines conducted for the news media. After being grounded for 20 months following two deadly crashes, US air safety officials in mid-November cleared the MAX to return to service following changes to the plane and pilot training protocols. (Photo by Cooper NEILL / AFP) (Photo by COOPER NEILL/AFP via Getty Images)
by: Chris Isidore, CNN Business
Posted: Dec 28, 2020 / 03:38 PM EST / Updated: Dec 28, 2020 / 03:41 PM EST

(CNN) — The Boeing 737 Max is set to carry U.S. passengers for the first time in nearly two years on Tuesday, when American will use the jet on a round-trip route from Miami to New York.

It will be a pair of notable flights for the 737 Max, which was grounded from March 2019 through November 2020 after two crashes that killed 346 people. The flights come after the U.S. Federal Aviation Administration last month approved changes Boeing made to the jet.

But some U.S. fliers are nervous: A new poll out Monday from Reuters/Ipsos found that 57% of Americans surveyed said they were not likely to fly in a Boeing 737 Max, when they were informed about the plane’s history. About 37% say they would be likely to fly in it once it has been in the air for six months or more.

Still, the same poll showed some people are either not aware of the 737 Max’s history or have forgotten about the jet’s issues. Of the U.S. fliers surveyed, 39% said they were familiar with the Lion Air and Ethiopian Airlines crashes in October 2018 and March 2019, down from about 50% in a previous poll.

American would not disclose how many seats it has sold on Tuesday’s flights, a 10:32 am ET route from Miami to New York’s LaGuardia Airport, and a return at 2:30 pm. But as of late morning Monday, the airline’s site showed only one main cabin ticket still available for the afternoon return.

Most other countries’ aviation authorities have yet to approve the use of the 737 Max. But Brazilian airline GOL became the first carrier to offer passenger flights earlier this month, and Aeromexico resumed flights with the plane last week between Mexico City and Cancun.

Two other U.S. airlines own the troubled jet: United Airlines and Southwest, neither of which have added the plane to their schedule as of yet. United said it plans to do so sometime in the next three months, while Southwest anticipates doing so in the spring.

Almost all airlines globally have parked many of the jets they own, given the pandemic-fueled lack of demand for air travel — so there is less immediate need to get the planes back in the air. But the 737 Max is more fuel-efficient than the earlier versions of the plane now in use, so airlines have an interest in getting the Max back into the air.