US airline industry seeks about $50 billion in federal help 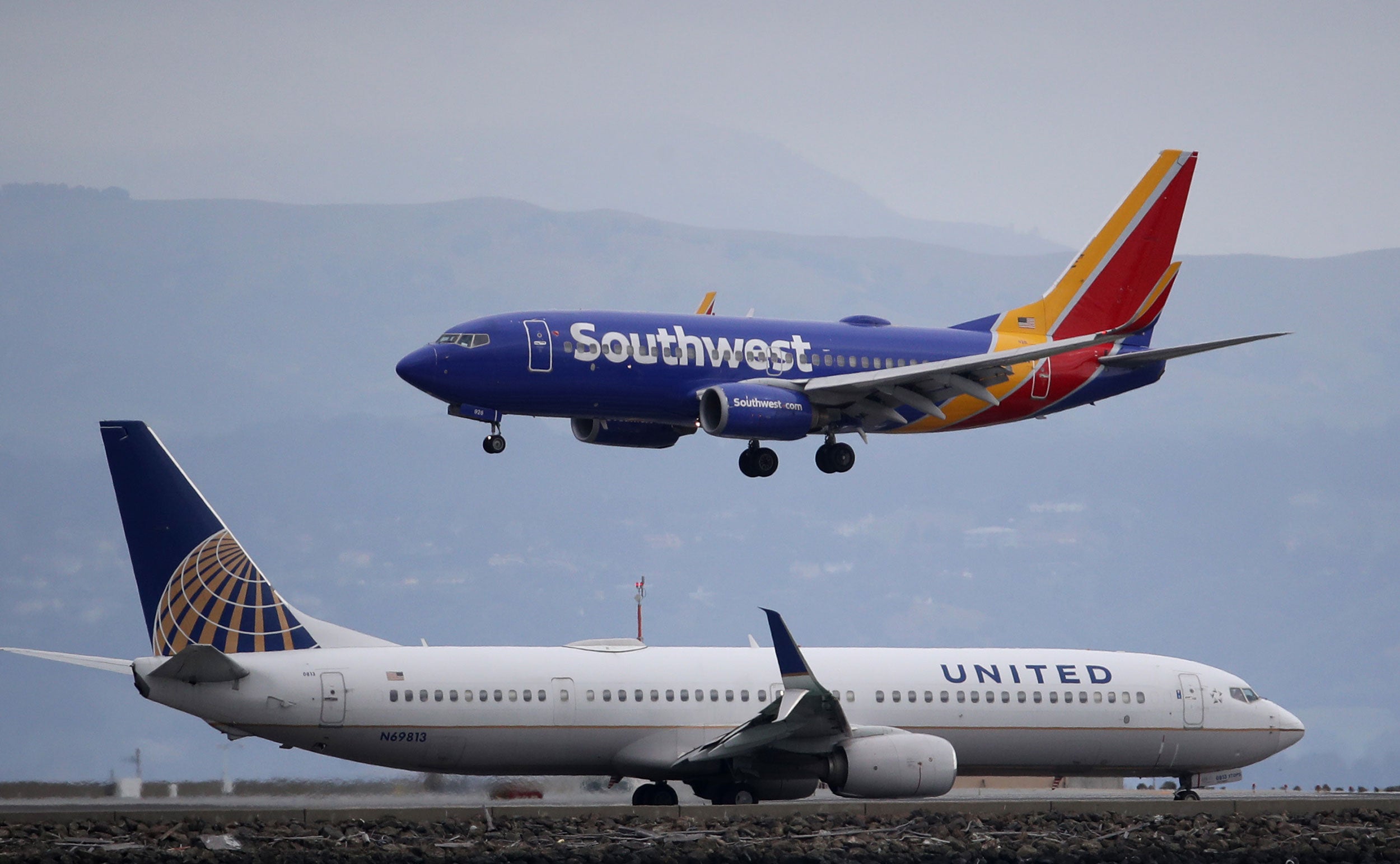 BURLINGAME, CALIFORNIA - MARCH 06: A Southwest Airlines plane lands next to a United Airlines plane at San Francisco International Airport on March 06, 2020 in Burlingame, California. In the wake of the COVID-19 outbreak, airlines are facing significant losses as people are cancelling travel plans and businesses are restricting travel. Southwest Airlines says they expect to lose between $200 to $300 million dollars in the coming weeks. Other airlines like United and Jet Blue are cutting flights. The International Air Transport Association predicts that carriers could lose between $63 billion and $113 billion this year. (Photo by Justin Sullivan/Getty Images via CNN)
by: Gregory Wallace, Phil Mattingly, Kylie Atwood and Chris Isidore, CNN
Posted: Mar 17, 2020 / 05:49 AM EST / Updated: Mar 17, 2020 / 05:49 AM EST

(CNN) — US airlines slammed by the coronavirus are requesting an aid package from the federal government that could amount to about $50 billion, according to industry group Airlines for America.

The requested aid would be in the form of loans, grants and tax relief. The airlines are looking for up to $25 billion in grants for passenger air carriers and $4 billion in grants to cargo carriers, and the same amounts in loans or loan guarantees, Airlines for America outlined in a briefing document.

“US carriers are in need of immediate assistance as the current economic environment is simply not sustainable,” the group said in a statement. “This is compounded by the fact that the crisis does not appear to have an end in sight.”

The US airlines are not the only ones asking for help from their national governments in the face of the sharp decline in travel. Monday the three biggest global airline alliances, oneworld, SkyTeam and Star Alliance, urged governments around the world to “evaluate all possible means” to assist the industry. They represent more than 58 of the world’s leading carriers.

The US aid package has been discussed with key lawmakers and staff, as on Capitol Hill and the Trump administration, two sources said.

The discussions were described as early-stage. But one source noted there is a growing recognition from the federal government that conditions “are getting very bad, very fast.”

In addition the request to help the airlines, a trade group for the nation’s airports is requesting a separate $10 billion bailout, an airport industry source told CNN.

The request for help is in line with anticipated airport revenue declines tied to the sharp drop in revenue that comes from airlines slashing their flight schedules. Most of the fees airlines pay to airports are based on the number of flights that take off and land.

The plane manufacturer Boeing on Monday also said it is talking to “government and industry leaders.”

“We’re leveraging all our resources to sustain our operations,” said spokesperson Gordon Johndroe. “Meanwhile, ready short term access to public and private liquidity will be one of the most important ways for airlines, airports, suppliers and manufacturers to bridge to recovery, and we appreciate how the Administration and Congress are engaging with all elements of the aviation industry during this difficult time.”

Most of America’s major airlines are projected to run out of cash some time between June 30 and the end of the year without help, according to Airlines for America.

But the crisis may actually be more pressing than that.

If the nation’s credit card companies start to withhold payments to the airlines out of fear that there could be bankruptcy filings that would turn them into creditors, the airlines could run out of cash before June 30, according to the trade group.

The concept of a bailout for airlines got an endorsement from President Donald Trump at his briefing on the virus on Monday.

“We’re going to back the airlines 100%,” said Trump, saying that their financial problems is “not their fault. It’s nobody’s fault.”

The need for the bailout is a stunning reversal of position for the industry and a sign of just how quickly the demand for air travel in the nation has ground to a near halt.

When airline executives met at the White House with Trump and Vice President Mike Pence on March 4, they did not ask for a bailout. And as recently as Tuesday, executives from most of the nation’s airlines told investors at a JPMorgan online investor conference that they were not seeking any kind of government assistance.

“We are not going to count on any kind of government intervention,” said United Airlines President Scott Kirby at the time.

But on Sunday night Kirby and United CEO Oscar Munoz told United’s 100,000 employees that the airline would cut capacity by 50% in April and May, and it expected that only 20% to 30% of the seats on those remaining planes would be filled.

That is far, far below what United needs to break even. In 2019 the carrier filled 84% of the seats it sold.

On Sunday, United management started discussions with the airline’s unions on ways to cut compensation costs, the largest expense at the airline. It has already offered unpaid leave to employees and it may have to make changes to pay rates or furloughs.

The pilots union at United said in a letter to its membership that it will work with management to limit the losses in order to protect “the financial future of our airline.”

But it also said that the unions and management would announce a “call for action” this week to seek government assistance.

The discussions on possible help for the airlines has been fast moving, sources tell CNN.

“This is a roller coaster, and discussions are evolving by the hour,” one source familiar with the discussions told CNN. The source said that they are hoping that there is an agreement over the package over the next days and weeks, not months. They are hoping that by having laid out their request, they can speed up the process.

There are about 460,000 jobs in the US airline industry, according to the Labor Department, and most of them provide good pay and strong benefits.

Commercial aviation taxes and fees reached $26 billion in 2019, or about $71 million per day, according to Airlines for America, the trade group for the domestic industry.

Billions of that total are paid by airline passengers, not the airlines, although lifting fees and taxes would reduce the price of airline tickets and could spur increased demand.

But not even low fares are likely to get passengers back on planes amid warnings by public health officials that people should stay at home and avoid travel unless absolutely necessary.

“When medical experts say that our health and safety depends on people staying home and practicing social distancing, it’s nearly impossible to run [an airline] business,” said United executives Munoz and Kirby in their letter to employees.

But despite his broad support for helping the US airlines, President Donald Trump has discussed the possibility of imposing restrictions on domestic air travel recently, although nothing along those lines has been announced.

US airlines received a $15 billion bailout in the form of $5 billion in cash and $10 billion in loan guarantees following the 9/11 terrorist attack.