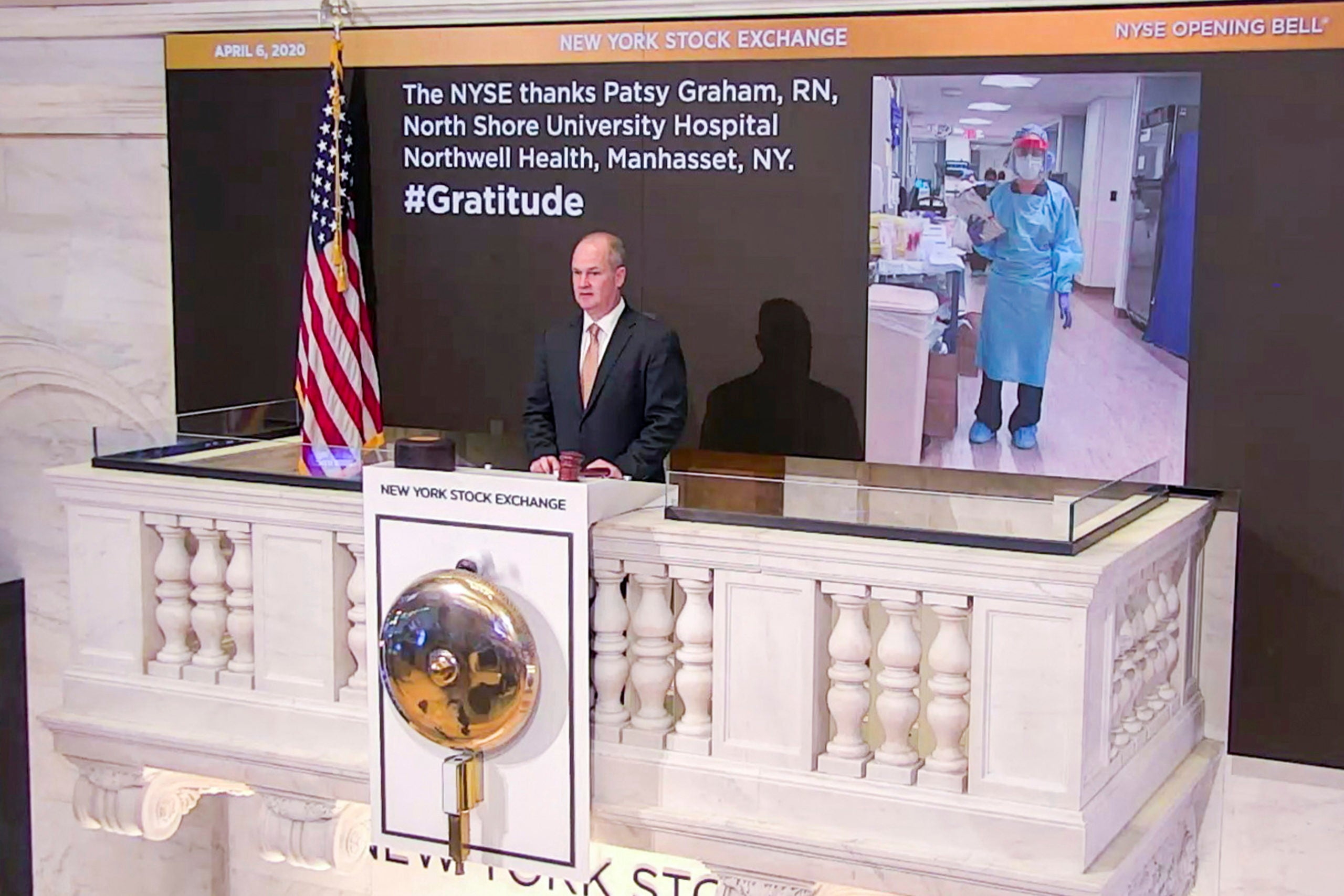 In this photo taken from video provided by the New York Stock Exchange, Chief Security Officer Kevin Fitzgibbons rings the opening bell at the NYSE, Monday, April 6, 2020, recognizing Patsy Graham, a registered nurse at North Shore University Hospital Northwell Health, in Manhasset, NY. Stocks jumped in markets around the world Monday after some of the hardest-hit areas offered sparks of hope that the worst of the coronavirus outbreak may be on the horizon. (New York Stock Exchange via AP)
by: STAN CHOE and ALEX VEIGA, AP Business Writers
Posted: Apr 6, 2020 / 04:45 PM EST / Updated: Apr 6, 2020 / 04:45 PM EST

NEW YORK (AP) — Investors grabbed hold of a few glimmers of hope Monday that the coronavirus pandemic could be slowing and sent stocks surging in a worldwide rally, capped by a 7% leap for the U.S. market.

The number of new coronavirus cases is dropping in the European hotspots of Italy and Spain. The center of the U.S. outbreak, New York, also reported its number of daily deaths has been effectively flat for two days. Even though the U.S. is still bracing for a surge of deaths due to COVID-19 and New York’s governor said restrictions should stay in place to slow its spread, the sparks of confidence were enough to launch the S&P 500 to its best day in nearly two weeks.

The gains accelerated throughout the day, and markets in Europe and Asia rose nearly as much. In another sign that investors are feeling a bit less pessimistic about the economy’s path, they sold bonds. The yield on the 10-year Treasury rose for the first time in four days.

Investors have been waiting anxiously for signs that the rate of new infections may hit its peak, which would give some clarity about how long the upcoming recession will last and how deep it will be. Without that, markets have been guessing about how long businesses will remain shut down, companies will lay off workers and flights remain canceled due to measures meant to slow the speed of the outbreak.

“The virus is not everything, it’s the only thing, and nothing else really matters” to the markets, Frederick said, particularly in a week that is relatively light on economic reports.

The S&P 500 climbed 175.03, or 7%, to 2,663.68, and nearly all the stocks in the index were higher. It more than recovered all its losses from the prior week, when the government reported a record number of layoffs sweeping the economy.

The latest gains are not likely to have much staying power, given how much uncertainty remains about when the pandemic will subside significantly and how much harm will have been inflicted to the economy, said Nela Richardson, investment strategist at Edward Jones.

“It’s not unusual, if you look back historically, within bear markets to have rallies,” Richardson said. “I wouldn’t take the uptick over the last two weeks as a sign of a bottoming or a sign of upside recovery from here on out. There’s still a lot of uncertainty to get through even as we’re hopefully nearing the peak in terms of new coronavirus cases.”

The S&P 500 is still down more than 21% since its record set in February, but the losses have been slowing since Washington promised massive amounts of aid to prop up the economy.

“Since this is a public health crisis, the response has been extreme,” Morgan Stanley strategists wrote in a report. “There are literally no governors on the amount of monetary or fiscal stimulus that will be used in this fight.”

In Japan, the prime minister said he’s preparing to announce a 108 trillion yen ($1 trillion) package to bolster the world’s third-largest economy. It would be Japan’s largest-ever package for the economy and nearly twice as much as expected.

Japan’s economy was already shrinking late last year before the outbreak forced the global economy into a protective coma induced by health authorities.

The yield on the 10-year Treasury yield rose to 0.66% from 0.58% late Friday. Yields tend to rise when investors are raising their expectations for economic growth and inflation.

Crude oil fell, giving up some of its huge gains from the prior week when expectations rose that Saudi Arabia and Russia may cut back on some of their production.

Demand for oil has plummeted due to the weakening economy, and any cutback in production would help prop up its price. A meeting between OPEC, Russia and other producers initially planned for Monday, though, was reportedly pushed back to Thursday.