Will gyms go the way of arcades and movie rental stores? 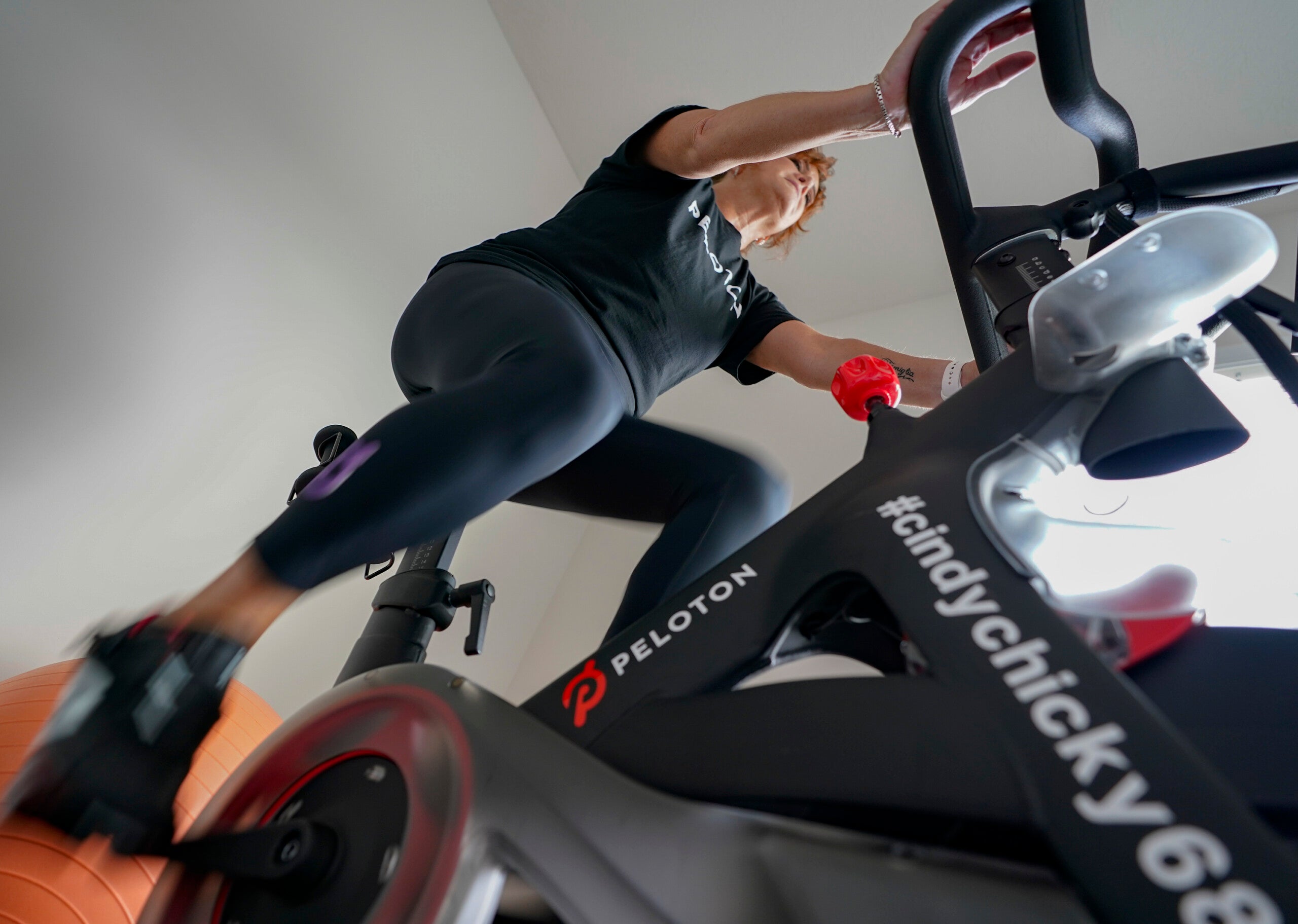 In this photo made on Sunday, Aug. 8, 2021, Cindy Cicchinelli uses her Peloton exercise machine in the workout room of her Pittsburgh townhouse. Cicchinelli says she has become a dedicated Peloton user after going to her gym in Pittsburgh for years, she said the convenience is what has sold her. The pandemic is reshaping America's fitness industry and ushering in a new era of home workouts and virtual classes. High-end exercise equipment maker Peloton is breaking ground Monday, Aug. 9, 2021, on its first U.S. factory in Ohio. (AP Photo/Keith Srakocic)
by: JOHN SEEWER, Associated Press
Posted: Aug 9, 2021 / 11:46 AM EST / Updated: Aug 9, 2021 / 11:46 AM EST

(AP) — Going to the gym was always part of Kari Hamra’s routine until last year’s government-ordered shutdowns forced her to replace the workouts with daily rides on her Peloton stationary bike.

That’s when she discovered something surprising — she did not miss the gym. At least not the driving back and forth, filling water bottles, changing clothes and most of all, taking time away from her husband and two boys.

Now that her gym in Springfield, Missouri, is open again, she’s slowly returning. But finding a more convenient exercise schedule at home and seeing a surge of COVID-19 cases in her hometown this summer have her questioning how much she needs the gym. She figures that if there never had been a coronavirus outbreak “I would still be a gym rat.”

The pandemic has reshaped how Americans exercise and upended the fitness industry, accelerating the growth of a new era of high-tech home workout equipment and virtual classes.

Thousands of small fitness centers and studios that were forced to close a year ago now are gone for good. Others are struggling to stay afloat and have redesigned their spaces, turned toward more personal workouts and added online training.

The question is: Can they survive the onslaught from the apps, pricey bikes and treadmills or will they go the way of arcades, video rental shops and bookstores?

Interactive fitness equipment maker Peloton is betting the workout-from-home trend is here to stay. It’s breaking ground Monday on its first U.S. factory just outside Toledo, Ohio, where it plans to begin production in 2023 and employ 2,000 workers.

Demand surged so much during the pandemic that some Peloton customers had to wait months for their bikes. While the company said the backlog has waned, it reported that sales have continued to soar, up 141% in the first three months of this year.

Company founder and CEO John Foley thinks it’s inevitable that technology-driven home fitness will become dominant much like how streaming services have changed movie watching, calling the idea of going to a gym “a broken model of yesteryear.”

Its next steps include bringing more of its equipment into gyms at hotels, apartment complexes and college campuses and launching new workouts through its app. Late last year, it acquired Precor, a company with manufacturing and product development sites in the U.S.

“Fitness is one of the few remaining categories that is going to be massively disrupted by a digital experience,” Foley said.

During the early months of the pandemic, most small and independent gyms and studios turned to Zoom and other video platforms for yoga and Pilates classes and training sessions because it was the only way they could connect with their members.

“Now there’s an expectation for it,” said Michael Stack, CEO of Applied Fitness Solutions, which has three fitness centers in southeast Michigan.

Small gyms can’t match the production quality and visual appeal of the high-tech companies, but they can counter with online offerings that feature personal attention and closer relationships between their members and staff, he said.

“I think that’s the way we even the playing field,” Stack said.

Not all gym operators are convinced virtual training will play a significant role in what they offer.

“We don’t have the budget to do it at the same price and the same quality,” said Jeff Sanders, CEO of Apex Athletic Health Club in Penfield, New York. “Digital is great, but we’ve seen surveys that show people want to stay active, but miss the interaction and being around others.”

His company is planning to open a third, smaller location near Orlando, Florida, that offers a more intimate experience. Those type of boutique studios could be the wave of the future, he said.

The pandemic has changed how the fitness industry evaluates itself, and right now, “everyone’s making decisions just to survive,” Sanders said.

Roughly 9,000 health clubs — 22% of the total nationwide — have closed since the beginning of the virus outbreak and 1.5 million workers lost their jobs, according to the International Health Racquet & Sportsclub Association.

The industry group is lobbying Congress to approve a $30 billion relief fund for the fitness industry because many clubs are struggling to recover from months of lost revenue and membership declines and still owe back rent.

While more closings are likely this year and could number in the thousands without government help, the emergence of the workout-from-home trend won’t spell doom for the fitness centers, said Helen Durkin, the association’s executive vice president of public policy.

Plenty of exercise fanatics, she said, will still do both — 40% of Peloton users have gym memberships, according to the company.

There’s no doubt digital fitness is here to stay, said Michelle Segar, director of the University of Michigan’s Sport, Health and Activity Research and Policy Center.

“People are integrating their lives with technology. This is where society is, and it’s just going to get more integrated,” she said.

The biggest positives with the virtual training sessions are that they offer more flexibility when it comes to staying with workout routines and can draw more people into fitness, including those who can’t follow a rigid schedule.

“That’s why people don’t stick with it,” she said.

Cindy Cicchinelli, who’s become a dedicated Peloton user after going to her gym in Pittsburgh for years, said the convenience is what has sold her.

“I can roll out of bed and not worry about running to the gym,” she said. “And I don’t have to add an extra half-hour for my commute.”

Fitness industry leaders say research has shown that health clubs pose no more risk of spreading the virus than other public spaces. But San Francisco gym owner Dave Karraker thinks it will be a long time before many people are comfortable going into a big, tightly packed fitness center.

“They are going to be thinking about ventilation and air purifiers and how long ago was this equipment sanitized,” he said.

He reconfigured MX3 Fitness’s two small studios and created personal workout spaces. It has become so popular he’s looking for a third location.

He’s not surprised that people are coming back even though safety remains a concern.