Businesses take Hoosier Hospitality into their own hands 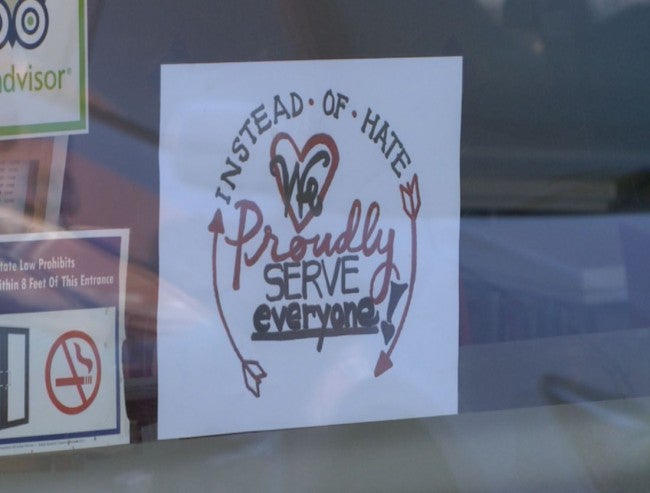 Business leaders and business owners are also aiming to limit the negative impact the law could have, and make sure the city doesn’t revert back to Naptown USA .

“Obviously everyone is welcome,” said Anne Carroll,  a restaurant worker, and founder of We Never Serve Hate. “We’re here to fight the good fight. So don’t run away from Indiana, come to Indiana and help us.”

Signs are now going up on business’ doors saying they ‘proudly serve everyone.’

It’s money they fear they could lose. Tourism is a $10 billion industry, which is anchored on the city’s conventions.

“The total economic fallout I think is to be determined here in the coming weeks and months,” said Chris Gahl with Visit Indy. “When you look at some of these conventions, conventions range from 50 people to 50,000 people. Some stay two nights some stay four nights.”

But despite the new challenge the law could present, Gahl says he’s optimistic.

“At the end of the day, based on the fact that this city has progressed over 30 years and where we’ve been able to arrive, we will triumph,” said Gahl.

Governor Pence, and the law’s supporters say the religious freedom law is needed to prevent business owners from going against their religious convictions, and be required to offer a service.

As those same lawmakers go back to clarify to say it won’t lead to discrimination, business groups are looking to make sure you know they’re open to everyone

“One man’s pen swipe did not take away Hoosier Hospitality it’s something that will never go away,” said Carroll.

We Never Serve Hate is planning a rally and march on April 13 to support local businesses. Carroll says the hope is that the positive message of Hoosier Hospitality goes as viral as the #BoycottIndiana message.