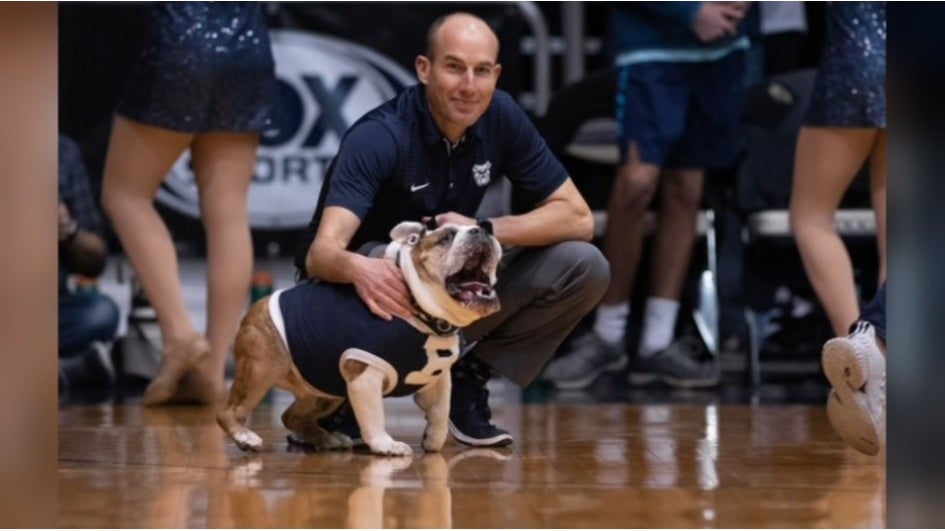 INDIANAPOLIS (WISH) — A Butler University alumnus most recognizable as the school mascot’s caretaker let his own needs take center stage Saturday in a social media post shared by hundreds.

Michael Kaltenmark, a 2002 graduate and longtime university spokesperson often seen at athletic games with English Bulldog “Blue,” took to Twitter to expand his search for a living organ donor.

“I need a kidney,” the caption on his post began. “Could be yours, someone you know, or even a complete stranger. I just need a kidney donation.”

Kaltenmark was diagnosed with Crohn’s disease 20 years ago and treated with an improperly monitored medication that caused kidney damage, he told News 8.

Although his Crohn’s went into remission following infusion treatments and he was able to “live a normal life for many years,” Kaltenmark said his kidney function never fully rebounded.

“The damage was done,” he said. “Over the last year, my kidney function began to decline even more. In December, my doctor said it was time to get me on the transplant list.”

He called the news “sobering” but said it opened his eyes to the “many blessings” he enjoyed — namely, his family.

Kaltemark’s two older brothers underwent testing to determine if either could be a donor match.

Doctors encouraged him to “cast a wider net” and seek out more potential donors as they awaited results.

“I still feel bad asking,” he admitted. “But I said, ‘Fine.’ I didn’t want to do it but they advised me to do it. When your doctor tells you to do something, you do it. So I put the word out on social media.”

The response was “overwhelming,” he said Saturday night, growing emotional as he watched the numbers under his Tweet steadily climb.

He could wait up to seven years on the national organ transplant list if a living donor isn’t found.

A caretaker at heart, always putting the needs of others above his own, Kaltenmark said what he valued most was the opportunity to raise awareness for others in the same position.

“Maybe I’ll be lucky enough to get a kidney out of this,” he told News 8. “But I’m not the only one. There are so many people walking around with perfectly healthy kidneys — one of which they could do without — and so many people they could help.”

However, doctors are unable to perform the surgery Kaltenmark jokingly said he would immediately agree to.

“If there was this thing [where] you could take a canine’s kidney and put it in a human, I’d already be done with it!” he told News 8.

Living donor evaluation forms can be filled out and submitted online.